Home News Featured Report on Shuyoka 2020: A Close Look at the Students

Report on Shuyoka 2020: A Close Look at the Students 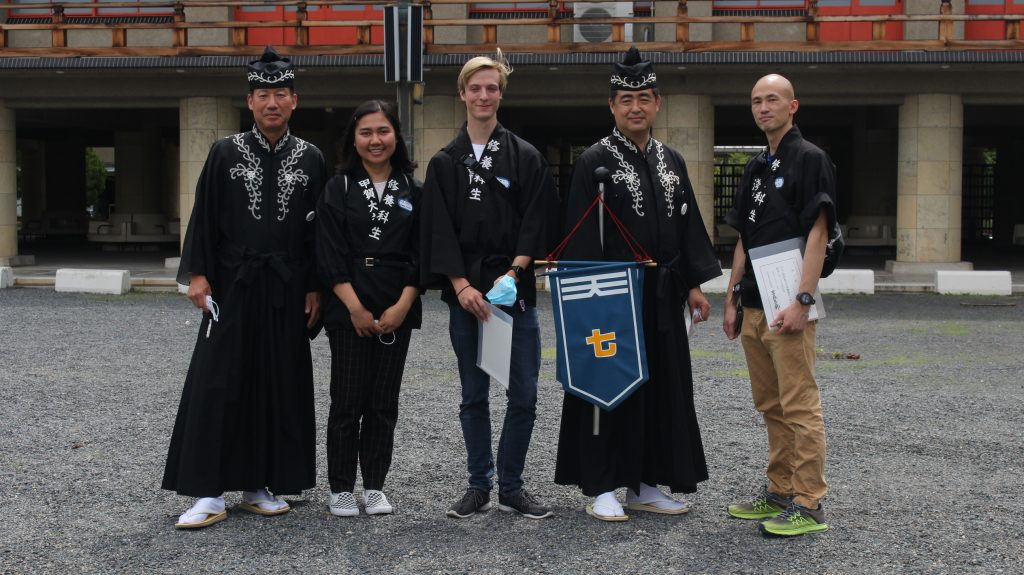 As reported in May, the 46th English Class of Shuyoka (the three-month Spiritual Development Course) began in the Home of the Parent on April 1 as part of the 948th session of Shuyoka. This year, there were four students from three countries: Tetsuyuki Kawai and Jason Toru Miyauchi from the United States; Ritchie Venice Chavez Rafols from the Philippines; and Benjamin Jørgensen from Norway. The 948th session of Shuyoka came to a close on June 27 as the students of the English class completed the three-month program with joy in their hearts with the support of their homeroom instructor, Rev. Robert Susumu Yuge, and their assistant instructor, Rev. Fusao Yamazaki.

This year’s English class of Shuyoka was conducted amid the ongoing coronavirus pandemic, which made it impossible for a number of prospective students to return to Jiba to attend the course. The pandemic has also had an impact on the way the program was run. “The 948th session of Shuyoka was held with many adjustments due to COVID-19,” says Jason. He explained that one of those adjustments, which were made to curb the spread of the coronavirus, was holding the morning assembly separately in each homeroom class from early April to mid-June rather than having all students gather in front of the East Left Wing 4 of the Oyasato-yakata building-complex. Another student shared his view of how the pandemic defined many of his experiences at Shuyoka. “I would like to highlight everything that happened with COVID-19,” says Tetsuyuki. “From the beginning, so many things happened due to the pandemic. I sincerely care and hope for those affected by COVID-19, but I am also grateful for everyone and everything that occurred.”

Drawn from Different Walks of Life

The English class of Shuyoka brings together people from various countries and regions across the world. This year’s students embarked on the three-month-long spiritual journey for various reasons. For Benjamin, who attended Shuyoka at the recommendation of his Japanese fiancée and her father, the decision to attend the course was also born out of his personal quest. “I also wanted to take this opportunity to learn about Tenrikyo as deeply as possible, especially because I had previously written a thesis on Tenrikyo at my university in Norway,” says Benjamin. The desire to learn more about the teachings was also what brought Ritchie Venice to Jiba. She decided to attend the English class after learning about Oyasama through an English book. “My church head minister explained Tenrikyo to me, but because I could not understand Japanese, he gave me a copy of Tale of Oyasama, which is an English translation of the manga rendition of The Life of Oyasama,” she says, adding: “Reading the book gave me a feeling of joy, and I was especially touched by the story of Oyasama’s hardships and miracles. I felt that I wanted to learn more about Tenrikyo, so that is why I came to attend Shuyoka this time.”

Compared to Benjamin and Ritchie Venice, who are relatively new to the faith of Tenrikyo, Tetsuyuki and Jason came to attend Shuyoka to explore the faith that they had already been familiar with. “On a personal level, I was motivated to go to Shuyoka to learn more about the religion that I grew up with and see where it actually fits in my life,” says Tetsuyuki, adding that he wanted to see for himself what the faith his parents had encouraged him to follow would mean to him. For Jason, who had graduated from Tenri Junior Seminary and subsequently worked at Church Headquarters’ Overseas Department, his personal causality is what brought him to attend this year’s English class of Shuyoka. Noting that the two instructors had a close connection with his mother at the Oyasato Seminar, a training program intended for followers of high school age from overseas, he expressed his feelings of how the instructors and students of this year’s English class were brought together through the parental love and guidance of God the Parent and Oyasama.

Learning and Implementing the Teachings

During the three months of Shuyoka, the students of the English class learned the teachings through lessons on The Doctrine of Tenrikyo, The Life of Oyasama, and the Mikagura-uta, The Songs for the Service, as well as service dance practices. In addition, they practiced the musical instruments for the service as well as engaged in hinokishin activities. “Shuyoka is a wonderful place, which has provided us with important knowledge about the path,” notes Benjamin. “During hinokishin, we shared many things with one another and freely asked the instructors any question we wanted to ask. Being in a small class of four, I was able to ask questions more easily.” The unique learning environment that the relatively small size of the class provided was also highlighted by Jason: “Through Shuyoka, I think we all learned many things about the teachings. Since there were only four students, I believe the teachers were able to teach us more than they initially expected to.” Apart from what they learned in classroom settings, some of the students shared their experiences regarding the service and the Sazuke. Jason talked about how his way of performing the seated service changed after attending a lecture that explained a sincere and proper way of performing the seated service. Concerning the Sazuke, Ritchie Venice noted how she was moved when a Shuyoka student who had lost feeling in her legs became able to walk again one or two weeks after other Shuyoka students administered the Sazuke to the student.

As for life after Shuyoka, the students expressed their hopes of how they would like to continue to follow the path as they moved on to the next chapter of their spiritual journey. Benjamin, who was to do hinokishin at his grand church after completing Shuyoka, mentioned his plan to keep learning the teachings. “I’m determined to read the Osashizu and the Anecdotes of Oyasama step by step in order to seek the exemplary way of living in my daily life,” he said, adding that he would like to attend the Lay Minister Preparatory Course in the future. Tetsuyuki said he hoped to stay connected with the path through a daily routine such as cleaning his neighborhood as well as continuing to attend the monthly service of his church in the United States. Ritchie Venice, who is determined to do what her church head minister would like her to do in following the path, expressed her hope of performing the service dance and playing women’s instruments at the monthly service of her church. For Jason, the next milestone toward which he intends to work hard is the 130th anniversary of his grand church to be commemorated in 2022.