The September Monthly Service of Tenrikyo Church Headquarters was conducted on the 26th in the Main Sanctuary with the Shinbashira presiding as chief officiant.

The Shinbashira began the Service prayer by expressing gratitude for the boundless blessings through which God the Parent, out of deep parental love for all human beings, constantly watches over us and guides us to the Joyous Life. He then pledged that all church head ministers and Yoboku would keep their minds connected with God the Parent and Oyasama, commit themselves in high spirits to actualizing the Joyous Life, and take steady steps in achieving their own spiritual growth. Further, noting that September is the month designated for making a focused effort to sprinkle the fragrance of the teachings and that Tenrikyo Nioigake Day would be conducted over the last three days of the month, the Shinbashira said, “All Yoboku, following the example set by the church head ministers, will strive to sprinkle the fragrance of the teachings and thereby make repayment for Your blessings.” 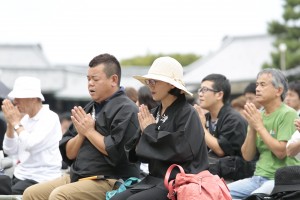 The prayer was followed by the joyous performance of the Kagura Service and the Dance with Hand Movements. The followers joined in the performance by singing the songs for the Service with their minds in unison.

After the Service performance, Honbu-in Hirokazu Moroi took the podium to deliver the sermon, in which he focused on the practice of hinokishin, which refers to any proactive and selfless action taken to make repayment for God’s constant providence. He began by reviewing the history of hinokishin and spoke about some of the hinokishin activities that have been carried out by the Tenrikyo community over the years.

Maintaining that “the construction of the Sanctuary, the Residence of God, offers the greatest arena for sowing seeds of sincerity,” he went on to speak about the Oyasato Construction Young Men’s Association Hinokishin Corps, which was established in 1954 to help with the construction of the Oyasato-yakata building-complex, the Residence of God’s children. With regard to his own participation in that corps, he said, “In the course of devoting myself to the tasks we were given, a feeling of joy mysteriously arose in my mind, allowing me to experience a small portion of the Parent’s love.”

After describing the efforts of hinokishin made by Izo Iburi and Chushichi Yamanaka during the construction of the Place for the Service in 1864, Rev. Moroi quoted the following passage from the Divine Directions: “Speaking of carrying earth, carrying earth. . . . They will return here daily with their hearts full of delight, regardless of their struggles, regardless of the responsibilities where they live. For carrying even one basket of earth, how great their reward! It cannot be fathomed” (Osashizu, March 13, 1907). He explained this passage by saying: “Devoting efforts of hinokishin to the Residence may entail some difficulties, but so long as it is done with a fervent desire to make repayment for the blessings one has received, any effort, even carrying one basket of earth, will have immeasurable value.”

Rev. Moroi then emphasized that, fundamentally, hinokishin entails “forgetting greed” while making wholehearted efforts to make repayment to God the Parent. “So long as we have a fervent desire to make repayment for God’s blessings and set about doing it in a manner that is free of greed,” he continued, “it will be the sort of hinokishin that can be accepted by God, no matter what form it may take or where it is done.”

Next, he touched on the “attitude of hinokishin,” which is one of the Three Guiding Principles proposed by the second Shinbashira shortly after the 70th Anniversary of Oyasama (which was observed in 1956). Rev. Moroi suggested that, whatever the situation is, our actions that reflect the “attitude of hinokishin” will amount to the sort of hinokishin that measures up to Oyasama’s expectations and assuredly allow the true and certain path to come into view.

To conclude his sermon, the speaker pointed out the need for Yoboku and followers to nurture others. Explaining that the Parent has entrusted them with a responsibility to nurture others, he called on the listeners to first make repeated efforts to achieve their own spiritual growth and to go through each day while maintaining the “attitude of hinokishin.”

The Autumn Memorial Service was conducted on the following day, September 27. The Memorial Service began in the Main Sanctuary with the reading of the prayer, which was followed by the performance of the Eight Verses of the Yorozuyo and the Twelve Songs. The Shinbashira then proceeded to the Memorial Hall and read a prayer honoring the virtues of those who dedicated their lives to the cause of the path.