From September 18 to 20, the International Meeting of Prayer for Peace was held in Assisi, a city located in central Italy, drawing approximately 500 religious leaders, researchers, and government officials from many parts of the world. This meeting, which marked its 30th anniversary this year, was organized by the community of Sant’Egidio—a lay Catholic group headquartered in Rome—in collaboration with the Diocese of Assisi and the Franciscan Families. Tenrikyo was represented by six delegates including Director-in-Chief of Administrative Affairs Zensuke Nakata, Tenri University Vice President Ikuo Higashibaba, Europe Centre Head Yoshihisa Hasegawa, and Dai-Roma Mission Station Head Hideo Yamaguchi. The meeting featured a total of 29 panel sessions and two forums under the overarching theme of “Thirst for Peace.” Rev. Zensuke Nakata, who took part as one of the panelists, introduced the teachings of Tenrikyo and expressed his resolution to make the utmost effort to realize the Joyous Life World.

The meeting originally started in 1986, when the late Pope John Paul II invited religious leaders from across the world to gather in Assisi, a sacred place for Catholics. Each year after that, the Community of Sant’Egidio took the initiative to hold the meeting in a different city in Europe. Tenrikyo has been receiving invitations to attend the meeting since its participation in the 1986 event. Notably, the 2009 meeting in Krakow, Poland, was attended by the Shinbashira and his wife. Tenrikyo has been asked to offer behind-the-scenes help because local followers had developed a relationship of mutual trust with the community. This year, four followers were involved in this event as interpreters.

The meeting started with the opening assembly on the afternoon of September 18 at the Arts Center in the presence of Italian President Sergio Mattarella. Attended by 4,000 people, the opening assembly was simultaneously interpreted into seven languages including Arabic, English, Italian, and Russian.

After the welcome remarks delivered by the bishop of Assisi and others, Andrea Riccardi, a historian and founder of the Community of Sant’Egidio, took the podium. He said: “What is important is to appreciate each other’s values, instead of rejecting them. Dialogue links the world.” During the opening assembly, a rainbow appeared near the venue and was shown on the screen. Since a rainbow had also appeared on the day of the first peace meeting in 1986, participants reflected afresh on “the spirit of Assisi.”

On the afternoon of the 19th, Director-in-Chief of Administrative Affairs Zensuke Nakata served as a panelist in a session entitled “Asian Religions, Dialogue and Peace.” 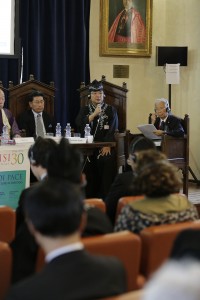 Rev. Nakata started off his speech by referring to the current turbulent state of the world and said, “At present, we find ourselves at a juncture where we must engage in serious self-reflection at a fundamental level.” He then explained the basic aspects of the teachings of Tenrikyo by stating that God the Parent is God of Origin, God in Truth, and that all human beings in this world are brothers and sisters. He also said that the goal of the existence of human beings is “to implement the Joyous Life in which we help one another in its true sense, thereby realizing the world of the Joyous Life that is brimming with joyousness.” Referring to the truth of “a thing lent, a thing borrowed,” he said, “Besides becoming aware of our body being a thing borrowed from God and having a sense of gratitude for being able to use our body as we desire, we need to discuss and understand well the appropriate use of mind one another.”

He went on to emphasize that Tenrikyo teaches that we should work for the salvation of others and explained the Service and the Sazuke, which are means of salvation. He then mentioned the importance of being aware of and grateful for God’s blessings that surround us.

Lastly he said, “The path that leads to the Joyous Life World begins with an effort to help save people around us,” and emphasized, “We are able to experience true happiness in this world only when we become aware of the truth that all people in the world are brothers and sisters, give priority to working for the salvation of others, and strive to live a life of faith with true sincerity.” After stating that our mission as religious leaders is to practice self-discipline, make a committed effort to realize the Joyous Life with people around us, and pray to God for the salvation of all people in the world, he concluded his speech by saying, “[W]e are determined to carry out salvation work in order to make steady progress along the path of single-hearted salvation that leads to the Joyous Life.”

In a question-and-answer session held after the speech, he was asked a question about an increasing number of people who are indifferent to religion. He answered: “Not only interreligious dialogue but dialogue with people who are uninterested in religion and their communities is of great importance. I hope different religions cooperate to address this issue.”

On the last day Rev. Nakata joined the other religious leaders at a luncheon with Pope Francis. On that evening, participating religious groups were allocated different venues to conduct their respective prayers for peace. The Tenrikyo delegation performed the seated service, the Eight Verses of the Yorozuyo, and Song One through Four of the Twelve Songs. 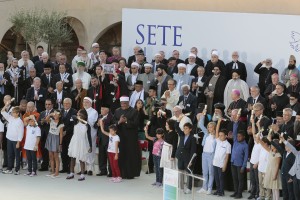 After the prayer, the final ceremony took place at the Lower Square of Saint Francis in the presence of Pope Francis. At the ceremony, leaders from participating religions were on the stage to light “candles for peace,” and the meeting came to a close.