On September 10, Congo Brazzaville Church in the Republic of the Congo conducted a service to mark its 50th anniversary as well as to commemorate the enshrinement of the medo (symbol of worship) in the presence of the Shinbashira, his wife, and Successor-Designate Daisuke Nakayama. 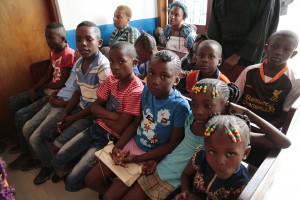 The commemorative service drew some 260 people from not only the Congolese capital, Brazzaville, but also the second largest city, Pointe-Noire, and the neighboring Democratic Republic of the Congo (formerly Zaire).

Shortly before the commemorative service began, the assembled followers’ joyous and cheerful chorus full of adoration for God the Parent and Oyasama resonated in and around the worship hall.

At 9:00 a.m., as the service started, the congregation paid their respects to God the Parent, Oyasama, and the Mitama-sama, clapping their hands in unison with the Shinbashira.

Congo Brazzaville Church Head Minister Pierre Bazebibaka began the proceedings by offering a service prayer in French, in which he expressed his joy at being able to celebrate the 50th anniversary of the church and his gratitude for God’s profound blessings and parental love.

Following the prayer, the Shinbashira took the podium to deliver his address. After referring to God the Parent’s providence and Oyasama’s Divine Model, the Shinbashira said: “It is vital in this regard to express our gratitude to our true Parent. This, I think, should not be forgotten.” He also said that we human beings—who are kept alive by God—should help one another in our lives as we work toward the Joyous Life.

He then explained, “A church is a place to develop our proficiency in practicing and savoring the Joyous Life.” He went on to say that if those of us who gather at the church straightforwardly implement the teachings in high spirits, our joyous living will become visible to those around us, thereby helping spread the Joyous Life in wider and wider circles.

Further, he asked the listeners to keep their minds connected with God the Parent and Oyasama by visiting the church on a regular basis. Also the Shinbashira requested them to proactively implement the teachings by performing the service and endeavoring to emulate Oyasama’s Divine Model with simple openness exactly as we are taught.

In concluding his address, the Shinbashira said, “I would also like you to work together to promote your church activities in unity of mind, so that the number of those who come to the church will increase more and more, thus enabling the church to fully function as a harmonious center for the Joyous Life.” 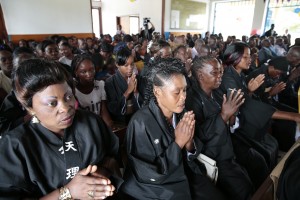 The seated service then took place with the Shinbashira as the core, followed by the performance of the Dance with Hand Movements, while the congregation inside and outside the worship hall joined in singing the Mikagura-uta, The Songs for the Service, in Japanese with bright and cheerful voices. A commemorative reception was then held in the garden located on the east side of the church building.

On that day, reporters from the state television and radio broadcasting company as well as three newspapers and a news agency visited the church to cover this event. 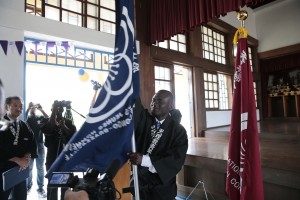 Congo Brazzaville Church now has chapters of all the three main associations as the Boys and Girls Association had previously been established at the time of the church’s 40th anniversary. The path in the Congo has reached a significant milestone and begun making powerful strides toward the Joyous Life World.