The Boys and Girls Association Celebrates its 50th Anniversary

On September 25, Tenrikyo Boys and Girls Association held a gathering to commemorate its 50th anniversary in the presence of the Shinbashira, his wife, and Successor-Designate Daisuke Nakayama. The gathering, which took place in the East Worship Hall of the Main Sanctuary, drew 2,172 people, including the Director-in-Chief of Religious Affairs, the Director-in-Chief of Administrative Affairs, staff members of the association headquarters, heads of directly supervised chapters and diocese chapters, and nurturing committee members of those chapters. 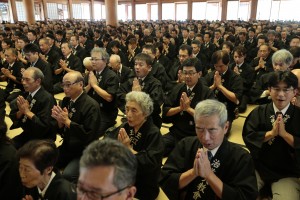 The gathering began at 1:00 p.m., when the congregation joined together to perform the service with the Shinbashira, who serves as the association’s president, as the core.

He then spoke about the goal of the association, saying: “Having completed the Oyasama 130th Anniversary Service, we are now all committed to putting more effort than ever before into nurturing successors of the path. . . . The Boys and Girls Association is entrusted with nurturing children who belong to the youngest generation of those successors. This association aims to teach children the way of thinking that is based on faith, yet we should not only tell them about it but provide them with care and guidance appropriate to their age so that they can internalize it. The goal of the association is to lay the foundation that helps children grow up to be fine Yoboku in these ways.”

He went on to say: “The primary duty of those involved in nurturing children is to guide them with an open mind and in such a way that they can unconsciously learn that the blessings of God the Parent are provided in their daily lives and that, as they become older, they will experience and come to appreciate the joy of walking the path. They will then be able to make an honest effort to implement the teachings in their lives.” He stressed the importance of proper care and support from adult leaders in helping association members (children between the ages of 0 and 15) to grow up to the point where they can live independently as successors of the path. “This is one of the fundamental reasons for the involvement of adult leaders in the association,” he said.

Pointing out that all adult followers of the path are this association’s adult leaders, the Shinbashira asked the congregation to fulfill their respective roles and work together to nurture children, thereby allowing this association to be blessed with steady growth. He also suggested that they nurture children in cheerful and bright spirits exemplified by the Divine Model while sharing their own childhood experiences so that they could gradually sprinkle the fragrance of the teachings on children, who might then develop an awareness of being successors of the path. He added, “Without getting caught up in immediate results, I would like you to engage in nurturing children from a long-range perspective.”

Having touched upon the second Shinbashira’s intention in founding the Boys and Girls Association, he concluded his address by saying, “Please continue to put your efforts into the association activities—as well as any other activities related to nurturing successors of the path in a broader sense—while keeping your minds united so that you can fulfill your responsibility of passing down the faith to the next generation.”