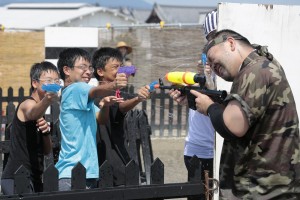 The Oyasama 130th Anniversary Childrenʼs Pilgrimage to Jiba was held between July 26 and August 5 under the theme “Spreading smiles! Help each other!” This year, in commemoration of the anniversary, the pilgrimage was lengthened by an additional day. During this 11-day period, a total of 280,426 children and staff members, including some 1,657 children and adult leaders from 29 overseas countries and regions, returned to the Home of the Parent.

During the Children’s Pilgrimage to Jiba, the high temperature in the Home of the Parent exceeded 30°C (86°F) every day. As a measure to maintain the health of participants and prevent heat stroke, first-aid stations with the full support of Ikoi-no-Ie Hospital were set up at 14 locations and staffed by nurses from this hospital as well as students from Tenri Health Care University.

The Childrenʼs Pilgrimage officially kicked off after the completion of the July Monthly Service on the 26th. Immediately afterward, large numbers of children began swarming to various attractions and educational and training activities, each of which was associated with one or another of the “three promises” for the Childrenʼs Pilgrimage to Jiba: (1) Savor the joy of living; (2) Take good care of things; and (3) Help one another.

As for the educational and training activities, the “Oyasato-yakata Lecture” and the “Service Practice Classroom” gave the children an opportunity to learn the teachings and practice the service dance and the musical instruments used in Tenrikyo services. Children could also participate in hinokishin activities at the Home of the Parent. Cheerful voices of children shouting “Ichi, ni, san, shi (One, two, three, four)” could be heard at the corridor-cleaning hinokishin site in the Sanctuary Corridor. At the venue for earth-carrying hinokishin—which is one of the original activities of the Children’s Pilgrimage—there were many children carrying earth in straw baskets suspended from 1.5-meter (5-ft.) wooden poles.

Organized for the childrenʼs entertainment were a variety of thrills and adventures such as the “Chopinʼs Miracle Adventures” and the “Ninja Village” as well as a musical production of a childrenʼs story and stage performances including a variety show featuring dance, music, comedy, and magic. Several swimming pools as well as a number of playgrounds equipped with a variety of entertaining gadgets and contraptions were also provided for the childrenʼs enjoyment. In addition, a variety of athletic competitions were held, such as the “Childrenʼs Olympics” and a martial arts competition for children. 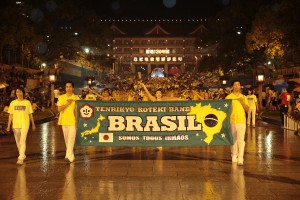 After the evening service on July 26, fireworks lit up the sky to mark the start of the Oyasato Parade—which is always one of the highlights of the childrenʼs stay in the Home of the Parent. Many brass bands and fife and drum bands as well as pilgrimage groups from some overseas countries and regions participated in it. Children seated on bleachers lining the parade route were drawn to the spectacular performances.

July 27 marked the first day of activities such as offertory gagaku and fife and drum performances and the “Morning Service.” At the “Morning Service” event at 8:00 a.m., great numbers of children filled the North, South, and East Worship Halls to attend the performance of the seated service led by the Shinbashira, who played the wooden clappers.

After the service, the Shinbashira gave a talk to the participants. He first referred to the official title of this year’s Children’s Pilgrimage that includes the expression “Oyasama 130th Anniversary.” He then clarified the differences between Oyasamaʼs anniversaries and those of our ancestors by saying that Oyasama did not pass away but withdrew from physical life. He continued: “The reason why we observe Oyasama’s anniversaries every ten years is to remember the intention behind Her withdrawal and to make a committed effort to bring Her joy. . . . Oyasama cannot be physically seen but She remains here in this Residence, always watching over us. Thanks to Her, we can live each day with a sense of security.” Walking around the worship halls, he asked the children: “When did you make your dad, mom, or friends happy recently? What exactly did you do to make them happy?” Their answers included “When I did some house chores” and “When I did some hinokishin for others.”

After listening to those children with a smile, the Shinbashira said: “When you do something that makes others happy, they are happy and you also have a good feeling. When both you and they are happy, that will be the source of the Joyous Life. And I am sure that God the Parent and Oyasama are also delighted to see that happen.” The Shinbashira then talked about the importance of the Boys and Girls Association Pledge. “We are taught three important points: namely, “be faithful to the teachings,” “devote [oneself] to hinokishin,” and “help others at all times. . . . You will see reminders of these points throughout the Children’s Pilgrimage sites. These three points are all part of the important teachings of Oyasama,” he said. He concluded his talk by saying: “What Oyasama wants to see us do is build the world of the Joyous Life by helping one another. In order to do that, we should implement what we are taught as straightforwardly as possible. I hope you will try to implement the teachings of Oyasama in your daily life, not just while you are here in Jiba, the Home of the Parent, but also after you go back to your home. Having made that request, I would like to conclude my talk this morning.”

The Children’s Pilgrimage to Jiba came to a close on August 5. In the Oyasato Parade that night, fife and drum bands were joined by Boys and Girls Hinokishin Corps members, nurses from Ikoi-no-Ie Hospital, students from Tenri Health Care University, and high school students and other staff members who had contributed their hinokishin during the Children’s Pilgrimage. The appearance of the marching band of Tenri Kyoko Gakuen High School marked the end of the Oyasato Parade and the beginning of the “Finale” held in front of the Main Sanctuary. Two representatives of the Boys and Girls Hinokishin Corps offered words of appreciation to the Shinbashira. Fifty members of the Boys and Girls Hinokishin Corps then presented the Shinbashira, his wife, and Successor-Designate Daisuke Nakayama with bouquets of flowers. This was followed by everyone singing this year’s theme song “Spreading smiles! Help each other!” Another round of fireworks brought the 11-day event to a close.

Following the morning service on August 6, the Shinbashira thanked the organizers and people who had engaged in hinokishin during the period. The Shinbashira then asked his listeners to incorporate their memories and experiences gained through their hard work into their daily life so that they can make continuous efforts to live up to God the Parent and Oyasamaʼs intention. 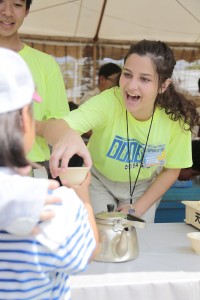 Pilgrims from overseas participating in the Childrenʼs Pilgrimage to Jiba made an invaluable contribution to the childrenʼs festival by adding an international flavor to it. According to the statistics compiled by the Overseas Department, the numbers of people from overseas who returned to Jiba during the period were: 182 from North America (U.S. mainland and Canada); 68 from Hawaii; 13 from Australia; 24 from Sri Lanka, 22 from Thailand, 13 from Laos, 11 from Nepal, 4 from the Philippines, 2 from Singapore, 1 from Indonesia, 1 from Vietnam; 342 from Taiwan, 339 from South Korea, 43 from Mongolia, 20 from Hong Kong, 6 from the Chinese mainland; 440 from Brazil, 35 from Colombia, 14 from Mexico, 9 from Peru, 7 from Argentina, 6 from Venezuela, 4 from Panama; 31 from France, 9 from the U.K., 4 from Italy, 3 from the Netherlands, 1 from Germany; 3 from Kenya. In honor of these pilgrims, a welcome-back party was given on July 28 in the Overseas Departmentʼs parking lot, providing a perfect opportunity for them to enjoy one anotherʼs company. 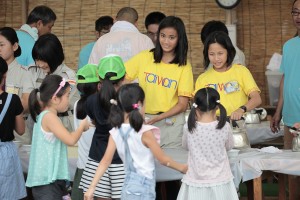 Among those who joined the Childrenʼs Pilgrimage from Hawaii were eight children who belong to the Hawaii Tenri Dojo. They participated in the martial arts competition and gained invaluable experience. Rev. Melvin Iwata, who is in charge of this group and the head minister of Honolulu-ko Church, said, “Iʼm really glad to be able to guide these children from the Hawaii Tenri Dojo to the Oyasama 130th Anniversary Childrenʼs Pilgrimage to Jiba. They must have experienced the atmosphere of the Home of the Parent and Japanese traditional Judo.”

As the blazing heat of midsummer sent children scurrying in search of refreshments, members of the Boys and Girls Hinokishin Corps served them ice-cold tea as one of the corpsʼ many hinokishin activities. This year, a total of 180 boys and girls from overseas countries and regions took part in the Hinokishin Corps between July 26 and 29.