As part of the 900th session of Shuyoka—the three-month Spiritual Development Course offered in the Home of the Parent—the English class, the Chinese class, and the Portuguese class were held from April 1 through June 27. In addition, the 901st session, which started on May 1 and ended on July 27, included the Thai class and the Spanish class. Those non-Japanese language classes drew a total of 94 students from 17 countries and regions.

Jozias Iran Zanelatto from Brazil attended the Portuguese class. He had quit his job when the church to which he belongs began repair work on its sanctuary in the first year of the pre-anniversary period leading up to the 130th Anniversary of Oyasama. Taking advantage of his skills as an architect, he participated in the construction. In the meantime, he applied to Shuyoka out of his desire to return to Jiba during the present season. 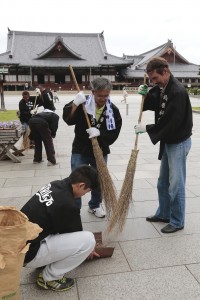 During Shuyoka, he visited the Main Sanctuary of Church Headquarters every day and engaged in hinokishin by pulling weeds in the Sanctuary precincts. “With an awareness of and confidence in being a Yoboku, I’ll work harder for the salvation of others after going back to my country,” he said.

Ming-yan Wu, a third-generation follower from Taiwan, attended the Chinese class. Two years ago, she was diagnosed with cervical cancer. Although she recovered enough to go about her daily life after receiving treatment, she lost sensation in the big toe on her left foot. During Shuyoka, many people administered the Sazuke to her at the school facilities and her followers dormitory. Then, one day in the second month, she found that she had regained sensation in the big toe that she had not been able to move for two years. Having received this miraculous blessing, she came to study the teachings with great joy and in high spirits. She said: “I believe that Oyasama guided me to Jiba during this season through my illness. I will continue to visit my church and pass down the faith to my children.”

Jimmy Do, a first-generation follower from the U.S., attended the English class. He came to know the path through his younger sister’s mother-in-law—who had listened sympathetically to him when he was having difficulties—and returned to Jiba for the Oyasama 130th Anniversary Service. Seeing people from various countries earnestly praying on that occasion, he became motivated to learn the teachings and applied to Shuyoka. In a discussion session during the second month, Jimmy opened up about what was troubling him, saying, “I often make cutting remarks to others.” Then, one of his classmates said, “I always try to think what Oyasama would do if She were in my position.” Jimmy realized that the problem was rooted in the way he was using his mind. Since then, he has kept a smile on his face. He said, “Even after going home, I will continue to be careful about how I use my mind so that I can offer a helping hand to those in need and sweep away the dust of my mind if only slightly.”

Chokchai Ekataksin, who attended the Thai class, had returned to Jiba 28 years ago for the first time, invited by his elder brother and the head minister of his church. He was then impressed by seeing people performing the service in the Main Sanctuary. After going back to his country, he had devoted his time to spreading the fragrance of the teachings during his work breaks and encouraged many people to attend the Besseki lectures. On the other hand, Chokchai often found it difficult to answer people’s questions about the teachings. Desiring to be able to convey the teachings more accurately, he decided to apply to Shuyoka. During Shuyoka, he read Tenrikyo books even out of classes. He said: “Now I can answer people’s questions with confidence. After completing Shuyoka, I’ll attend the Lay Minister Preparatory Course and learn more about the teachings. I’ll then try to bring as many Thai people as possible back to Jiba.”

Milka Mendez from Panama attended the Spanish class. She had heard about the teachings from a Japanese friend four years ago and, in the following year, returned to Jiba and received the truth of the Sazuke. This time, she applied to Shuyoka with a desire to learn Oyasama’s Divine Model. Through taking classes, she was especially impressed by Oyasama’s humble attitude. Milka said: “Before knowing the teachings, I easily got angry. I never recognized how I could be in the wrong when involved in a family quarrel, for instance. I now understand that I should keep my mind humble so that I can sweep away the dusts of the mind, which I have collected without realizing it.” Although Milka became a Yoboku three years ago, she had not administered the Sazuke until she came to Shuyoka. Through administering the Sazuke to her Shuyoka friends, who were suffering from illnesses, she found that the mind of saving others was growing inside her. “I’m savoring the joy of saving others. I’ll continue to administer the Sazuke to as many people as possible after going back to Panama,” she said.