On July 26, the July Monthly Service was conducted at the Main Sanctuary of Church Headquarters with the Shinbashira presiding as chief officiant.

In the Service prayer, the Shinbashira first expressed gratitude for the constant protection and guidance God provides out of single-hearted parental love for us. He went on to say that the Oyasama 130th Anniversary Children’s Pilgrimage to Jiba would be held between July 26 and August 5 under the theme “Spreading Smiles! Helping Each Other!” He went on to say: “We pray that as many children as possible who are looking forward to the summer event in Jiba will return here and learn to help each other while enjoying various attractions and events so that the Children’s Pilgrimage may be fruitful. Please provide Your protection to everyone involved in the event including those in nurturing positions and Your guidance to ensure that everything proceeds smoothly throughout the duration of the pilgrimage.”

The Kagura Service and the Dance with Hand Movements were then performed joyously. 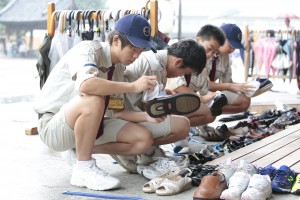 The rainy season ended in mid-July and hot sunny days lasted for a few days in the Home of the Parent until it rained on the morning of the 26th. During the Service performance, the rain let up and a cool breeze started blowing in the areas around the Sanctuary precincts where followers joined together in singing the songs for the Service with their minds in unison. The festive and vibrant atmosphere permeated the Sanctuary precincts as there were a great number of people including students and staff members wearing matching T-shirts, members of the Boys and Girls Hinokishin Corps dressed in their uniforms, and leaders and children of many pilgrimage groups, all of whom appeared excited as the Children’s Pilgrimage to Jiba was about to get underway.

Following the Service performance, Honbu-in Yoshiji Matsumura took the podium to deliver the sermon. He began by saying that, with the Oyasama 130th Anniversary Service having been observed in January, now is the season to make a committed effort to sprinkle the fragrance of the teachings and help save others so that we will be blessed with many new Yoboku who will strive to realize the Joyous Life World as soon as possible. He then asked, “How can we make further spiritual growth as Yoboku and what can we do to guide and nurture others into becoming true Yoboku?”

In order to help others settle Oyasama’s teachings in mind and make progress in their spiritual growth, it is important that we make full use of our mind, words, and actions, said Honbu-in Matsumura. He then said, “If we are to make progress along the path of single-hearted salvation, we must continue making a committed and sustained effort to convey the teachings to others.”

He stated that the Oyasama 130th Anniversary Children’s Pilgrimage to Jiba provides children with a great opportunity to return to Jiba and come into Oyasama’s presence to express their daily gratitude in this important year of Oyasama’s anniversary. He concluded his sermon by saying: “At the ‘Morning Service’ event during the Children’s Pilgrimage to Jiba, children recite the Boys and Girls Association Pledge to God the Parent and Oyasama as well as to the Shibashira. In order to prevent the pledge from becoming an empty promise, those of us in nurturing positions and roles bear a responsibility to demonstrate the teachings ourselves, explain the teachings concisely, and make a painstaking effort to help children understand the teachings. May I ask you to do all of these in providing guidance and nurture to future Yoboku.”