From July 18 to 24, Tenrikyo Young Men’s Association organized its 9th International Hinokishin Corps, which is designed for association members of overseas chapters. Held in the year of the 130th Anniversary of Oyasama, this year’s corps was comprised of a total of 283 members, the largest number of participants ever, from 15 countries and regions—namely Argentina, Brazil, Canada, Colombia, France, Hawaii, Mexico, Nepal, the Philippines, South Korea, Taiwan, Thailand, the U.K., the U.S. mainland, and Venezuela. Arakitoryo, pioneers of the path, from many parts of the world traveled across the oceans to assemble at Jiba, the Home of the Parent, where they sowed seeds of sincerity by engaging in various hinokishin activities.

The International Hinokishin Corps serves as a special corps of the Oyasato Construction Young Men’s Association Hinokishin Corps. It is designed to provide overseas members with an opportunity to sow seeds of sincerity at Jiba and interact with their fellow members from many parts of the world. Organized every three years, it was due to have been held last year. However, when the leaders of both the association headquarters and overseas chapters discussed the matter in an overseas chapter chairmen’s meeting, they agreed that it was desirable to form the corps in the year of Oyasama’s anniversary. After consulting with relevant departments of Church Headquarters, the association headquarters decided to postpone the formation of the corps for a year so that more members could join the corps.

On the 20th, after the morning service at Church Headquarters, the participants assembled at the Foundress’ Hall 3 to listen to the address by the Shinbashira. The Shinbashira began his address by explaining how the corps started. He then said to the participants: “I am sure that all of you had your own reasons and motivations for joining the International Hinokishin Corps. But it is only due to God the Parent’s intention to draw you to Jiba at this time that you have been able to return to the Home of the Parent. I would like you to make the best use of your time during the corps so as not to end up wasting the opportunity presented by the corps.”

The Shinbashira said that engaging in hinokishin in an unfamiliar environment makes it easier for participants to reflect on God the Parent’s intention embodied in the teaching of hinokishin. He concluded his address by saying, “I would like you to take advantage of this opportunity by giving thought to the meaning of hinokishin once again and making a sustained effort to internalize the spirit of hinokishin.”

Implementing the Joyous Life in daily life
For this year’s International Hinokishin Corps, the Brazil Chapter made a resolution to have 200 participants and asked the Mission Headquarters in Brazil and churches in Brazil to assist in calling for participation in the corps. In addition, the Brazil Chapter actively used social media in its efforts to encourage members to join the corps. As a result, this chapter was blessed with 172 participants, which was a record high for the chapter.

Brazil Chapter Chairman Leandro Hirotada Nozu, who is the successor-designate to the head minister of Curitiba Church, said: “Although we fell short of fulfilling our resolution for 200 participants, I believe that all of us members of the Brazil Chapter were able to put forth our utmost sincerity. Besides, I am just grateful for the opportunity to sow seeds of sincerity at Jiba together with fellow members of my chapter.” 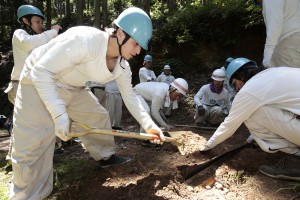 On the 18th, the opening ceremony was held at Moya 38, where participants stayed for the duration of the corps. Between the 19th and the 23rd, participants were divided into 14 groups and were assigned to carry out hinokishin tasks at various parts of Oyasato, the Home of the Parent, in preparation for the Oyasama 130th Anniversary Children’s Pilgrimage to Jiba. In addition, some groups were dispatched to Mount Jatani to engage in hinokishin tasks such as leveling the ground.

Anderson Kohatsu dos Santos, 29, is a Brazilian who belongs to Jussara Church. A few years ago, when he was beset by family troubles, he made a resolution to attend Brazil’s Shuyokai, a one-month spiritual development course, and Kyogi Koshukai, a five-day doctrinal seminar, both of which are held at the Mission Headquarters in Brazil. At this time, he returned to Jiba for the first time, attended the Besseki lectures, and became a Yoboku, besides joining the corps. He said: “Meeting many friends of the path inspired me to make further spiritual growth. When I return to Brazil, I will definitely share the joy of faith with my family and friends.” 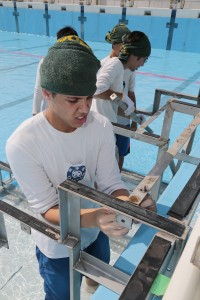 Po Wang is a 28-year-old American who takes Japanese classes offered at Tenri Cultural Institute of New York. He belongs to Meishin America Church and is in the process of attending the Besseki lectures. In June 2015, he received the blessing of salvation from asthma. This motivated him to participate in the activities organized by the America Chapter, and this year, he decided to participate in the International Hinokishin Corps. He said: “Prior to joining the corps, I had some anxiety. But with the help I received from many new friends I made in Jiba, I was able to spiritedly engage in hinokishin activities. I would like to continue learning more about the teachings and participating in various association activities.”

Among the participants from Spanish-speaking countries such as Colombia and Argentina was Eduardo Velasquez, 26, from Mexico, who is in the process of attending the Besseki lectures. Seven years ago, when he was doing some sightseeing in Nara City, he learned about the teachings for the first time. Since then, he has been visiting the Mission Center in Mexico. He said: “Together with participants from many parts of the world, I carried out various tasks with a sense of gratitude. In order to learn more about the teachings and deepen my joy of faith, I will apply to attend Tenrikyo Language Institute.”

On the morning of the 24th, the closing ceremony was held at Moya 38 where President Daisuke Nakayama delivered an address. After mentioning that the association will celebrate its 100th anniversary in 2018, he emphasized the importance of implementing the Joyous Life in the course of daily living. He then explained some important aspects of the anniversary-related activities. President Nakayama concluded the address by saying: “During this past week, I felt a strong reassurance that there are many Arakitoryo around the world with high energy and enthusiasm. I have great expectations for your activities in overseas countries, which will help to spread the absolutely true teaching to all parts of the world. I look forward to seeing all of you again.”