The 2016 Oyasato Seminar Draws 109 Students from around the World

The Oyasato Seminar, sponsored by Tenrikyo Overseas Department, was held once again this summer in Jiba. The Spanish Course, the Portuguese Course, and the Chinese Course, as well as English Courses I and III began on July 9 and finished on July 24. The Korean Course was held between August 3 and 15.

The seminar is an annual summer event originally launched in 1984 to help nurture successors of the path, mainly high-school-age students living in overseas countries, by providing an opportunity to gather in Jiba and learn and implement Oyasama’s teachings. This year’s seminar attracted a total of 109 students, which is the largest number ever, from 12 countries and regions: Brazil, Canada, Colombia, Germany, Hawaii, Indonesia, Mexico, Panama, South Korea, Taiwan, the U.S. mainland, and Venezuela.

At the opening ceremony, Overseas Department Head Zenkichi Tanaka delivered an address. After mentioning that each and every student was drawn to Jiba through the guidance of God the Parent and Oyasama, he said, “Let us work together to implement Oyasama’s teachings one by one, settle in our mind as many of the teachings as possible, and make them second nature to us.” Following the ceremony, participants and staff members performed a prayer service in the South Worship Hall.

In the first half of the program, students in English Course I as well as the Spanish, Portuguese, and Chinese courses attended lectures covering the basic teachings and practice sessions for the dance and the musical instruments for the service. Brandon Kota Irie, a 16-year-old English Course I student who belongs to Sacramento Church in the United States, commented after listening closely to a lecture on the eight dusts of the mind: “It was the first time that I seriously studied the eight dusts of the mind, and I reconfirmed the greatness of the teachings. During the rest of the seminar, I will proactively perform the service and engage in hinokishin so that I can reflect on my mind through the seminar.” 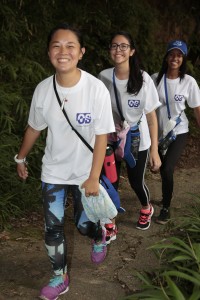 As the culmination of the first half of the program, students in the four courses crossed the Jusan Pass on the afternoon of July 15. In the muggy heat, students walked back to Jiba while encouraging one another. Shou-en Lo, a 17-year-old Chinese Course student, said, “I was uneasy about whether I could cross the pass because I had felt chest pain and had difficulties breathing since this past spring.” When a staff member administered the Sazuke to him three days before the event, however, he found that the pain ceased. He said: “Having received this miraculous blessing, I could complete the full distance without any trouble. Keeping in mind a sense of gratitude, I’ll try to sweep away the dusts of the mind so as to avoid illnesses and injuries.”

In the meantime, students of English Course III spent five days with members of the Precincts Section of Church Headquarters standing guard in 24-hour shifts and engaging in hinokishin activities on a day shift. Ayumi Marisa Meiling Wong, an 18-year-old student who belongs to N.C. Church in the United States, said: “At first, I thought the task of the Precincts Section was tough, but one of the staff members said to me: ‘We don’t consider it tough. We rather enjoy what we are doing.’ I learned the joy of helping others through their attitude of always welcoming people back to Jiba with a smile.”

In the second half of the seminar, students in the five courses left the Home of the Parent for their mission caravans; English Course III, English Course I, and the Portuguese Course went to Aichi, Ishikawa, and Okayama prefectures, respectively, and the Spanish Course and the Chinese Course went to Hyogo Prefecture. Students engaged in spreading the name of God, giving roadside speeches, and doing door-to-door missionary work with local missionaries. 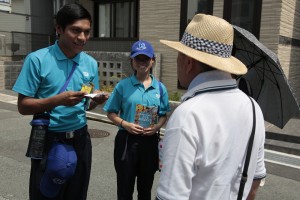 Michelle Moraes Rodrigues, a 19-year-old student from Brazil, had received the truth of the Sazuke right before the Oyasato Seminar began. On July 18, she administered the Sazuke for the first time to a man in his 70s, whom Michelle met while doing door-to-door missionary work with a missionary from Okayama Missionary House. She said: “I was nervous at first, but I calmly administered the Sazuke to the man after getting advice from the missionary. When I heard the man say, ‘Thank you,’ tears of joy welled up in my eyes. I now have confidence in praying for those who suffer from illnesses.”

On the 19th, students in the Spanish Course spread the name of God and gave roadside speeches in Kobe. Steve Yokibler Mendez, a 17-year-old student from Panama, passionately delivered his speech on the eight dusts of the mind to passers-by. “Through the seminar,” he said, “I realized the importance of saving others. After going back to my country, I will convey the teachings that I have learned in Jiba to my family members and friends.”