On January 28, Tenri University’s Oyasato Institute for the Study of Religion held a special symposium on Tenrikyo’s overseas mission in the university’s Faculty Building. This symposium was the last of a three-part series entitled “Current Situations and Challenges of Tenrikyo Overseas Mission”—the first and second symposia having been held in 2013 and 2014 respectively. This time, under the theme of “Tenrikyo’s Mission in Yet Unexplored Regions,” three people who have engaged in missionary work in different overseas regions spoke about their current and future efforts in their respective regions. 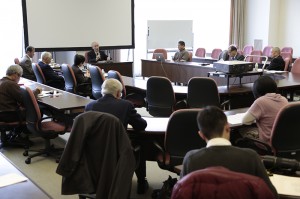 The first speaker was Mr. Masaru Soyama, former head minister of Rikumaki Branch Church, who has carried out missionary activities in Russia and Ukraine. He began his lecture by touching upon how he had started his missionary work in Russia. For example, he said that through interaction with many Russian sailors staying in Japan, he had gained some knowledge of the country. Also, he met people of different religious persuasions through his work as a prison chaplain, which he has continued for more than 30 years. These experiences inspired him to conduct missionary activities in Russia. He then said: “I watched Mikhail Gorbachev giving an address on the collapse of the Soviet Union on TV in 1991. My heart was then full of passion. I felt, ‘Now is the time to convey the teachings of Oyasama to the newly emerging Russia.’” He went on to talk about his activities and experiences in Russia, including his first visit to the country in 1992 and the work of giving lectures at prisons across the country—work that he had continued for about 20 years.

Mr. Soyama next spoke about his missionary activities in Ukraine. He said that, through his activities in the country, he realized Ukrainians were very respectful of acts of prayer. He recounted: “After giving lectures, I would ask if there was anyone suffering from illness and wishing to have the Sazuke administered. Then there were always some people lining up in front of me.”

As for future perspectives on his missionary activities in Russia and Ukraine, he said: “I’m currently focused on administering the Sazuke in such places as hospitals and welfare facilities rather than giving lectures. Although a severe crisis broke out between the two countries last year, the number of people who are interested in the teachings of the path is gradually increasing. I want to continue my efforts to spread the fragrance of the teachings in the former republics of the Soviet Union, including Russia.”