On February 26, Tenrikyo Church Headquarters conducted its Monthly Service in the Main Sanctuary with the Shinbashira presiding as chief officiant.

In the prayer, the Shinbashira first expressed his gratitude for the unchanging parental love and daily blessings of God the Parent, who constantly provides guidance and care to nurture human beings. He then stated: “In the year for completing our pre-anniversary activities leading up to Oyasama’s 130th Anniversary, the Service performers as well as church head ministers and Yoboku are determined to carry out salvation activities to live up to the meaning of the word ‘complete,’ thereby achieving the goals each of us has set no matter what it takes.” The Kagura Service and the Dance with Hand Movements were then performed joyously. 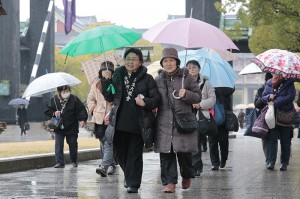 Rain clouds had covered the sky over the Home of the Parent since the morning of that day, and the weather was cold. However, the followers joined in singing the songs for the Service with their joyous minds in unison despite the drizzling cold rain. Following the Service performance, Honbu-in Seishi Kajimoto took the podium to deliver the sermon.

In an effort to clarify the significance of Oyasama’s anniversaries, Rev. Kajimoto started off by looking back on the course of events surrounding the lunar calendar date of January 26, 1887, when Oyasama withdrew from physical life. He stated that She withdrew from physical life out of Her parental love that single-heartedly desired to make it possible for us human beings, Her children, to perform the Service—which was taught as the path of universal salvation—without worry. Quoting a passage from a Divine Direction that says: “Sah, there was a thing I had intended to give to My children but I was not able. I shall bestow this truth on you step by step hereafter. Remember this well” (Osashizu, February 18, 1887), Rev. Kajimoto emphasized that God the Parent is hastening us to attain a level of spiritual growth that will allow us to help others be saved by administering the Sazuke—an effort that will lead to our true salvation as well. He then said that the way to bring joy to Oyasama in this anniversary season is to administer the Sazuke to people in our local communities and bring as many of them as possible back to Jiba, thereby responding to the parental love of Oyasama, who hastened world salvation by going to the extent of shortening Her term of life by 25 years.

He went on to speak about the importance of inquiring into the day of origin of our individual faith. Introducing the efforts of our predecessors who devoted themselves to single-hearted salvation toward the 10th Anniversary of Oyasama, he encouraged the congregation to emulate our predecessors’ faith and fervently follow in their footsteps while setting our sights on the 130th Anniversary of Oyasama. He said that the important thing is to take Her anniversary as an opportunity to make progress in our spiritual growth and take a step toward the realization of the Joyous Life World.

Toward the end of his sermon, Rev. Kajimoto said that the way we should spend the “three years, one thousand days” pre-anniversary season is clearly stated in Instruction Three, which urges us to implement salvation work. Referring to a passage from the Shinbashira’s sermon at the Spring Grand Service, he reaffirmed the message from the Shinbashira, who encouraged all Yoboku to heighten their awareness of their mission and engage in salvation work as much as possible. He closed his sermon by calling upon the listeners to become spirited and fulfill their respective roles and responsibilities in this year for completing the pre-anniversary activities.