When the registration desks opened at 8:30 a.m., groups of association members carrying their chapter flags began to file into the Sanctuary precincts one after another and fill 5,000 benches set up in the Inner Courtyard. Although thick clouds had been covering the sky overnight, sunlight broke through the clouds right before the convention began.

At 10:00 a.m., Successor-Designate Daisuke Nakayama, who was inaugurated as the association’s new president on August 25, escorted the Shinbashira, his wife, and other guests into the Inner Courtyard. A moment of worship was followed by the hoisting of the association flag, the opening declaration, and the singing of the Eight Verses of the Yorozuyo. The progress report on the activities of the previous year was subsequently presented by Association Vice Chairman Masanori Shimamura.

Association President Daisuke Nakayama then took the podium to deliver his address. Touching upon his inauguration as the association’s fifth president, he said: “Having become aware of the weightiness of the responsibilities that come with the new position, I feel tense with expectation. I am aware of my shortcomings and lack of experience; however, I am determined to do my utmost to fulfill my duties. May I ask all of you association members for your support and cooperation?”

Moreover, he said: “Through engaging in missionary work myself, I have come to realize that the more actions I take, the deeper appreciation I feel for the workings of God the Parent and Oyasama. . . . [W]e should give priority to implementing the teachings during this pre-anniversary season. Instead of ruminating over the possibilities of what might happen, you can exhibit the characteristics befitting Arakitoryo by taking action first and foremost.” He went on to ask association members to become united as one and engage in missionary work ever more vigorously, saying, “To the members who have yet to carry out the tasks of the season, I would like you to take your first concrete step in doing missionary work, and as for those who have been proactively carrying out the tasks of the path, I would like you to accelerate your progress in the pre-anniversary activities.” He further encouraged all members to make resolute efforts to accomplish the goals that each directly supervised chapter has set and give full expression to the qualities befitting Arakitoryo, thereby promoting the pre-anniversary activities. “I believe that God the Parent has such expectations for the Young Men’s Association,” he said.

He then concluded his address by saying, “During the lead-up to the 130th Anniversary of Oyasama, let us association members take powerful strides in sprinkling the fragrance of the teachings and working for the salvation of others in a manner befitting Arakitoryo, pioneers of the path, and carry out these tasks in high spirits, thereby building momentum for salvation!”

Following the president’s address, the Shinbashira, who is the association’s former president, took the podium. He began his address by expressing his appreciation to the successive chairmen of the Young Men’s Association, staff members of the association headquarters, and all the members for their support during the 34 years of his presidency. He went on to say: “[T]he new president is still young and inexperienced. He may not be able to fulfill his responsibilities as president without your help and support. I humbly ask you to continue to give him your kind support as ever before.”

The Shinbashira then moved on to speak about the proper frame of mind the Young Men’s Association members should be in to prepare for the anniversary of Oyasama. He said: “In two months’ time, we will be in the final year of the ‘three years, one thousand days’ season, which we set aside to make special efforts in preparation for Oyasama’s anniversary. To realize the goal of building ‘momentum for salvation,’ I hope all of you members are proactively sprinkling the fragrance of the teachings and engaging in salvation work, taking these tasks as your own concern, so that you can give full expression to the qualities befitting Arakitoryo, pioneers of the path.”

He went on to say: “All of you association members, who are Arakitoryo, pioneers of the path, are now following in the footsteps of the numerous predecessors who went ahead of you in following the path of single-hearted salvation. In order to go further, I hope you will strive to grow spiritually and engage in the construction of the mind. Moreover, you should try to sprinkle the fragrance of the teachings and help others be saved in a more proactive manner than anyone else. . . . You should take it upon yourselves to be a driving force in the pre-anniversary activities and fulfill your mission as Arakitoryo, which is to blaze a trail in yet unexplored regions. At the chapter level, I hope you will strive to achieve the concrete goals you have set for your chapter.”

As for the Oyasato Construction Young Men’s Association Hinokishin Corps, which marked its 60th anniversary this year, the Shinbashira highlighted its purpose by saying: “[O]ur focus is on the spiritual construction that precedes the material construction. What is important for us in carrying out the construction, therefore, is to near Oyasama’s mind and thereby strive to bring ourselves into accord with Her intention.”

Then, Association Headquarters Chairman Masanao Nakayama made a pledge on behalf of all association members. Following the pledge, a commendation ceremony took place in commemoration of the 60th anniversary of the Oyasato Construction Young Men’s Assocation Hinokishin Corps, recognizing the efforts of those directly supervised chapters that had fulfilled their resolutions for the number of participants in the Hinokishin Corps every year without fail during the last decade. 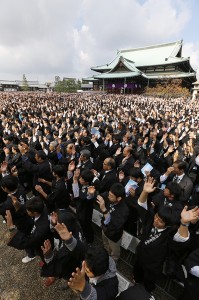 To bring the convention to a close, all members recited the “Guiding Principles of Arakitoryo” and joined together in singing the “Tenrikyo Young Men’s Association Song” and the “Oyasama 130th Anniversary Song.” After the conclusion of the convention, they also gave the association’s new president three cheers of banzai with joy in their hearts.