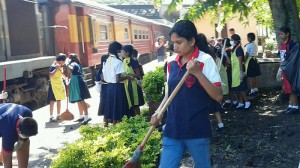 As a result of missionary efforts that Tenrikyo followers have made in Sri Lanka, hinokishin has become part of school activities at Royal International School in Kurunegala, the capital city of the North Western Province. Established in 1991, the school has produced many graduates who work in government offices. With a current enrollment of about 1,800 students in elementary school through high school, the school started its cleaning hinokishin in the local community as a school event four years ago. In July this year, a group of students from the school participated in the Children’s Pilgrimage to Jiba.

Known as the biggest tea exporter in the world, Sri Lanka is an island country in the northern Indian Ocean with 20 million people. The country has a variety of cultures and religions including Buddhism, Hinduism, Islam, and Christianity.

Seven years ago, several young followers affiliated with Honshiba Grand Church started missionary work in the country. In the midst of the civil war that was still going on at the time, they visited schools and welfare facilities around the country to sprinkle the fragrance of the teachings and help people be saved. Hiroyuki Hirakawa, 40, an original member of the mission group, said: “In Sri Lanka, quite a few people feel hesitant to do such voluntary work as picking up trash in public space for cultural reasons. I had to explain the meaning and significance of hinokishin to local people in an easy-to-understand fashion time and again.”

In 2010, Sandra Wanduragala, the school’s managing director, who came to support the spirit of hinokishin, led the school to begin occasional cleaning activities at train stations and other places. Their activities were reported on the nation’s major media. “I was taken aback by the teaching of hinokishin at first,” said Mrs. Wanduragala, continuing: “But I had a feeling that it would definitely have a positive impact on the children as well as our society. That’s why we decided to put it in our school curriculum.”

Social infrastructure including the water and sewerage system is not available in some parts of the area around the school. From the outset of the activities, therefore, the school was criticized by the children’s parents saying, “What if our kids get hurt and infected during the cleaning?” The activities even came to a halt.

This May, however, the school was able to resume the activities after obtaining consent from the parents on the condition that the school ensure that children wear gloves and surgical masks while cleaning.

The school’s group that joined the Children’s Pilgrimage to Jiba in July consisted of 33 people including students and Mrs. Wanduragala. They stayed in the Home of the Parent for six days during which they engaged in corridor-cleaning hinokishin and earth-carrying hinokishin. Mrs. Wanduragala said: “During our stay, we learned that hinokishin is not just about cleaning. Everything people did for us in Tenri with warm hospitality is also hinokishin. Their compassion and dedication to others is what we want our children to emulate. We’d like to increase hinokishin-related activities in our school curriculum.”

After the trip, she wrote on the school blog about Tenrikyo, the significance of hinokishin, and how the school came to include hinokishin as one of the school’s activities. Now hinokishin is an occasional extracurricular activity, but the school is working toward making it part of the daily curriculum.

Mr. Hirakawa said: “Besides Royal International School, there are a few other schools that agree to the spirit of hinokishin and show an interest in the Children’s Pilgrimage to Jiba. In an effort to spread the teachings more widely and deeply than ever, I want to continue to put my energy into sprinkling the fragrance of the teachings and helping people be saved in Sri Lanka.”