On October 26, the Autumn Grand Service for the 177th year of the Teaching was performed in the Main Sanctuary with the Shinbashira presiding as chief officiant. Approximately 87,000 Yoboku and followers from both within and outside Japan attended the Service. Taking the words of the Shinbashira to heart, the congregation renewed their pledge to make strong progress on the path of single-hearted salvation with a year and three months remaining before the 130th Anniversary of Oyasama. 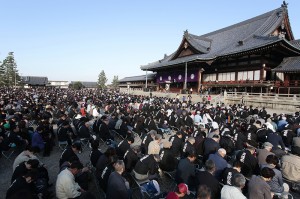 The Service began at 8:00 a.m., the hour at which Oyasama was settled as the Shrine of Tsukihi. The Shinbashira left the Staff Quarters with other Service performers for the Foundress’ Sanctuary and the Memorial Hall to pay their respects before proceeding to the Main Sanctuary.

The Shinbashira began the Service prayer by expressing gratitude for God’s guidance and blessings given from the founding of the Teaching through the present day and went on to say, “On this auspicious day today, we Service performers as well as church head ministers and other Yoboku will ponder deeply over the significance of the Teaching’s day of origin once again to help us follow the path of the Divine Model and dedicate ourselves to the tasks of single-hearted salvation with the expectation of making further spiritual growth.” He also said: “Prior to embarking on the upcoming final year of the ‘three years, one thousand days’ season we set aside for carrying out pre-anniversary activities, ‘Visits by Church Headquarters Officials’ will be conducted from early November to the end of December this year. With church head ministers at the forefront, all Yoboku will engage in the pre-anniversary activities with an unwavering commitment to fulfill their resolutions and goals, strive to further promote the implementation of salvation work—the main focus of the pre-anniversary activities—and carry out the tasks of the path in unity of mind.”

The Kagura Service and the Dance with Hand Movements were then joyously performed. Blessed with splendid autumn weather, the worshipers, who had filled the four worship halls, the Corridor, and other areas in the Sanctuary precincts, joined together in singing the Mikagura-uta, the Songs for the Service, with their minds in unison.

Tetsuyuki Hirose, 70, participated with his wife in their church’s pilgrimage group. Last February, Tetsuyuki’s mother suffered a stroke and was hospitalized. A prayer service for her was immediately performed at the church. Wishing for the blessing of her recovery, Tetsuyuki resolved to visit the church every day and administer the Sazuke to her. Shortly afterward, she recovered and left the hospital without any of the after-effects that often occur. Tetsuyuki said: “I realize that the anniversaries of Oyasama are seasons for saving others and also for being saved. I will continue to visit the church and administer the Sazuke while maintaining a sense of gratitude.”

Daisuke Matsumori, 26, who currently engages in missionary work in Okayama City away from his church and home, returned to Jiba, bringing a woman in her 70s. Last year, he met this woman, who was suffering from a backache and irregular heartbeat. Guided by Daisuke, the woman attended her first Besseki lecture last October and has returned to Jiba almost every month since then. “Every time I listened to the Besseki lecture, the pain in my body was relieved,” she said. Taking advantage of this occasion to return to Jiba for the Autumn Grand Service, she finally received the truth of the Sazuke. Daisuke said: “What makes me the happiest is that we can now work together as Oyasama’s instruments. I will continue to proactively reach out to people around me so that I can help guide as many people as possible to the teachings of Oyasama.”

A total of 749 followers from 22 overseas countries and regions returned to Jiba (as far as the Overseas Department is aware). Among them was Regina Katsumi Motoyama, 39, from Brazil. She is a second-generation follower and became increasingly aware of the truth of Jiba as her faith deepened. Facing the worsening condition of her mother, who has been afflicted with rheumatism and pneumonia for more than 10 years, Regina decided to return to Jiba for the first time with her two younger sisters. “Through our mother’s illness, I believe that God the Parent is encouraging us, her children, to make progress in our spiritual growth. Since I was able to receive the truth of the Sazuke during my stay in Jiba this time, I want to administer the Sazuke to her right after going home,” she said. 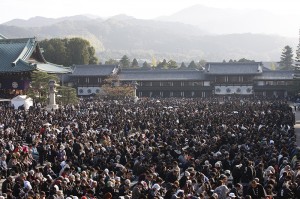 After the conclusion of the Dance with Hand Movements, the Shinbashira took the podium to deliver the sermon. He began by mentioning that all the activities and elements of the path should be in accordance with the ultimate goal of saving all humankind and realizing the world of the Joyous Life. He then spoke on the mission of Tenrikyo churches, which are facilities for the path of single-hearted salvation in various countries and communities. He laid stress on performing the service and spreading the teachings by referring to these tasks as “the two wheels of a cart.” He said, “When head ministers, other Yoboku, and indeed all followers belonging to their churches strive to fulfill the essential mission of a Tenrikyo church—namely, sprinkling the fragrance of the teachings and helping save others, as well as performing the service in unity of mind—it becomes possible to be blessed with having the churches serve as models of the Joyous Life in their local communities and as vibrant and joyous training centers for salvation, where many people come together.”

He next talked about the first Shinbashira, Shinnosuke Nakayama, noting that this year marks the 100th anniversary of his passing. After Oyasama withdrew from physical life, the first Shinbashira made strenuous efforts to lay the framework for Tenrikyo as a religious organization; for example, he established Church Headquarters, obtained sectarian independence from Shinto Headquarters, and accomplished the Taisho Construction, referring to the construction of the Main Sanctuary, which consisted mainly of what is now the North Worship Hall.

The Shinbashira also pointed out that the 30th Anniversary of Oyasama, which was held about a year after the first Shinbashira passed away for rebirth, was the first one that involved pre-anniversary activities at the level of the entire Tenrikyo community. After the plans for building the Main Sanctuary were provided through the Divine Directions in preparation for that anniversary, early followers made every possible effort to spread the teachings and help save others without letting up even to take off their shoes. He described their effort as an exemplary model for later generations to carry out pre-anniversary activities, saying, “The crucial part is to make progress in spiritual construction through material construction.”

He went on to say, “Thanks to the tremendous efforts of our predecessors, we are now blessed with such facilities as the Main Sanctuary that comprises all the four worship halls; we may say that Tenrikyo’s material construction has already made considerable progress.” He then asked the congregation to make full use of those facilities so that spiritual construction, which is also referred to as “endless construction,” would not stall. 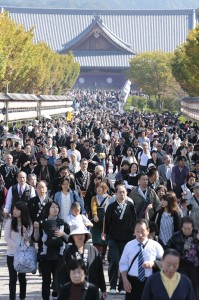 In conclusion, the Shinbashira stated that he has been asking all Yoboku to make a decisive effort to work for the salvation of others since announcing Instruction Three. He stressed the message once again by saying, “I hope that all Yoboku without exception engage in salvation work by doing whatever they can and especially what only they can do.” Pointing out that the remaining year and three months leading up to the 130th Anniversary would be crucial for the anniversary-related activities, he encouraged the congregation to make every possible effort to carry out salvation work in unity of mind so that they could show Oyasama a new level of spiritual growth and the fruits of their pre-anniversary activities on the day of the anniversary as a result of their decisive efforts.