Home News Tenrikyo Nioigake Day 2014: Fragrance of the Teachings Sprinkled around the Country

Tenrikyo Nioigake Day 2014: Fragrance of the Teachings Sprinkled around the Country

This year’s Tenrikyo Nioigake Day was observed between September 28 and 30, wrapping up the month that the Tenrikyo community annually designates as the month to emphasize and promote nioigake, or sprinkling the fragrance of the teachings. This three-day period is designed to get all Yoboku to actively engage in missionary work. The first day of the period is also designated as the day for church head ministers to give roadside speeches. What follows is the Tenri Jiho newspaper’s report on two districts’ activities that aim to increase followers’ involvement in salvation work. 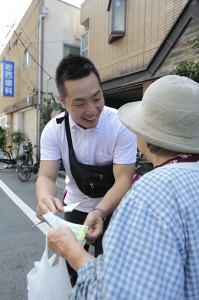 In the Ikuno-kita District of the Osaka Diocese, about ninety Yoboku and followers participated in missionary activities on the 28th. Prior to the “three years, one thousand days” period leading up to the 130th Anniversary of Oyasama, followers in the Osaka Diocese launched grassroots efforts to connect more and more Yoboku in the vicinity to the local Tenrikyo community. In the district, for example, groups of followers have proactively made visits to Yoboku families on a regular basis so that they have opportunities to meet one another in person. As a result of their efforts, increasing numbers of followers are participating in subdistricts’ monthly gatherings. In the lead-up to the Nioigake Day, local followers encouraged one another to join the event.

At 1:30 p.m. on the 28th, thirty-four followers started their missionary work around Shoto Branch Church. They spread the name of God by singing the Mikagura-uta, the Songs for the Service, while walking down the streets. At a busy area on the north side of Kintetsu Fuse Station, church head ministers gave roadside speeches, and other followers handed out pamphlets to passers-by.

One of the participants, Satoru Fujita, 56, said: “I got spirited by the Yoboku Gathering and began to proactively engage in missionary work. I’d like to make progress in the journey of spiritual growth so that the people I have tried to help will be saved.”

Rev. Shinji Nakao, the head of the district, said: “As we work hand in hand, missionary efforts are gaining momentum constantly. In the second half of the pre-anniversary period, we want to accelerate our efforts in salvation work in our community.”

In the Seisun District of the Shizuoka Diocese, thirty followers including church head ministers conducted missionary work in front of JR Yaizu Station on the 28th. Prior to the event, the district organized its efforts to encourage more and more followers to be part of the district’s activities. After the Yoboku Gatherings, which were held at six venues in the district with the participation of about 1,000 people, the district tried to have as many followers as possible participate in local activities by, for example, sending out invitation letters. 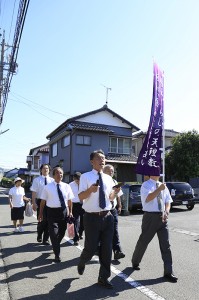 In late August, the Spiritual Development Seminar for Yoboku was held in the district, attracting eighty-four people, which was a significant increase from last year’s number. The participants raised an awareness of missionary work through the seminar, which was themed “Let’s do nioigake.”

On September 4, the Shizuoka Diocese held the Nioigake Day Pep Rally for those in leading positions in the diocese, whereby they pledged to work in unison for the Nioigake Day.

Shinji Suzuki, a 63-year-old follower, commented after missionary work on the 28th: “The Spiritual Development Seminar for Yoboku inspired me to do salvation work. Last month, I started to visit my boss, who is sick, in order to help him be saved. Today’s missionary work with my fellow followers made me more spirited than ever.” District Head Naohisa Iwamoto, the head minister of Kindo Branch Church, said, “In the hope that local followers get inspired by one another and get involved in salvation work on an individual level, we’d like to continue to support them by organizing local activities.”