Tenrikyo Church Headquarters conducted the September Monthly Service on the 26th at the Main Sanctuary with the Shinbashira presiding as chief officiant. After expressing his gratitude for God’s daily blessings and protection, the Shinbashira said in the Service prayer: “Having entered the latter half of the pre-anniversary period, we Service performers, church head ministers, and other Yoboku ought to increase our efforts in salvation work. Bearing in mind the significance of the mission entrusted to each of us, we are determined to make efforts to accomplish our resolutions by further devoting ourselves to sprinkling the fragrance of the teachings and helping others be saved as well as to continuously providing them with care and guidance.” Regarding the Nioigake Day to be observed at the end of the month, the Shinbashira said, “All Yoboku will spiritedly engage in missionary activities to convey Your intention to more and more people.” 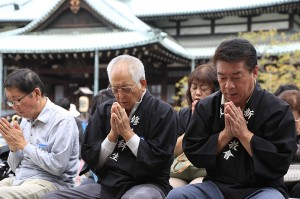 The prayer was followed by the joyous performance of the Kagura Service and the Dance with Hand Movements. The worshipers joined together in singing the Mikagura-uta, the Songs for the Service, with their minds in unison.

After the Service performance, Honbu-in Tokuo Hamada took the podium to deliver the sermon. He began by touching upon the “Oyasama 130th Anniversary Yoboku Gatherings,” which ended in June. He said, “All of us Yoboku have to maintain a full awareness of our mission as Oyasama’s instruments and go back to the basics.”

Rev. Hamada went on to talk about missionary work in South Korea, where he serves as the bishop of the mission headquarters. Referring to the fact that, among all the Japanese religions, Tenrikyo was the only one that survived in the post-war period, he said that the reason for that was that local followers themselves maintained their faith and that this was because in the previous period, Japanese missionaries had worked at a grassroots level, living with local people to sprinkle the fragrance of the teachings and help them be saved. He introduced some research conducted by religious studies scholars and stories of local missionaries who carried on the work of spreading the teachings.

After stating that the path in South Korea served as a test case for the overseas mission, he stressed: “Those days are over. Now we are in a time where our true value and strength are being tested. . . . We are blessed to have the translated Scriptures and a remarkable property that serves as the mission headquarters. But the question is whether our mind deserves such a great blessing.”

Quoting from the Scriptures and the Shinbashira’s words, he said, “We have to firmly settle the fundamental teachings in our mind and conduct missionary activities that are in accord with the truth of heaven and the truth of Jiba widely in the world.”

Rev. Hamada said, “We have to walk the path to spiritual maturity by sweeping away the dust of the mind to cleanse our heart and engaging in missionary activities and salvation work so that we can bring joy to God the Parent and Oyasama.” He also emphasized the importance of making decisive efforts in  salvation work for the rest of the pre-anniversary period.

He concluded by referring to the Autumn Memorial Service to be conducted the next day as well as the Nioigake Day. “Let us honor the virtue of our predecessors. Let us also carry out missionary activities and salvation work spiritedly in order to spread the teachings from our family to our community and from Japan to the world,” he said.