This year’s Tenrikyo Hinokishin Day was observed at 1,500 locations throughout Japan on April 29, which is a national holiday called “Greenery Day,” as well as at scores of locations in overseas countries, mostly on weekends in April and May. While hinokishin refers to daily actions that express one’s gratitude for the gift of life and one’s joy at being alive, this annual event is intended to provide people living in the same community with a special opportunity to combine their efforts in an outpouring of joy, thus enabling them to strengthen their mutual ties and make a contribution to their local communities at the same time. 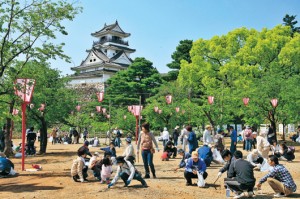 In the Philippines, 35 people in Santa Rosa City cleaned the shores of Laguna de Bay, the largest lake in the country, on April 18, and 92 people in Quezon City, located in Metro Manila, pulled weeds in Quezon Memorial Circle on May 9. On May 2, 79 people in Singapore cleaned East Coast Park, and 32 people in Thailand cleaned a park in Maha Sarakham. In Kolkata, India, 22 people pulled weeds in the grounds of Calcutta Church also on May 2. 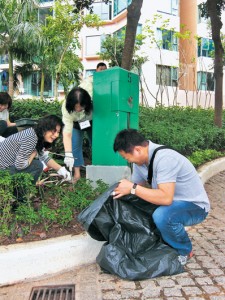 In Hong Kong, 42 people pulled weeds at Ma On Shan Country Park on May 1. On the same day, 99 people cleaned the areas around the Mission Headquarters in Taiwan. Also in Taiwan, a total of 83 people showed up at five venues including Chung Cheng Park in Chilung City for hinokishin activities organized between April 24 and May 2. In South Korea, 150 people in Gyeongnam Diocese engaged in various cleaning activities in Jinhae City on May 9.

In the United States, 82 people cleaned the areas around New York Center in Flushing on May 2, and 22 people participated in the center’s annual blood donation hinokishin at a local hospital later on that day. In Hawaii, 175 people on Oahu Island, in matching T-shirts, cleaned Honolulu Zoo on May 1, and nine people on Kauai Island cleaned a Japanese cemetery in Kapaa on the same day. On the Big Island, seven people in Kona cleaned Kona Memorial Park on May 2, and four people in Kohala cleaned Old Airport Park on May 9.

In Argentina, 30 people gathered at Buenos Aires Church on April 24 to clean yards and buildings within the church grounds. In Colombia, 17 participants in Cali cleaned the Pance River, which is about a 15-minute drive from the Mission Center in Colombia, on April 25, while 17 followers in Yguazú, Paraguay, cleaned a local sports field on the same day. In Venezuela, nine people cleaned a nursing home on May 1.

In the United Kingdom, 19 people picked up litter in London’s Hyde Park on April 25. In France, five people cleaned a street and square near the Tenrikyo fellowship in Lyon on May 2. 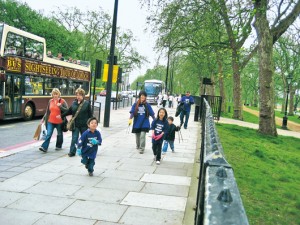 In the Republic of the Congo, 82 people cleaned streets in the city of Brazzaville on April 24, and in Garissa, Kenya, five people cleaned a children’s home on May 2.