On April 19, the Women’s Association held its 92nd annual convention commemorating the 100th anniversary of its founding, with the Inner Courtyard of Church Headquarters serving as the main venue. The convention drew some 120,000 members, which is the highest-ever number of participants attending the association’s convention. The convention came as the culmination of the association’s three-year endeavor to implement anniversary-related commitments. All chapters and districts had combined their efforts through special focus activities such as the 100th Anniversary Seminar for Branch Chapter Chairwomen, which was organized at each directly supervised chapter in 2008, and the 100th Anniversary Pep Rally for Women’s Association Members, which was held at a total of 375 venues in 2009. 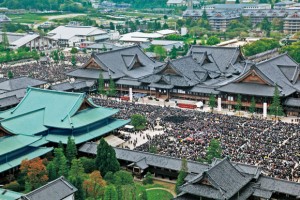 The registration for the convention began at 8:00 a.m. when fireworks were set off into the sky of the Home of the Parent. Members headed toward Church Headquarters, following their group leaders who held up crimson-red banners showing their chapter or church names. Handed out to participants as anniversary gifts at a total of eight registration desks set up around the perimeter of the precincts were the 100th Anniversary Commemorative Issue of Michi no Dai: Foundation of the Path magazine, which summarizes the 100-year-long history of the association, and a fabric bag designed to hold the Ofudesaki, as well as a pamphlet explaining the schedule of the convention. 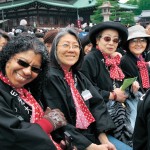 Engaging in hinokishin by helping members with registration and ushering them as well as providing assistance at first-aid stations were a total of about 1,000 members, including those from all parts of the country as well as students studying at Tenri High School and Tenri Kyoko Gakuen High School. Large screens were installed in front of the East and South Worship Halls as well as in open spaces on the north and south side of Foundress’ Hall 3 while loudspeakers were set up in Dining Hall 2, Foundress’ Hall 3, and the west basement entrance of the Main Sanctuary. For overseas followers, simultaneous interpretation was provided in 12 languages at the convention, with a total of 1,955 wireless receivers lent out. 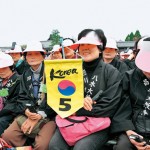 At 10:00 a.m., Women’s Association President Harue Nakayama escorted the Shinbashira, the former Shinbashira, and other guests into the venue. The proceedings began with the singing by all present of the Eight Verses of the Yorozuyo, followed by the new members’ pledge delivered by their representative, Kyoko Gakuen High School Student Makoto Nishi. Then Committee Member Shigeko Tanaka presented her report on the activities of the association for the past three years.

President Nakayama then stepped up to the podium. She started off by referring to the Divine Direction delivered on March 25, 1898, in connection with the founding of the Women’s Association. She then spoke on the founding of the association in 1910 as well as its subsequent development while sharing her thoughts on the great efforts of the members who dedicated themselves to the association’s activities over the 100 years. She then said, “Following in their footsteps, we spent the years leading up to this significant juncture of our association’s 100th anniversary by seeking to return to the origin and bring our association into accord with the way it was intended to be.” She then reminded the members that the association had promoted the slogan “Let each of us, by God’s blessing, have one person attend the Besseki lecture” so as to help others around them understand what constitutes genuine womanliness and the roles of women, and she encouraged members who had not achieved the goal to continue making efforts toward it. 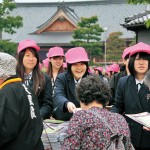 Further, President Nakayama stressed that members have no choice but to make a daily effort to build the sort of virtue that will enable them to receive God’s blessings and workings. After quoting a passage from the Shinbashira’s sermon delivered at this year’s Spring Grand Service, she said, “We are told that, in order to perform the service in a way that is acceptable to God, those of us who have faith in this path need to make a sustained effort to live our daily lives in accord with God’s intention and maintain our unity of mind.” She concluded her address by saying, “I would like all of us to pledge together that we will keep the momentum we have built up and take a powerful new step so that we will be able to make sprinkling the fragrance of the teachings and engaging in salvation work a daily practice in our lives of faith.”

The Shinbashira then took the podium to deliver his address. He started off by referring to a series of Divine Directions delivered in March 1898 and revisited God the Parent’s intention behind the founding of the association: “Back in those days, when society as a whole was very much male-dominated and women generally, therefore, had very few opportunities to come to the fore, Oyasama was saying, ‘I make no discrimination between men and women’ (Osashizu, March 26, 1898). Oyasama was instructing women to study the Divine Model and the teachings and proactively come to the fore to play more active roles.”

He then moved on to talk about the characteristics and roles distinctive to women by referring to the Truth of Origin. He also urged members to awaken to the heart behind Oyasama’s actions and settle their minds to accord with God the Parent’s intention in their efforts to serve as the foundation of the path. He concluded his address by saying, “I would like to [request] that you take advantage of this important juncture represented by the 100th anniversary to reflect anew on the day of origin of your association, take to heart the divine intention underlying its founding, and embark on a new journey with a fresh mind and in a reliable manner that is appropriate for the foundation of the path.” 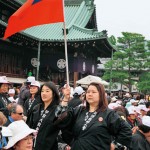 Taiwan Chapter Chairwoman Yasue Mihama then delivered a pledge on behalf of all members. To conclude the proceedings, members sang the association song and expressed gratitude to the Shinbashira and the former Shinbashira for their sincere guidance and support.