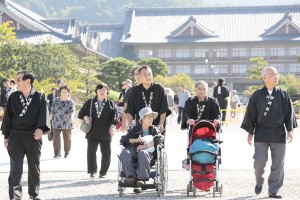 The September Monthly Service of Tenrikyo Church Headquarters took place in the Main Sanctuary on the 26th with the Shinbashira presiding as chief officiant.

In the Service prayer, the Shinbashira thanked God the Parent not only for becoming openly revealed upon the arrival of the Promised Time and conveying the truth about human beginnings—which includes the truth of origin as well as the basis for the beginning of Tenrikyo and the truth of the Joyous Service—but also for the boundless protection that guides us to the Joyous Life. Further, noting that September is the month designated for concerted efforts to sprinkle the fragrance of the teachings and that the 80th annual Tenrikyo Nioigake Day would be conducted over the last three days of the month, he went on to say: “All Yoboku and other followers will work together to engage in missionary activities to convey Your teachings that will truly help settle this world.”

While the mornings and evenings were getting cooler in the Home of the Parent since the autumn equinox, the lingering summer heat was still felt on the Service day, with the high temperature reaching 28ºC (82.4ºF). Yet a brisk fall breeze would occasionally blow in the shade and the areas under the worship halls as worshipers sang the songs for the Service.

Honbu-in Itaro Nishida began his sermon by describing a discussion he had some years ago with a few elderly followers during a visit to a church. One man mentioned that since Tenrikyo teaches the natural term of life for human beings is 115 years, he wished to live that long. Rev. Nishida mentioned that since then he has refrained from using his age as an excuse and has instead been encouraging everyone to aspire to live to be 115 years old. After quoting the following verse from the Ofudesaki—“By this salvation, to fix the natural term of life at one hundred and fifteen years is the single desire of God” (III:100)—he mentioned that for children of the path who have experienced the parental love embodied in this verse, there was no greater delight than to follow the path and aspire to live to be 115 years old.

Rev. Nishida then went on to quote the following verses:

By this salvation given in accordance with the mind of sincerity, you shall be freed from illness, death, and weakening.

If only the dusts are cleanly swept away, then I shall work marvelous salvation.

Step by step, I am solely making preparations truly to save the whole world.

He then continued: “It is God the Parent’s single-hearted desire to save all human beings. These verses explain the steps that will truly save the whole world.” Rev. Nishida then went on to reinforce the importance of sweeping away the dust from the mind and purifying the mind when performing the Kagura Service.

After speaking of how God the Parent drew a fish and a serpent to be the models of husband and wife, Rev. Nishida quoted from The Songs for the Service to indicate that settling the hearts of husband and wife was an important condition for the construction of the world of the Joyous Life. He also said that it was important for a married couple to treat each other kindly and to seek to serve the path together for a long time.

In closing, Rev. Nishida said it was impossible to determine anything based on how long or short a person’s life was. He went on say: “There would be nothing I would be more grateful for than being able to treasure the body we borrow from God the Parent and use it to serve the path for a long time. Let us take delight in the future and follow this path while becoming skillful at being happy.”