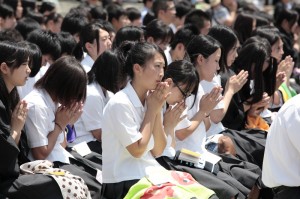 The June Monthly Service of Tenrikyo Church Headquarters took place in the Main Sanctuary on the 26th with the Shinbashira presiding as chief officiant.

In the Service prayer, the Shinbashira said: “We Service performers as well as church head ministers and other Yoboku will strive to grow spiritually in order to near the intention of the Parent who desires to see us human beings help one another. We are also determined to exert our utmost efforts to sprinkle the fragrance of the teachings and engage in salvation work so as to convey the parental heart and the teachings of God the Parent to those suffering from illness and troubles.”

This was followed by a joyous performance of the Kagura Service and the Dance with Hand Movements. Although it had been wet on most days in the Home of the Parent since the beginning of the rainy season, the day of the Service was like a day in May that offered a respite from the rain. As the sun shone brightly in the Sanctuary precincts, signaling to everyone that the height of summer was approaching, worshipers sang the songs for the Service with their hearts in unison.

Honbu-in Noriaki Nagao then took the lectern to deliver the sermon. He began by saying: “Ever since the March 11 disaster in 2011, people in Japan often speak of ‘bonds’ (kizuna). . . . According to the teachings, we become husband and wife or parent and child with one another due to our causality from previous lives. As we become more and more aware of the causality that brings us together, our bonds will deepen of their own accord.”

Rev. Nagao went on to say: “Following the path as a couple or as a family can at times be difficult. Yet it is it is not an unhappy journey. Difficulty does not mean unhappiness.” He then illustrated this point by briefly describing the path Oyasama, Shuji, and Kokan went through while living in the depths of poverty.

Rev. Nagao then cited passages from the Scriptures as well as from The Life of Oyasama and Anecdotes of Oyasama and went on to say: “Happiness depends not on material things but on the way we handle our mind. Our faith helps to correct the way we handle our mind.” He also stressed the importance of fellow followers encouraging one another and deepening their bonds with one another at the level of the family, church, and local community.

After he mentioned that a major distinctive feature of Tenrikyo is the importance of having men and women take part in its central ceremonies, Rev. Nagao said: “At a local church, the service cannot be performed unless a husband and wife, their children, and other followers belonging to the church bond together and deepen their bonds. . . . By performing the Service together, we can deepen our bonds with our spouse, family, and friends of the faith. There is nothing more precious than this. In today’s social climate with the weakening ties of husband and wife and of family, we must spread the teachings powerfully and widely in the world.”

Rev. Nagao further asserted that “the blessings of God the Parent and the workings of the everliving Oyasama never change regardless of the place or the time,” and described an experience of his while serving as the head of Tenrikyo Europe Centre in which he strongly felt the everliving Oyasama working on his behalf. He said: “Because we are living in an age of material affluence, it is quite difficult for us to choose to undergo material hardships. Such being the case, we should make extra efforts to welcome the hardships we encounter while devoting our sincerity to helping those suffering from illness and troubles to be saved.”

Rev. Nagao concluded his sermon by saying: “I would like us to do our best in making the significance of the Service known widely in the world and increase the number of people who can join us in performing the service in each corner of the world.” This, he said, will lead to a further deepening of bonds between husbands and wives in the world and will also strengthen bonds within the Tenrikyo community as a whole.