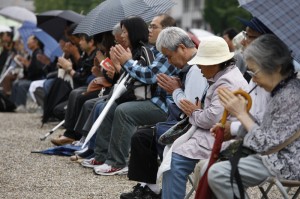 The September Monthly Service of Tenrikyo Church Headquarters took place in the Main Sanctuary on the 26th with the Shinbashira presiding.

The summer heat still lingered throughout September in the Home of the Parent, yet it recently began to cool down on rainy mornings and evenings. A light rain fell on the Service day, making the air feel cool and crisp.

Shortly before 9:00 a.m., the Shinbashira and other Service performers left the Staff Quarters and paid their respects at the Foundress’ Sanctuary and the Memorial Hall before proceeding to the Main Sanctuary.

In the Service prayer, the Shinbashira expressed thanks to God the Parent for the blessings that guide us toward the Joyous Life and pledged to devote efforts toward world salvation on behalf of all followers.

Further, noting that September is the month designated for concerted efforts to sprinkle the fragrance of the teachings and that Tenrikyo Nioigake Day would be conducted over the last three days of the month, he went on to say: “Church head ministers will stand at the forefront as Yoboku and convey God the Parent’s intention to their local communities with gratitude in their hearts.”

This was followed by a joyous performance of the Kagura and the Teodori. Mist rolled from the mountains and autumn rains fell from grey skies as followers with open umbrellas sang the Mikagura-uta in unison.

Honbu-in Ichiro Yokoyama then took the podium to deliver the sermon. He opened by mentioning the succession of natural disasters, starting with the March earthquake and tsunami in northeastern Japan as well as recent typhoons. After quoting a verse from the Ofudesaki—“This universe is the body of God. Ponder this in all matters” (III:40, 135)—he spoke on the importance of pondering that the entire universe, which includes Earth, is God’s body.

Rev. Yokoyama then spoke of how Japan’s remarkable economic progress after World War II was accompanied by a massive increase of trash and environmental destruction. He then said, “No matter how much we human beings may think about ourselves, our very existence becomes precarious when calamities occur in the natural world, which is the body of God the Parent.” Further, “Is it not important for us Yoboku to engage in hinokishin activities that seek to beautify the body of God the Parent?”

Rev. Yokoyama then turned to the topic of the basic teaching of a thing lent, a thing borrowed. He said that we not only ought to learn and memorize the descriptions of the eight dusts that are not in accord with the intention of the Master Lender so that we can make efforts to avoid such wrong uses of the mind, but also work steadily to accumulate virtue and erase the dusts we may have already collected.

He then talked about how doctors and medicine for the human body amounted to weeding and fertilizing for a field. Rev. Yokoyama then quoted from the second Shinbashira Shozen Nakayama and spoke about the relationship between the Sazuke and medical treatment.

After covering the mission of Ikoi-no-Ie Hospital, founded in the year of the 80th Anniversary of Oyasama (1966), he read several letters from non-Tenrikyo patients who awakened to the joy of being kept alive—letters in which they described their impressions at having the Sazuke administered to them while they were hospitalized.

In closing, Rev. Yokoyama touched on the upcoming Tenrikyo Nioigake Day, saying that the event provided an opportunity to convey the preciousness of the path to others. He then went on to say: “My hope is that Nioigake Day will have even more significance with the addition of hinokishin activities to clean surrounding areas with the intent to beautifully maintain the natural environment, which is God the Parent’s body. Let us, in our respective positions, bring joy to Oyasama by spiritedly striving for single-hearted salvation with joy in our hearts at being able to have faith in this final teaching and walk this path.”