Tenrikyo Prays with Other Religions for World Peace in Munich

Seven delegates of Tenrikyo attended the International Meeting of Prayer for Peace held in Munich, Germany, from September 11 to 13. Co-organized by the Community of Sant’Egidio—a lay Catholic group headquartered in Rome—and the Archdiocese of Munich and Freising, the meeting was attended by the world’s religious leaders and several government officials, who gathered and discussed how to address international and global concerns. The meeting also included praying for world peace. 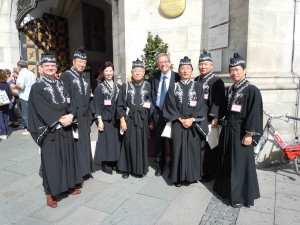 Tenrikyo representatives included Honbu-jun’in Hinao Nagao, who also serves as chief of the North America and Oceania Section of the Overseas Department; Europe Centre Head Yoshinori Tanaka; Dai-Rome Mission Station Head Hideo Yamaguchi; and Kiyama Munich Mission Station Head Takashi Araseki. Entitled “Bound to Live Together: Religions and Cultures in Dialogue,” the meeting involved two plenary sessions, eight forums, and 34 panel sessions with some 250 speakers including four heads of state and government. Speaking as a member of the panel at a session “Japan after the Earthquake,” held on the morning of the 12th, Rev. Nagao explained Tenrikyo’s worldview and relief hinokishin activities in relation to the March 11 disaster in northeastern Japan and made clear how Tenrikyo followers are trying to live up to the mind of “gratitude, moderation, and mutual help” while engaging in the ongoing relief efforts grounded in the teaching of universal brotherhood.

The meeting originated from the one held in 1986 upon the call of the late Pope John Paul II, who invited religious leaders from across the world to gather in Assisi, a Catholic holy site in Italy. From the next year on, the Community of Sant’Egidio has taken the initiative to hold the meeting in a different city in Europe every year. Tenrikyo has participated in the meeting almost every year. In addition, because of a connection developed by local followers with the Community, Tenrikyo has been asked to offer some help behind the scenes. This year, a follower living in Italy and two staff members of the Overseas Department were involved in the event as interpreters.

Dialogue under the Theme “Bound to Live Together”

Munich is the third largest city in Germany, behind Berlin and Hamburg. The meeting used a variety of public places and facilities such as Marienplatz—the city’s central square—the city hall, and church buildings.

On September 11, the day marking the tenth year since the 9/11 terrorist attacks, the commemoration took place before the opening of the event. The Opening Assembly then started with the opening speech delivered by German President Christian Wulff, who said: “In order not to repeat the tragedy that happened a decade ago, mutual understanding between nations will become increasingly important. I am in strong favor of the cause of world peace toward which all of you here are working through dialogue and prayer.” 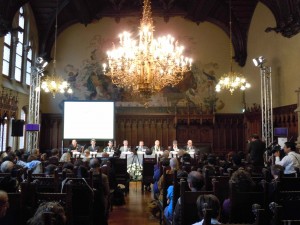 The second day and the morning of the third day were dedicated to plenary and panel sessions on a wide range of themes such as “Modern Men and Women in Search of God” and “Revisioning the World—Beyond the Economic Crisis.” The delegates from Tenrikyo participated in the session called “Japan after the Earthquake,” for which Rev. Nagao was a speaker amongst others from different religions in Japan including Tendai Buddhism and Rissho Kosei-kai. 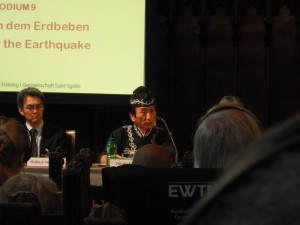 The audience paid close attention to the speeches given by the religious leaders. A variety of questions were then raised by the audience in a question-and-answer session, including, “What is it that we should do in our daily life?” Rev. Nagao responded, “It is important for us, with joyful gratitude in our heart for God’s blessings that keep us alive, to try to help and be considerate of others in our daily life, starting with those close to us, and invite them to do the same.”

On the evening of the last day, participating religious groups were assigned to separate venues to conduct their respective prayers for peace. The Tenrikyo delegation performed the seated service and the first half of the Dance with Hand Movements to the accompaniment of musical instruments. In addition, Mr. Araseki distributed Tenrikyo pamphlets and explained the teachings in plain language to those who gathered. 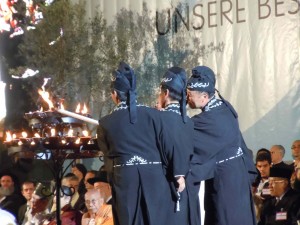 After the prayer, religious representatives marched in procession from their prayer locations to Marienplatz for the Final Ceremony. At the ceremony, several speeches were given, emphasizing the importance of harmonious coexistence of humankind. The “candles for peace” were then lit by leaders from all participating religions, followed by the reading of a collective appeal for the realization of a war-free peaceful world.

Rev. Nagao said: “I refreshed my determination to work toward the recovery of the affected areas as I interacted and had discussions about prayer with religious leaders from around the world. I was deeply moved by the words from a lot of participants and lay audience who were sympathetic to Japan.” Looking back on the event, he commented, “I am glad we had this opportunity to let people in the world know the teachings of hinokishin and mutual help.”