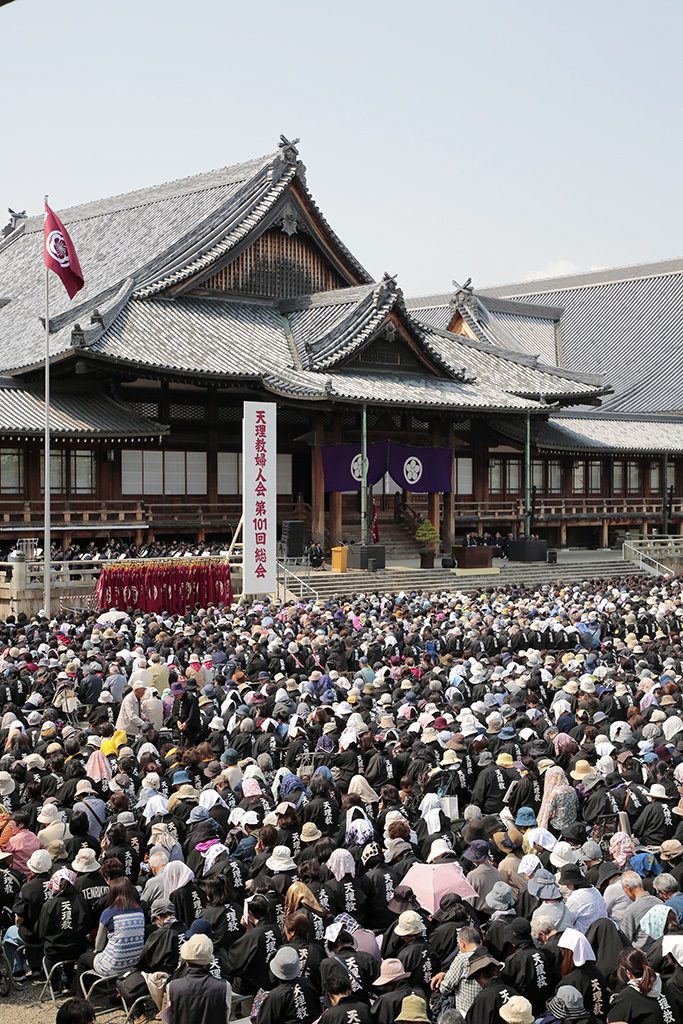 Tenrikyo Women’s Association held its 101st convention in the Inner Courtyard of Church Headquarters on April 19, the day after the Oyasama Birth Celebration Service. The occasion drew some 35,000 members.

The Home of the Parent was blessed with warm spring weather from early morning. When the registration desks opened at 8:00 a.m., groups of members began to file into the Sanctuary precincts one after another, carrying the banners of their chapters. At 9:30 a.m., Women’s Association President Harue Nakayama escorted Successor-Designate Daisuke Nakayama and other guests into the Inner Courtyard. The ceremony began with the singing of the Eight Verses of the Yorozuyo. This was followed by a pledge made by a representative of new members and a progress report presented by Committee Member Kazue Uemura.

President Nakayama then delivered her address. First mentioning the Women’s Association 110th anniversary coming up next year, she talked about what the Shinbashira had said at last year’s Women’s Association 100th convention, explaining that women have a role to play in joining and connecting and in nurturing people by providing care and guidance for them.

She then asked members to fully understand the meaning of the association’s slogan for spiritual maturity, “Let’s follow the Divine Model and become the foundation for the Joyous Life,” and to make efforts to move closer to the goal expressed in the slogan, saying, “I would like us to serve as the source of the Joyous Life in our families, churches, workplaces, and respective communities.”

After mentioning the growing tendency toward human-centeredness and self-centeredness in the world today and the difficulty involved in cultivating the mind of saving others, she stated, “Being committed to nurturing and training ourselves in the hope that we will become true Yoboku who contribute to the realization of the Joyous Life World is, therefore, the basic attitude that should be embraced generation after generation by the followers of the path.”

Then, quoting verses from the Mikagura-uta and the Ofudesaki, she stated that on the way toward the Joyous Life World, we all face difficulties with illnesses and problems but that it is through such experiences that God as our Parent is trying to nurture us. She said: “Parents admonish or warn their children only because they love them. Therefore, it is important to inquire into God’s profound parental love and strive to become aware of it. If we do so, joy and gratitude will well up in us. This is what is called true salvation.”

She went on to say, “In order to purify our minds, it is important to implement the teachings, thus always striving to sweep away the dusts of our mind and cleanse our hearts and trying to maintain the mind of saving others and take action to help save others by doing anything we can.” She further stated that the Service and the Sazuke are of the utmost importance in this regard. She then said that Oyasama had directly taught the Service to the followers and urged them to perform it as it is the fundamental component of the path of single-hearted salvation. “We can sweep away our own dusts of the mind by sincerely and earnestly performing the service and administering the Sazuke while praying for the salvation of others,” the president said.

Referring to the goal the association had set for its 110th anniversary—“Let us work together to ensure that each member can be blessed with two new members”—President Nakayama encouraged members, saying, “With this in mind, I would like all of us to implement our activities by strengthening our awareness of being association members.” With regard to the 29th Young Women’s Convention, scheduled to take place on November 3, and the Pep Rally for the 110th Anniversary of the Women’s Association being held regionally from May, she said: “Making efforts to respond to God the Parent’s intention is to advance our spiritual construction. Let us make progress in our spiritual growth by implementing our concrete guidelines in our daily lives.” She concluded her address by urging all members to take part in carrying forward the path for world salvation, make efforts to nurture themselves into useful Yoboku, and increase the number of fellow members.

Next, Director-in-Chief of Religious Affairs, Yoichiro Miyamori took the podium to deliver his address. After quoting from The Life of Oyasama, Rev. Miyamori talked of the Parent’s kind manner of speaking to and caring for children, which is shown in the Divine Model that Oyasama left for us. He went on to say that what all Women’s Association members should strive for is to follow the Divine Model of Oyasama and become the “foundation for the Joyous Life” in daily life, as expressed in the association’s slogan for spiritual maturity.

He then said that only when children become parents do they realize how indebted they are to their own parents and that, similarly, only when we Yoboku bring people back to Jiba are we able to understand the mind of Oyasama as well as the painstaking efforts made by our predecessors to convey the teachings. He added that we can come to understand how indebted we are to God the Parent and Oyasama when we earnestly pray for the salvation of others. “Working to help save those close to us will allow us to grow spiritually into fine Yoboku as well as to know how much we are blessed,” he said.

He concluded his address by saying: “I request that you take advantage of the Pep Rally, scheduled to take place this year, so that you can settle Oyasama’s Divine Model in your mind and bring understanding to one another. It is my hope that you will receive ‘splendid blessings’ from God the Parent during the special Besseki Months so that you will take great strides as Yoboku toward your association’s 110th anniversary next year.”

In the afternoon, commemorative lectures were held under the theme “Let us spread the Joyous Life—let us work together to ensure that each member can be blessed with two new members.” The lectures were held at six venues: Dining Hall 2, Dining Hall 3, East Lecture Hall, Oyasato-yakata East Right Wing 1, Oyasato-yakata East Left Wing 5, and Tenri City Auditorium. A total of 13,035 people attended the lectures.