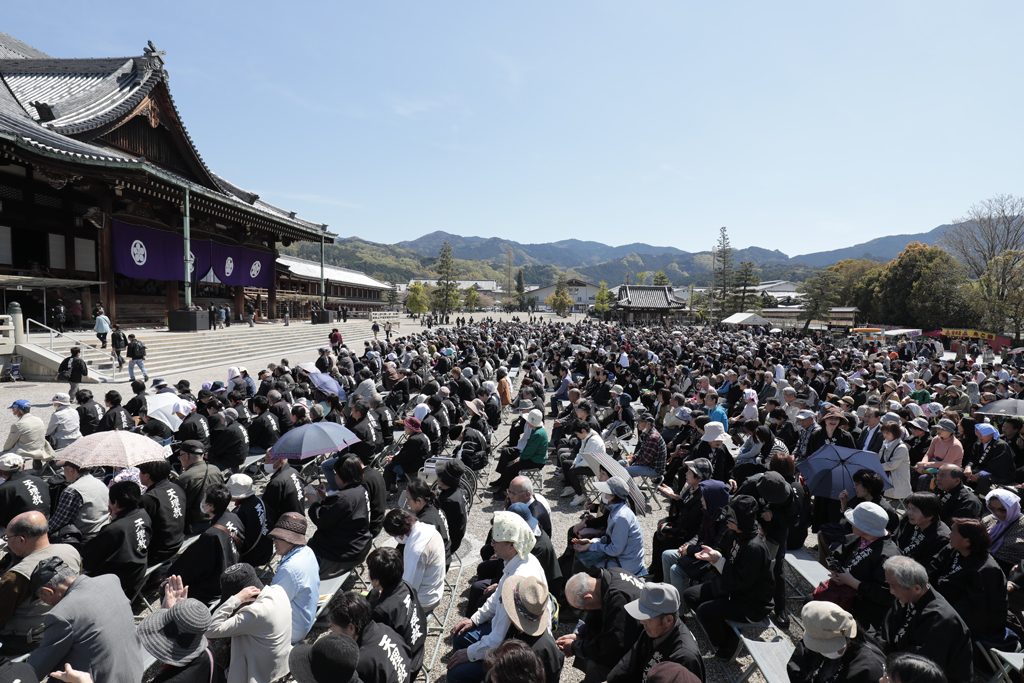 On April 18, the Oyasama Birth Celebration Service was conducted to commemorate the everliving Oyasama’s 221st birthday in the Main Sanctuary and the Foundress’ Sanctuary of Tenrikyo Church Headquarters with Successor-Designate Daisuke Nakayama presiding as chief officiant.

Approximately 60,000 followers from across Japan and overseas returned to Jiba for this occasion.
Among them was Ms. Tippapa Issaraseree, who returned to Jiba from Bangkok, Thailand, for the third time. This time, she brought a friend of hers, Mr. Worachit Into, who attended his first Besseki lecture. She commented with a smile: “Oyasama’s way of living was always full of mercy. I try to follow Her example of how to use the mind. I would like to delve deeper into the teachings and convey them to those around me.”

At the appointed time, Rev. Daisuke Nakayama and other Service performers left the Staff Quarters. After they paid their respects to Oyasama at the Foundress’ Sanctuary, “Oyasama’s Birthday Celebration Song” was played and sung in the Inner Courtyard, creating a celebratory ambiance. Rev. Daisuke Nakayama then proceeded to the Memorial Hall and then to the Main Sanctuary—where the Shinbashira, who is recuperating, joined in worshiping together inside the partition bars.

In the Service prayer, Rev. Daisuke Nakayama said, “All of us Yoboku, including the church head ministers, take to heart once again the path of the Divine Model that Oyasama demonstrated through Her own example and intend to move forward with our minds in unison as we strive to serve as Your instruments.”

The prayer was followed by the joyous performance of the Kagura Service, after which the Shinbashira and his wife, Harue, as well as Successor-Designate Daisuke Nakayama and his wife, Nobue, proceeded to the Foundress’ Sanctuary to serve a meal to the everliving Oyasama. In the meantime, the Dance with Hand Movements was performed in high spirits. Worshipers joined in singing the Songs for the Service with their minds in unison in the warm spring weather with the temperature rising up to 23 degrees Celsius (73.4 degrees Fahrenheit).

The sermon was delivered by Honbu-in Yoshitaro Ueda. In his sermon, he touched on a controversial aspect of the life of Oyasama—namely, Oyasama’s attempt to drown Herself in the village shrine pond during the period when She was falling into the depths of poverty—and shared his thoughts on how to interpret it, referring to the book entitled Dai jurokkai kyogi koshukairoku (The record of the 16th doctrinal seminar). The book records the second Shinbashira’s 1956 lectures on the draft of The Life of Oyasama.

Rev. Ueda introduced two principles concerning Oyasama’s position that were proposed by the second Shinbashira: (1) there was no human mind intermingled in the mind of Oyasama, whose mind is always that of Tsukihi, and (2) Oyasama served in Her position as the Parent of the Divine Model. Based on these two principles, Rev. Ueda stated: “[I]t is my view that the opposition from those around Her was manifested as Her irregular behavior of attempting to drown Herself. . . . [F]rom the perspective of those of us in later times, it is possible to regard such incidents as a part of the Divine Model that convinces us that God the Parent will surely protect us in the face of hardships such as dilemmas in human relationships that followers of the path may experience in the midst of missionary work.”

Referring to the opposition from those around Her, public derision, and the anguish of Oyasama’s husband, Zenbei, Rev. Ueda said that, if we based ourselves on common sense, we might not be able to regard the first few years of Her life after the Teaching’s founding as the Divine Model of the Joyous Life. He mentioned that those around Her only saw traditional values being lost and could not see even a glimpse of the promising future at the early stage of the leveling of the ground to advance the construction of the joyous world. He pointed out that those people were probably unable to cast away their sense of lament and confusion, even though they were told: “[A]fter twenty or thirty years have passed, a day is sure to come when all of you will admit the truth of My intention,” or “I will return ten thousandfold.” He then said: “Her heart was always filled with the parental love that wished to save all people in the world. Her life was solely about the Divine Model of single-hearted salvation. Her husband, Zenbei, and Her children, who went through the hardships together with Her, must have gradually deepened their conviction that there was nothing wrong with Oyasama’s words and deeds, even though they might not have fully understood what the path of salvation meant for them.”

Touching upon his 38 years of experience as a church head minister, Rev. Ueda said that he felt he had been able to ponder deeply and realize something important to him especially at times when things had gone against his wishes. He quoted a Divine Direction that says: “Why is it that health disorders happen to good people? You say that some people with dust of the mind do not come down with health disorders. If things were so simple as that, there would be no need to explain the teachings at length day after day. I did not spread this path just for the benefit of one person. Listen carefully and understand this well. It was because I desire to save the whole world, not just one person but the whole world, that I spread this path. It will not do to think lightly of the path” (Osashizu, May 17, 1900). He then stated: “Often, we administer the Sazuke to those in front of us to pray for their recovery from illness. Yet, God the Parent sometimes intends not only to give training to those who get sick themselves but also to make arrangements for fulfilling the much grander intention of saving all people in the world. Or rather, we should say that God the Parent is always giving us training through our individual illnesses and troubles with the profound intention of saving all people in the world.”

Rev. Ueda continued: “Pondering in this way, we can understand that it is more important to take advantage of our knot of difficulty by making a point of settling our mind so that we can advance toward world salvation and keep going, rather than vainly lamenting over good people’s illness or passing. Good people’s illness can be seen as a challenging way of encouraging those around them to make more focused efforts to grow spiritually.”

Before closing his sermon, Rev. Ueda encouraged the followers by saying: “The more serious a given knot of difficulty is, the more difficult it may be to ponder over it. Yet, the day will surely come when we can eventually understand from the bottom of our heart that we have been saved thanks to the knot, even if an illness may not have been cured. The same goes for our other troubles. Also, we must not forget that all the knots we experience are God’s training and guidance for us, which come from the great intention of God the Parent to save all people in the world.”

After the sermon, Successor-Designate Daisuke Nakayama returned to the Foundress’ Sanctuary to read a prayer to Oyasama. After extending words of celebration, he expressed on behalf of all followers their determination to remain deeply conscious of their duty to follow and hand down to future generations the precious path that Oyasama opened and to strive in unity of mind to fulfill the roles with which they are entrusted.

The “Joyous Chorus” then took place in the Inner Courtyard. This annual event is cosponsored by the Women’s Association, the Young Men’s Association, and the Boys and Girls Association. During this event, two members of the Boys and Girls Association led those present in saying, “Happy birthday, Oyasama,” in front of the Foundress’ Sanctuary. The assembled followers joined together in singing five choral pieces, including “Happy Birthday, Oyasama.” The joyful singing to the accompaniment of the band performance resonated throughout the Sanctuary precincts. 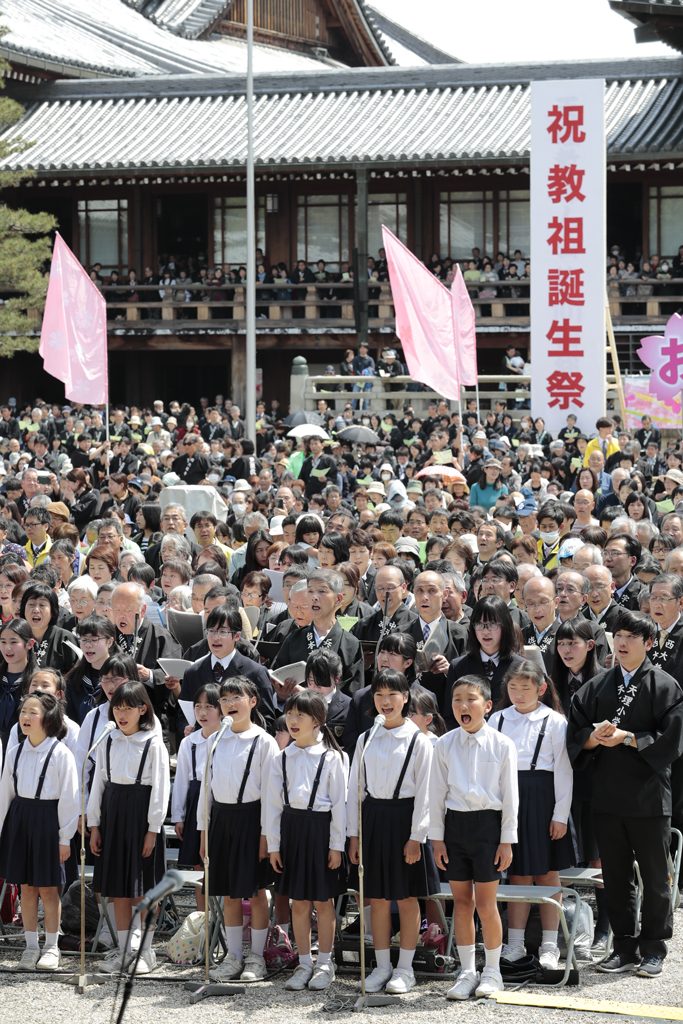