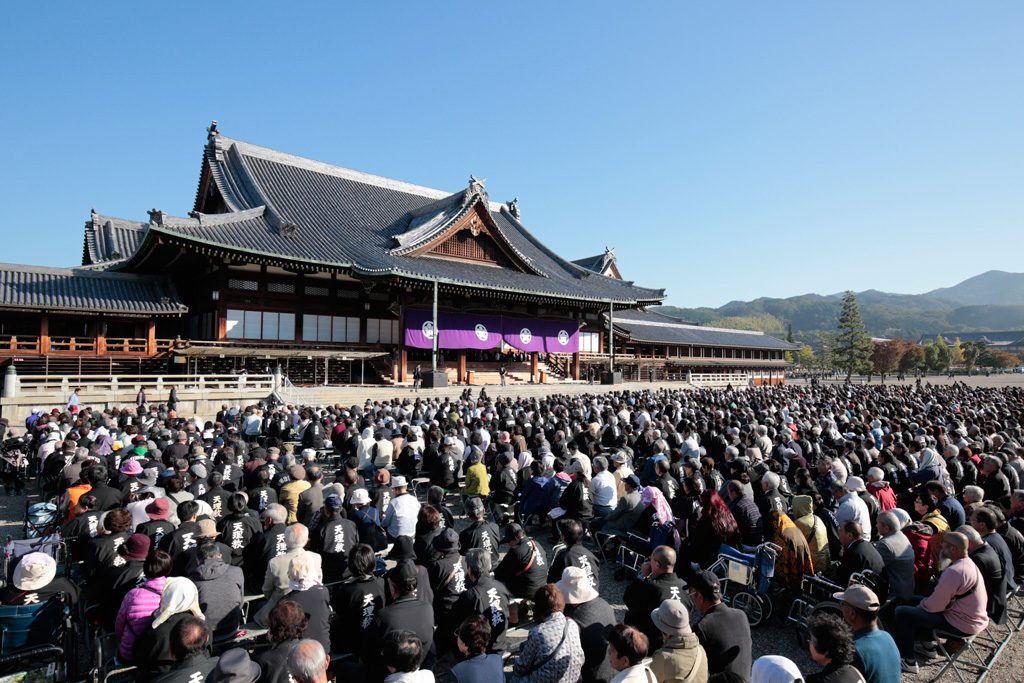 The Autumn Grand Service for the 181st year of the Teaching was performed in the Main Sanctuary on October 26, commemorating the day of the founding of the Teaching in 1838—the day when Oyasama was settled as the Shrine of Tsukihi through the divine revelation in which God said, “At this time I have descended here to save all humankind.” The Service started at 8:00a.m.—the hour at which Oyasama was settled as the Shrine of Tsukihi. Approximately 66,000 Yoboku and followers from both within and outside Japan attended the Service.

Successor-Designate Daisuke Nakayama served as chief officiant on behalf of the Shinbashira. In the Service prayer, he expressed gratitude for God the Parent’s warm parental love, blessings, and guidance, which help us work toward the Joyous Life, and said, “We try each day to keep our minds singly focused on Jiba and to perform our tasks in ways that we hope can be acceptable to You, God the Parent, and Oyasama, who are one in truth with Jiba.” He went on to say: “At a time of increasing confusion and uncertainty, all of us Yoboku, including church head ministers, make a point of taking the intention behind the Teaching’s founding as our guiding principle and ensure that we always keep sight of our ultimate goal. We intend to do our best to accomplish our mission as Yoboku by sharing the joy we experience through our faith with as many people as possible.”

The Kagura Service and the Dance with Hand Movements were then joyously performed. Blessed with splendid autumn weather, the worshipers, who had filled the four worship halls, the Corridor, and other areas in the Sanctuary precincts, joined together in singing the Mikagura-uta, the songs for the Service, with their minds in unison.

After the Service performance, Director-in-Chief of Religious Affairs Yoichiro Miyamori took the podium to deliver the sermon.

Rev. Miyamori first talked about some key events from The Life of Oyasama and shared his thoughts on the profound parental love with which Oyasama used those events, which involved Her family members, to urge us to be single-hearted with God. He spoke at some length about what state of mind and what sort of behavior are required to allow us to be single-hearted with God. He said that, on the occasion of the Autumn Grand Service, all of us should reflect on our own way of following the path.

Rev. Miyamori went on to mention that the Shinbashira was currently recuperating from illness and concluded his sermon by saying, “[N]ow is the time for all of us to do everything we can to contribute and dedicate our true sincerity to Jiba and take great strides in single-hearted salvation so that, when he returns to his duties, we can show him how we are following the path of the Divine Model spiritedly and in unity of mind.”

This year approximately 700 people from 22 overseas countries and regions returned to Jiba for the Autumn Grand Service—including many members of the Young Men’s Association, who also participated in their 100th anniversary convention, which took place on October 28. The prayer and sermon at the Grand Service were simultaneously interpreted in 10 languages: English, Chinese (Mandarin), Taiwanese, Korean, Portuguese, Spanish, French, German, Thai, and Nepali.