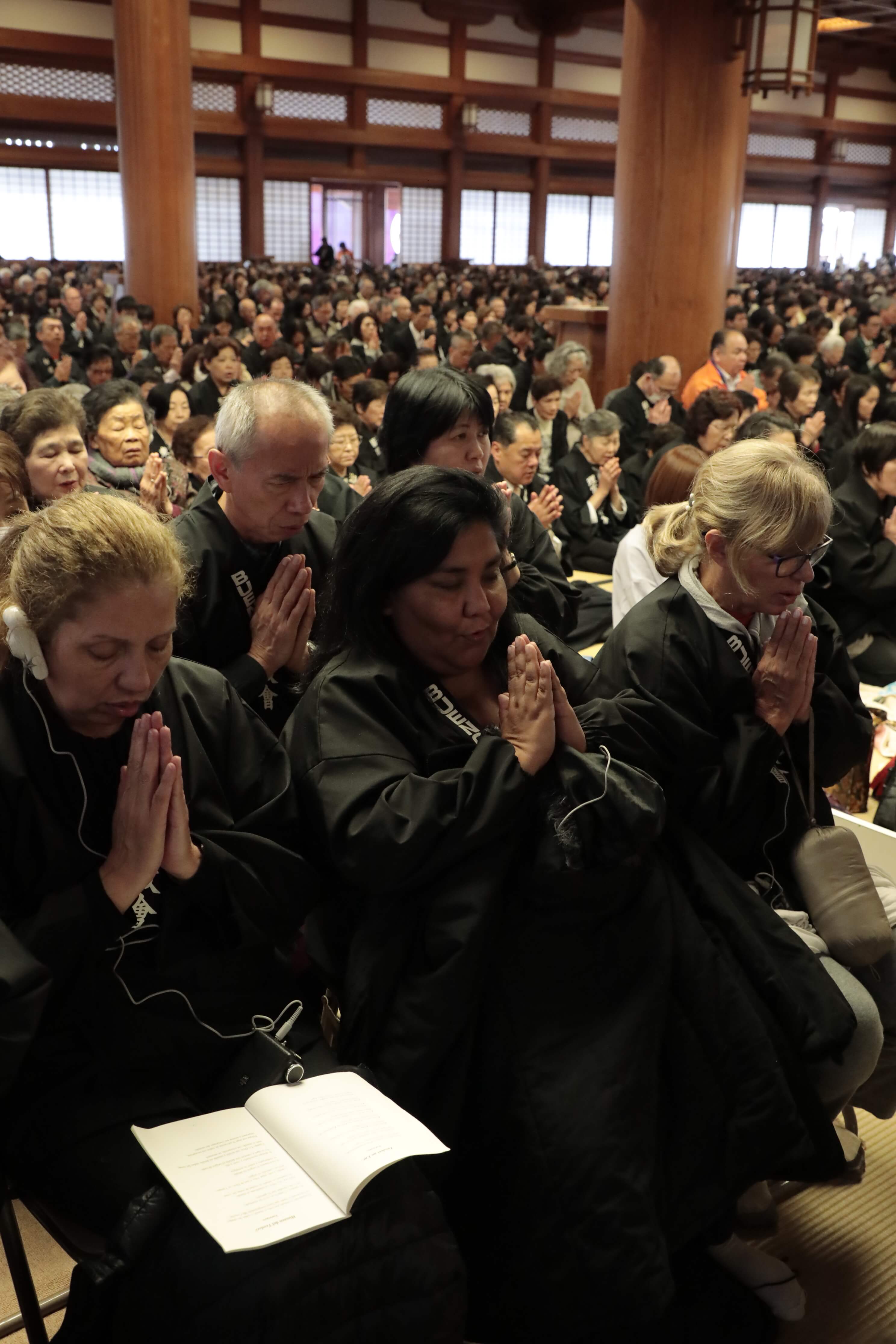 On April 18, the Oyasama Birth Celebration Service was conducted to celebrate the 220th birthday of the everliving Oyasama in the Main Sanctuary and Foundress’ Sanctuary of Tenrikyo Church Headquarters with the Shinbashira presiding as chief officiant. Approximately 60,000 followers from across Japan and overseas returned to Jiba yearning for “the Parent of the Divine Model,” and sang the Songs for the Service together in unity of mind.

Among them was Ms. Magaly Torres, who returned to Jiba from Mexico. In October last year, her mother passed away for rebirth from lung cancer. She said: “My mother, as an instrument of Oyasama, devoted herself to salvation work even after being diagnosed with cancer. I am going to receive the truth of the Sazuke during my stay this time. I expressed my resolve at the Main Sanctuary to tread in my mother’s footsteps and engage in sprinkling the fragrance and saving others.”

Shortly after 9:40 a.m., the Shinbashira and other Service performers left the Staff Quarters for the Foundress’ Sanctuary. After they paid their respects to Oyasama, “Oyasama’s Birthday Celebration Song” was sung together by the followers in the Inner Courtyard, which enhanced the celebratory ambiance of the day.

The Shinbashira then proceeded to the Main Sanctuary and ascended the dais to deliver the Service prayer to God on behalf of all followers. In the Service prayer, he said: “On this day, we Service performers as well as church head ministers and other Yoboku will take this opportunity to reflect upon our way of following the path in the light of Oyasama’s Divine Model, discuss it with one another, and encourage one another, thereby enabling all Yoboku to engage in salvation work.”

The joyous performance of the Kagura Service and the Dance with Hand Movements followed the Service prayer and worshipers sang in chorus the songs for the Service with their minds in unison.

After the Kagura Service, the Shinbashira and his wife as well as Successor-Designate Daisuke Nakayama and his wife, proceeded to the Foundress’ Sanctuary to serve a meal to Oyasama.

The sermon was then delivered by Honbu-in Koji Masui. He first mentioned that Oyasama has “the causality of the soul of the mother in creation.” He then emphasized the importance of following Oyasama’s Divine Model, savoring the joyous way of living, and conveying that joy to others who have yet to know Oyasama’s intention.

Referring to the Divine Model of Oyasama, he pointed out that it began when Oyasama started falling to the depths of poverty as intended by God the Parent. “In spite of people’s derision,” he said, “She took great pains to teach them, patiently helping them comprehend the teachings of God the Parent.” He then stressed that Oyasama taught us through Her own example to change our perspective from “human standards” to “single-heartedness with God,” that is to say to “keep the mind single-hearted with God instead of resorting to common sense and human thinking.”

He then quoted the words of Oyasama: “Unless you fall to the depths of poverty, you cannot understand what sufferers feel.” These words are, he said, a “reminder” for all of us who follow the path us to “become humble, put ourselves in sufferers’ shoes, and try to understand their thoughts and feelings.”

Rev. Masui continued by referring to the fact that as miraculous blessings began to be shown and more and more followers paid visits to Jiba, some people were cursing and abusing Oyasama and Her followers. Moreover, as a result of Her mission to those in the high mountains, Oyasama had to undergo many hardships and imprisonment. Touching upon the illnesses and troubles that we sometimes go through in our lives, he emphasized that what Oyasama taught us was that “we can become joyous and spirited simply working with our mind in any situation and especially when we have to go through suffering and troubles.” He said, “Let all of us follow Oyasama’s Divine Model and savor the joyous way of living.”

He concluded his sermon by saying, “Oyasama continues to work for us by virtue of Her eternal life. We all would like to express our gratitude for the daily blessings of God the Parent, rely on God the Parent and Oyasama, and walk the path of making repayment joyously and spiritedly.”

Following the sermon, the Shinbashira returned to the Foundress’ Sanctuary and read a prayer to Oyasama. He first extended words of celebration and expressed on behalf of all followers their determination to deepen their joy and awareness of serving as instruments of Oyasama, follow the Divine Model honestly and straightforwardly, and devote themselves to the tasks of single-hearted salvation.