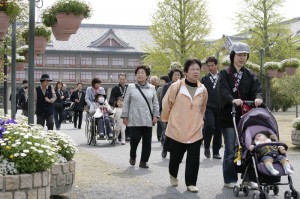 The April Monthly Service of Tenrikyo Church Headquarters was conducted at the Main Sanctuary on the 26th with the Shinbashira presiding. On the Service day, a warm wind blew into the Home of the Parent due to a high atmospheric pressure system located to the south of the Japanese archipelago. While spring sunshine illuminated the young tree leaves in and around the Sanctuary precincts, flowers such as pansies and daisies greeted followers walking on the pathways leading to the precincts.

At 9:00 a.m., the Shinbashira and the other Service performers left the Staff Quarters to pay their respects at the Foundress’ Sanctuary and the Memorial Hall before proceeding to the Main Sanctuary.

In the Service prayer, the Shinbashira first expressed gratitude for the parental love of God the Parent, who always guides human beings toward spiritual maturity. He then said: “We Service performers as well as all church head ministers and Yoboku are determined to have a proper grasp of Your intention in any knot that we may encounter. In addition to heightening our sincerity, we resolve to remain thoroughly committed to the construction of our minds and are presently striving to spread salvation in wider circles to every corner of the world.”

He then touched upon the annual Tenrikyo Hinokishin Day, which was to be observed, in Japan, on April 29. “In appreciation of the ten aspects of the complete providence that keeps us alive,” said the Shinbashira, “the entire Tenrikyo congregation is determined to respond to Your blessings and savor the joy of living by spiritedly engaging in hinokishin activities across the globe.”

The joyous performance of the Kagura Service and the Dance with Hand Movements then followed as worshipers sang the Mikagura-uta in unison.

After the Service performance, the sermon was delivered by Honbu-in Yoshikazu Terada. He first spoke about what Yoboku should be like by quoting the Shinbashira’s sermon delivered at this year’s Spring Grand Service. Basing himself on an Ofudesaki verse, “Though I have gathered many and varied trees, those bent or crooked are of no use” (III:50), as well as the Story of Creation, he stressed that Yoboku should be first and foremost single-hearted and straightforward. He also explained that it is important for Yoboku to strive to cleanse their hearts based on the intention of God the Parent.

He then pointed out that, because it is hard for human beings to clear the dusts of the mind, God the Parent reflects the state of their minds on their bodies as health disorders or other troubles in order to provide them with the care that they need. While noting that human beings tend to get depressed as well as feel uneasy and gloomy when they are given guidance in the form of illness or trouble, he appealed to the congregation by saying: “We must first accept that what happens reflects the state of our own minds. By pondering deeply over the situation, we must understand the intention of God, the Parent of all human beings. It is important for us to open up our hearts and steadily take the kind of steps that allow a bud to sprout from the knot, thereby making steady progress along the path.”

Honbu-in Terada then referred to The Life of Oyasama, Foundress of Tenrikyo and touched upon the passing of Zenbei, Oyasama’s husband, as well as Oyasama’s hardships resulting from government authorities’ persecution. He then stressed that it is important for Yoboku to reflect upon themselves based on the Divine Model of Oyasama and thereby spiritedly carry out the tasks that come with their positions.

He then touched upon the fact that he had been diagnosed with cancer eight years ago and shared his reflections by explaining how he had decided to devote himself to clearing his mind while performing any tasks that are related to God even at the cost of his life. He then moved on to say that he was later appointed as bishop of the Mission Headquarters in South Korea and had the honor of welcoming the Shinbashira and his wife to the coutnry, which was the first of its kind in the history of Tenrikyo’s mission in South Korea.

Further, he talked about how he had recalled the day of origin of his family’s faith through facing the knot of his wife’s passing. After touching upon his own illness, he said: “It is precisely because God loves us human beings that God gives us guidance in the form of illnesses and troubles. Because those bent or crooked are of no use, God gives us care so that we can be more straightforward.” He then added: “It is important for us to inquire into the intention of God the Parent, take to heart God’s intention, and actually put it into practice.”

After quoting the Shinbashira’s sermon delivered at last year’s Autumn Grand Service and a Divine Direction that says, “[T]here is no path but the path of the Divine Model” (November 7, 1889), Honbu-in Terada concluded his sermon by saying, “Let all of us Yoboku strive in high spirits to fulfill our roles as Oyasama’s instruments by melting into Her mind so that we can be helpful and useful for the work of world salvation.”