The 50th Memorial Service for the 2nd Shinbashira Conducted 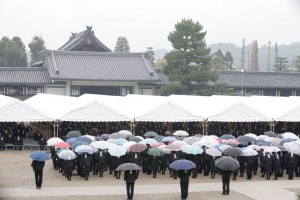 The 50th memorial service for the second Shinbashira, Shozen Nakayama, was solemnly observed on November 14 at Church Headquarters with the Shinbashira presiding as the chief officiant.

The service began at the Main Sanctuary, where the Dance with Hand Movements was performed to the Eight Verses of the Yorozuyo and the Twelve Songs.

Thereafter, the Shinbashira changed into his kyofuku robe and proceeded to the Memorial Hall for a ceremony. The Shinbashira read a prayer, expressing his gratitude and respect for the second Shinbashira’s painstaking efforts and accomplishments.

Promoting overseas missionary work was one of the most significant areas in which he took great interest. He traveled six continents on nineteen separate tours, encouraging missionaries wherever he went.