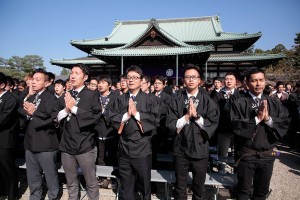 On October 27, the day after the Autumn Grand Service, the Young Men’s Association held its 93rd Convention in the Inner Courtyard of Church Headquarters. Under clear autumn skies, the convention drew approximately 11,000 people including association members from all parts of Japan as well as overseas.

About one hour before the start of the convention, groups of association members bearing their chapter flags began arriving in the Inner Courtyard one after another. Although a thick morning haze had hung over the Home of the Parent, it cleared away before the convention began.

At 10:00 a.m., Association President Daisuke Nakayama escorted the Shinbashira, Mrs. Harue Nakayama, Mrs. Nobue Nakayama, and other guests into the Inner Courtyard. A moment of worship was followed by the hoisting of the association flag, the opening declaration, and the singing of the Eight Verses of the Yorozuyo.

President Nakayama then took the podium to deliver his address. Having explained the association’s activities leading up to its 100th anniversary, he requested the members to work to transform their own minds through using the kind of language and performing the kind of actions that can bring joy to everyone, to convey the joy they have experienced to those who have yet to follow the path, and to invite them to their churches etc. while continuing their efforts in salvation work.

He then talked about his own new effort called a “Friendly Conversation Gathering,” which he launched in November last year to make it easier to talk about the teachings with newcomers to the path in a friendly and easy-to-understand way in hopes of creating opportunities for salvation work.

He also clarified two important points about following the path as Arakitoryo, pioneers of the path. The first is our spirit of simple openness, and the second is that, when we implement the Joyous Life, the opportunity for salvation work will come to us.

Having mentioned that everything starts with changing our stance of mind by practicing filial piety and maintaining harmony in our husband-wife relationship, he also stressed that it is important for Arakitoryo, pioneers of the path, to bring about a chain of salvation work here and there in this season of the 100th anniversary. 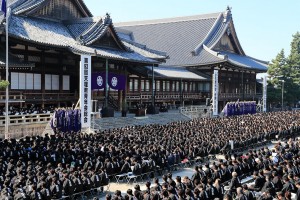 Lastly, he announced that Tenrikyo Young Men’s Association would be holding its next convention as the 100th Anniversary Convention on October 28, 2018, and concluded his address by saying, “I am looking forward to seeing you and sharing our joy and very best smiles here at this place exactly a year from now.”

Next, the Shinbashira took the podium to deliver his address. He began by reflecting upon the second Shinbashira’s efforts to advance “restoration” after World War II ended in 1945 as well as the history of the Young Men’s Association.

He then explained the twofold meaning of serving as Arakitoryo, pioneers of the path. On the one hand, Arakitoryo are those who proactively go outward to spread the teachings in unexplored regions where the teachings have not yet been conveyed and, on the other, these pioneers should go inward to cultivate their faith and settle the teachings in their minds, thereby striving to grow spiritually toward maturity.

He went on to say: “Making efforts in both these areas will allow you members of the Young Men’s Association to bring your own faith into accord with the mind of God the Parent and Oyasama, thereby making straightforward spiritual growth. Your association’s fundamental significance is that you members can help one another in making spiritual growth.”

Having likened some important aspects of cultivating faith to agricultural work, he said: “I want you to understand that adolescence is the best season for laying a good foundation to build on and preparing ʻsoil’ to cultivate unshakable faith in the future. I also hope that you will maintain your focus on solidifying the foothold and acquiring the way of thinking based on the teachings instead of getting caught up in the immediate things that happen in your life.”

He added: “In order not to misuse the freedom of mind, it is important for you to familiarize yourselves with the Ofudesaki. . . . [T]he Ofudesaki helps all of us following the path to cultivate our mind. Please try to familiarize yourselves with the Ofudesaki so that you can firmly settle in your mind the parental love of Oyasama, who wishes for nothing but the spiritual growth of all human beings.”

He went on to say: “In your respective present situations, you can certainly find God’s personal message for you. I hope that you will develop the strength that allows you to skillfully find joy in any given situation, thereby growing into fine young men worthy of being members of Tenrikyo Young Men’s Association.”

In conclusion, he said, “I would like to request that all of you association members use your vitality and enthusiasm to build up momentum toward the 100th anniversary of your association and do your utmost to carry out the activities of your respective chapters while helping one another grow spiritually.”

Following the Shinbashira’s address, Association Chairman Yoshihito Ando took the podium and gave a talk on the theme “Toward the 100th Anniversary of Tenrikyo Young Men’s Association.” He encouraged the members to work spiritedly to prepare for next year’s 100th Anniversary Convention, saying, “Feeling grateful that we are association members in this once-in-a-lifetime season, let us rejoice in carrying on the path of our parents and take on new challenges as we move toward the future while powerfully seeking the path and spreading the teachings as befits Arakitoryo, pioneers of the path.”

To bring the convention to a close, all members recited the “Guiding Principles of Arakitoryo” and joined together in singing “Tenrikyo Young Men’s Association Song.” After the conclusion of the convention, they also gave three cheers with joy in their hearts to celebrate the marriage of President Nakayama and his wife, Nobue.