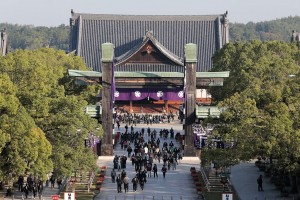 On October 26, the Autumn Grand Service commemorating the Teaching’s day of origin was performed in the Main Sanctuary of Tenrikyo Church Headquarters with the Shinbashira presiding as chief officiant. This Service commemorates October 26, 1838, the day when Oyasama was settled as the Shrine of Tsukihi through the divine revelation in which God said, “At this time I have descended here to save all humankind.” Approximately 76,000 Yoboku and followers from both within and outside Japan attended the Service.

On the Service day, the Home of the Parent was blessed with clear skies in contrast to the rainy weather that had continued over a week until the previous day. Shortly before 8:00 a.m.—the hour at which Oyasama was settled as the Shrine of Tsukihi—the Shinbashira left the Staff Quarters with other Service performers for the Foundress’ Sanctuary and the Memorial Hall to pay respects before proceeding to the Main Sanctuary.

In the Service prayer, the Shinbashira expressed gratitude for God the Parent’s warm parental love and said, “On this auspicious day, all of us Service performers as well as church head ministers and other Yoboku will once again take to heart Your intention contained in the Teaching’s day of origin and renew our resolve to make further spiritual growth, as we are determined to take our vigorous steps of single-hearted salvation through sprinkling the fragrance of the teachings, helping others be saved, and raising and nurturing the successors of the path.” 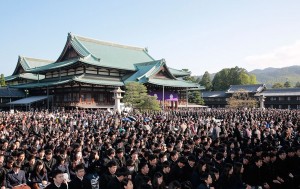 The prayer was followed by the performance of the Kagura Service and the Dance with Hand Movements. Worshipers joined in singing the songs that accompany the Service with their minds in unison.

The Shinbashira then took the podium to deliver the sermon. Reflecting on God the Parent’s first revelation, he mentioned that the purpose for which this path was laid was “to save all humankind and reconstruct the world into the Joyous Life World so desired by God the Parent.” He went on to say that God the Parent has nurtured us human beings with unchanging parental love since the beginnings of origin and, then, opened the ultimate teachings on October 26, 1838, at the arrival of the Promised Time.

Speaking on Oyasama’s fifty-year Divine Model, he explained: “The Divine Model demonstrated by Oyasama is, above all, a model of single-hearted salvation. Yet, from another point of view, it can also be described as an exemplary model of how to live the Joyous Life. . . . From an ordinary human perspective, we get the impression that Oyasama’s life was nothing but a series of hardships and difficulties. Yet She always remained high-spirited and joyous while going through all Her experiences, with Her heart filled solely with parental love for us, Her children. Her journey of life, therefore, includes many pointers on how we can live joyously.”

He also said, “While sternly admonishing people for their mistaken ideas, She makes it clear that Her admonishment comes from Her parental love.” He thus highlighted Oyasama’s profound parental love with which She taught the divine truth in a strict manner as well as guided and instructed people in a loving and caring way.

In order to move closer to the Joyous Life, he pointed out that it was essential to cleanse and purify our minds and to focus on helping others be joyous and spirited. He encouraged the congregation by saying, “Let each of us sow the seeds of the Joyous Life in our daily lives and expand the circle of joy further and further.”

The Shinbashira also stressed that in order to actually follow Oyasama’s Divine Model, instead of merely imitating Her actions, it was important to seek Oyasama’s parental love contained in Her Divine Model. In this respect, he referred to the Three Scriptures—namely, the Ofudesaki (The Tip of the Writing Brush), the Mikagura-uta (The Songs for the Service), and the Osashizu (The Divine Directions)—as “the most reliable basis for our faith.” He then told the listeners how the second Shinbashira explained the significance of the Three Scriptures: “The second Shinbashira said that the Ofudesaki clarifies fundamental principles; the Mikagura-uta, which in fact preceded the Ofudesaki chronologically, provides life guidance; and the Osashizu provides instructions related to actual, concrete situations. He stressed that the Ofudesaki, in particular, records and clearly indicates the fundamental teachings and principles of the Tenrikyo faith, making it the most important and fundamental Scripture of Tenrikyo.”

Touching upon the hardships that the second Shinbashira endured as a result of the wartime restrictions and the efforts of “restoration” that he launched immediately after the war ended, the Shinbashira pointed out: “While the second Shinbashira’s achievements cover a wide range of fields and areas—as is well known even outside the Tenrikyo community—to him the most important thing was the publication of the Scriptures and other doctrinal works. In other words, his ultimate intention in conducting all the different activities was to help spread Oyasama’s teachings throughout the world, thereby contributing to reconstructing the world into the Joyous Life World.”

Mentioning that this year marks fifty years since the second Shinbashira passed away for rebirth, the Shinbashira concluded his sermon by saying: “I think we would do well not only to recall and honor his great achievements but also to pledge that we will familiarize ourselves more and more with the Ofudesaki and other Scriptures, whose publication he prioritized over everything else and which he himself studied deeply. Let us pledge that we will keep in mind the spirit of ‘restoration’ with which to work toward the exact faith taught by Oyasama and that we will make a point of applying The Doctrine of Tenrikyo to our daily lives to help us live our lives and run our churches in accord with the teachings. Let us also pledge that we will use The Life of Oyasama as a basis for following the Divine Model. At this Autumn Grand Service, which commemorates the Teaching’s founding, I suggest that we once again take to heart God the Parent’s intention to save all humankind and guide the world to the Joyous Life, so that we will together make steady progress toward the Joyous Life while following the Divine Model, which Oyasama demonstrated through personally implementing the path that She laid without any previous model to refer to.”