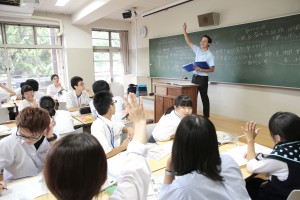 The High School Division of the Students Training Course was held at the Home of the Parent between August 9 to 15 with a total of 928 participants from all parts of Japan. Students were put into small groups—each of which was staffed by a male and female counselor—in which they studied the teachings and shared their feelings and thoughts with one another, thereby cultivating a sense of gratitude and fostering friendships.

Starting this year, a new grade-based format was adopted. Until last year, students were divided into groups according to the number of times they had participated in the course. This year’s Students Training Course, however, grouped students solely based on their school year, in hopes that as many students as possible could attend the course and foster new friendships with one another. The students spent one week living together in one of six dormitories according to their sex and school year.

Realizing the Importance of Filial Piety

Among the sophomore participants, there were many who were being introduced to the teachings for the first time. Lectures were supplemented with worksheets covering the fundamental teachings for the students’ reference, and service practices included explanations of the meaning of the Mikagura-uta before they studied the hand movements. A “Paper Puppet Theater” workshop had students act out stories of early followers with paper puppets. There was also an activity called “Run! Laugh! Unity of Mind!”

One student who was listening particularly intently to the lectures was Rikako Tejima from Tanjitsu Branch Church. In early July, her home town in the northern part of Kyushu was struck by heavy storms. She said, “I wanted my hometown to recover as soon as possible, so I decided to return to Jiba to attend the Students Training Course.” After hearing one of the lectures, Ms. Tejima said: “The part explaining that ‘Oyasama is always by our side’ was most memorable. Even though my hometown is continually facing hardships, the moment I heard this I felt an unexplainable sense of ease,” she said with a smile. 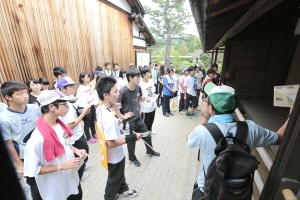 The juniors who are 17 and older were able to attend the Besseki lectures during the training course. Also, a new activity for juniors was added this year, called the “Historical Site Tour.” On the tour, students were able to visit Oyasama’s Birthplace, the Oyamato Shrine, and the historical buildings preserved near Church Headquarters to experience the journey that early followers went through, thereby cultivating a closer relationship to Oyasama. The students walked a total of nine kilometers (5.6 miles) to visit all three sites.

All the juniors came together for “Seventeens in Yoki Hall,” also a new event. The goal of this event was two-fold: to promote friendship among all the juniors attending the training course and help the students realize the importance of filial piety. For the first half, students, counselors, and instructors came up with songs and games for all to join in. The second half of the event focused on the theme of “filial piety,” with two counselors giving faith experience speeches and the former chairman of the Students Advisory Committee, Rev. Masuhiko Yoshikawa, wrapping up with a lecture. Kyoichi Yano, a first-generation follower from Konotomi Branch Church, said: “Until now I had always been rebellious towards my parents, but through this training course, I learned the importance of an open and receptive mind. From here on forward, I hope that I can show more appreciation to my parents.”

Among the seniors, there were many who were already attending the Besseki lectures or who were already Yoboku. Along with studying the teachings and learning about how high school students can perform salvation work, the senior students diligently practiced the hand movements for the Twelve Songs during the training course.

During the lecture portion, students were given hypothetical situations involving common worries that high school students face and discussed different approaches to resolving the situations within their groups while exploring ways that they as individuals could perform salvation work. One situation, for example, was: “After transferring to a new school, Student A had trouble making friends, and wasn’t able to enjoy his new school life.” In response, students came up with suggestions like “try to join a club or sports team,” or, “actively talk to classmates.” 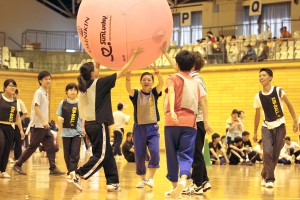 Bringing all the senior students together, a “Heartful Interaction” was held, incorporating the fast-growing game of Kin-Ball. Riku Fujimiya from Oita Branch Church commented on her experience as follows: “Working together as a team to hit and receive the ball really made me feel a sense of unity with everyone and helped us become closer as a group.”

During Group Time held on the 13th, the seniors talked about their group goals leading up to the practice service. After establishing their goals, some examples being ― “Concentrate on not mistaking any hand movements,” “Perform with a spirited mind,” and “Stay focused while performing the service” ― students were asked to keep them in mind when taking part in the practice service that was conducted on the following day.

The practice service was held with the entire senior class in the auditorium of the East-Right Wing 1 Oyasato-yakata building-complex. As the culmination of the Students Training Course, seniors danced the Twelve Songs together. Tomoyo Niimura, a Yoboku from Mishima Branch Church, had administered the Sazuke to her fellow groupmate who had been suffering from lower back pain and had to get around in a wheelchair throughout the training course. When administering the Sazuke, Ms. Niimura prayed for her groupmate’s pain to subside even just a little, and throughout the course, she witnessed her groupmate’s condition steadily improve. On the day of the practice service, her groupmate was even able to perform the hand movements with the rest of her group. Ms. Niimura spoke about this eperience after the service, saying: “I was so glad that we were able to perform the service all together. I intend to continue practicing the hand movements when I go home.”

At the closing ceremony held on the last day, Rev. Zensuke Nakata, the Director-in-Chief of Administrative Affairs, took the podium to deliver the final address: “Even when you face hardships in your future, it’s a great thing that you always have friends to lean on and a place to find comfort in,” he said. “I hope that you engrave this past week’s experience in your minds, so that when you return home you will maintain a mind of gratitude for those around you, as you go about your daily lives.”

After the closing ceremony, the participants, with their completion certificates in hand, made their way home, promising one another to meet again in Jiba.