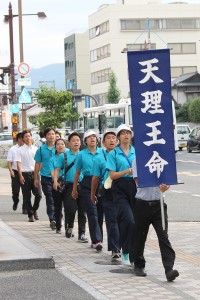 The 2017 Oyasato Seminar, sponsored by Tenrikyo Overseas Department, took place between July 10 and 25 for English-, Chinese-, and Portuguese-speakers and between August 3 and 15 for Korean-speakers, drawing a total of 56 participants from Brazil, Canada, Germany, South Korea, Taiwan, and the U.S.A. The participants spent about two weeks in and around Jiba seeking the path and sowing seeds of sincerity.

The seminar is an annual summer event originally launched in 1984 to help nurture successors of the path, mainly high-school-age students living in overseas countries, by providing an opportunity to gather in Jiba and learn and implement Oyasama’s teachings.

At the opening ceremony on July 10, Overseas Department Vice Head Hinao Nagao gave an opening speech, in which he said: “Each and every one of you was drawn to the Home of the Parent through Oyasama’s profound intention. I hope that you will work hard to sow good seeds and complete the seminar by helping one another.”

In the first half of the program, students in English Course I as well as the Chinese and Portuguese courses attended lectures covering the basic teachings and practice sessions for the dance and the musical instruments for the service. Jillian Ayame Litke, an English Course I student who belongs to Central Fresno Church in the United States, practiced the kokyu (a bowed banjo-like instrument) for the first time. She said: “It was hard to move my wrist correctly. I’ll keep practicing the kokyu so that I can play it at the monthly services of my church.”

On July 16, students in the three courses also crossed the Jusan Pass. Jared Satoru Yuge, another English Course I student, who belongs to Heritage Church in the United States, felt a bit uneasy about whether he could cross the pass because he had injured his ankle last year. A staff member administered the Sazuke to him, and his course members joined in praying for him. After successfully walking back to Jiba, Jared said: “I could complete the full distance thanks to the blessings of God the Parent and the support from my fellow coursemates. Also, when I thought of the hardships our predecessors went through, great courage welled up within me.” 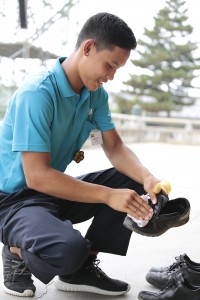 In the meantime, students of English Course III—which is designed for those who previously completed Course I in Jiba and Course II in their respective regions—spent five days with members of the Precincts Section of Church Headquarters standing guard in 24-hour shifts and engaging in hinokishin activities on a day shift. Among them was Akari Shimizu, who belongs to Köln Fellowship in Germany. She commented, “Although the task of standing guard at night was really tough, I was motivated by the smiles of people returning to Jiba.”

In the second half of the seminar, students in English Course III, English Course I, the Portuguese Course, and the Chinese Course went to Aichi, Ishikawa, Okayama, and Hyogo prefectures, respectively, for their mission caravans. Aline Mantuani Mitiue, a Portuguese Course student from Brazil, had come to know the teachings through attending Japanese language lessons provided by the Mission Headquarters in Brazil. Having received the truth of the Sazuke while in Jiba, she conveyed the teachings and administered the Sazuke to a woman in her 60s, who was suffering from lower back pain, during the mission caravan in Okayama. She said: “Through engaging in missionary work, I felt increasingly grateful for my family and other people around me. I’ll continue my effort to sprinkle the fragrance of the teachings after going back to Brazil so that I will not miss any opportunities to administer the Sazuke to people who are suffering from illnesses.”

Casey Toshiki Oiki, an English Course III student who belongs to Capitol Church in the United States, was another participant who had a chance to use the Sazuke. He administered the Sazuke to a man in his 70s during the mission caravan in Aichi. He said: “Although my hands trembled with nerves at first, I was touched when the man said afterward: ‘Thank you. I feel much better.’ I would like to make use of this experience to help my father who serves as head minister of my church.”