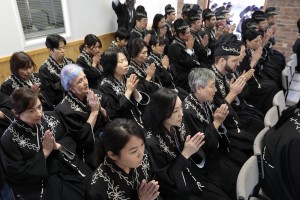 On July 9, the Shinbashira, his wife, and Successor-Designate Daisuke Nakayama attended the service commemorating the 20th anniversary of Tenrikyo Oceania Centre (TOC), located in Brisbane, Australia. The commemorative service attracted some 160 people not only from the three largest cities in Australia—Brisbane, Melbourne, and Sydney—but also from the New Zealand city of Auckland, which is approximately 2,300 kilometers (1,429 mi.) away.

The path in Oceania in the postwar period can be traced back to the year 1969, when two students of the path were sent to Australia as part of the commemorative projects for the 50th anniversary of Tenrikyo Young Menʼs Association. In 1978, the federal government granted permission for Tenrikyo followers in Australia to carry out missionary activities, and three years later a mission station was set up under Shikishima Grand Church—this became Melbourne Shinyu Church in 1989 as the first Tenrikyo church in Oceania.

After the 110th Anniversary of Oyasama, Tenrikyo Oceania Centre was established in Brisbane on December 14, 1997, to keep pace with the growth of the path in Oceania. In the same year, the Young Menʼs Association announced its “Australian mission” as part of its 80th anniversary commemorative projects, and in the following year the construction of the “Tenri Youth Hall” on the premises of TOC was completed as a base from which to promote its missionary activities in Australia.

Over the years since then, Tenrikyo Young Menʼs Association has organized its “Australia Study Tour” 13 times and sent its members there to nurture and train them so that they would engage in the overseas mission in the future. There are at present one church, nine mission stations, 40 lay ministers (kyoto), 160 Yoboku, and 251 followers in the region. 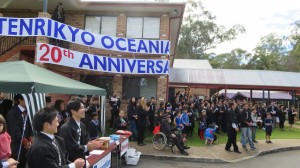 On the morning of the 9th, the Shinbashira, his wife, and Successor-Designate Daisuke Nakayama arrived at TOC at around 10:00 a.m., one hour before the service commenced. Followers welcomed them in a joyous atmosphere by waving flags of Australia and New Zealand.

At 11:00 a.m., the guests of honor entered the worship hall. After paying respects to God the Parent, Oyasama, and the Mitama-sama in unison with the Shinbashira, Rev. Tomoharu Matsui, head of TOC, began the proceedings by offering a service prayer in English, expressing his joy and appreciation for God the Parentʼs blessings that had guided the center since its establishment.

The Shinbashira then took the podium to deliver his address. He first touched upon God the Parentʼs intention to save all people in the world and guide them to the Joyous Life as well as Oyasamaʼs 50-year Divine Model of the Joyous Life, through which She conveyed the intention of God the Parent to us human beings.

The Shinbashira then pointed out, “The most basic teaching that all of us who follow this path must keep in mind is the teaching that the body is a thing lent by God, a thing borrowed, and that the mind alone is the truth of oneself.” He went on to say, “When we think of God’s profound intention in giving us the freedom of mind for the express purpose of enabling us to savor the delight of living a life filled with joy, we will naturally be motivated to use both the body, which is on loan from God, and the mind, which is given to us as our own, in such a way as to ensure that we can live the Joyous Life.”

He then mentioned: “Your church affiliations may differ from one another. However, the fact that the Parent of the teachings is God the Parent and Oyasama applies to all of you and, in addition, you all share the same ultimate goal toward which you are working. From this perspective, those of you who live in the same region and share the same faith would do well to help one another if you are each to progress further and further in your spiritual growth.” Furthermore, the Shinbashira explained the significance of Tenrikyo centers such as TOC, saying, “A mission center does not merely serve as a regional office of Church Headquarters but is intended to play a core role in helping all of you to work together, going beyond differences in church affiliation, in order to be blessed with the further growth of the path in the region.”

He concluded his remarks by saying, “May I ask all of you to continue to work spiritedly for the growth of the path in Oceania with your minds in unison by using this center as a mission facility and as a place where you can help one another and work together to nurture spiritual growth.”

The seated service then took place with the Shinbashira as the core, followed by the performance of the Dance with Hand Movements, while the congregation joined in singing the Mikagura-uta, The Songs for the Service. The cheerful voices of followers and the joyous sounds of the musical instruments resonated throughout the premises of TOC.

In the run-up to the anniversary service, TOC organized service practice sessions for the dance and musical instruments for the service on the first, second, and third Sunday. In addition, on the fourth Sunday from 9:00 a.m. Australian Eastern Standard Time, followers in Oceania performed the dance to the Eight Verses of the Yorozuyo and the Twelve Songs in their respective districts and regions to help ensure that they could perform the 20th anniversary service at TOC in unity of mind.

After the service, group photographs of all present were taken, and a commemorative reception was then held in Tenri Youth Hall. Reflecting upon the past and looking to the future, Rev. Matsui spoke on behalf of all followers of the path in Oceania, saying: “All of us followers in Oceania shared a common goal as we worked to prepare for the 20th anniversary of TOC by doing what we could under the theme ʻUnity of Mind,ʼ seeing this work as something that concerned us directly. We intend to continue our utmost efforts so that those of us in Oceania can help one another as true brothers and sisters and pass on our joy of faith to the younger generation.”

During their trip, the Shinbashira, his wife, and Successor-Designate Daisuke Nakayama first visited Melbourne Shinyu Church (headed by Head Minister Yoko Fukuda) and Joyous-Ohko Fellowship (headed by Mr. Yosuke Furukawa) on the 7th before flying 1,400 kilometers (870 mi.) to Brisbane to visit Kutomi Brisbane Fellowship (headed by Mr. Michiharu Mori) on the 8th and attend the commemorative service at TOC on the 9th.