On the afternoon of February 26, Tenri University’s Oyasato Institute for the Study of Religion held the sixth Mission Forum with the support of Tenrikyo Overseas Department. The forum provides opportunities to reflect on the history of the overseas mission and to think about how Tenrikyo should conduct its activities if they are to be sustainable into the future. Entitled “Various Activities in the Congo Mission,” the latest session focused on the Republic of the Congo, which reaches the 50-year mark this year since Tenrikyo’s first arrival in 1960. In the forum, presentations were given by three individuals who have engaged in a variety of activities in the Congo. 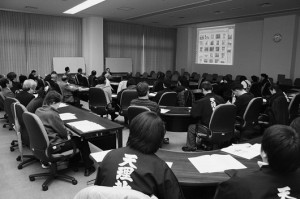 Mr. Tetsuya Tani, 65, former head of Loukakou Mission Station, first took the podium for his presentation entitled “Missionary Activities in Remote Areas of the Congo.” After sharing with the audience his missionary experience in the Congo—where he served for three and half years as a staff member of Tenrikyo Overseas Mission Department—he also provided detailed explanations about the food conditions and social structure of the country.

The next speaker, Ms. Yuriko Yanase, 62, spoke on the topic of “Through My Experience as a Nurse.” She talked about her own experience in interacting with many people in the Congo while providing medical care as a member of the 10th session of Ikoi-no-Ie Hospital’s medical corps, which stayed there for a year starting in 1971.

The last presentation, entitled “Meeting the Needs of the Local Community: Report on Activities at Congo Brazzaville Church from the Year 2000,” was given by Mr. Yomei Mori, researcher at Oyasato Institute for the Study of Religion. After describing the doctrinal seminars and some cultural activities organized at the church, he went on to speak about childcare and other activities conducted at Tenrikyo General Education Center, which was built within the church grounds two years ago. “These activities, seen as Tenrikyo’s social contributions following Ikoi-no-Ie Hospital’s medical corps, are the center of local people’s hopes. In the future, hopefully they will have a significant impact on the missionary work,” he said.

The closing remarks were delivered by Overseas Department Vice Head Noriaki Nagao, who said: “The path in the Congo seems to be about to bloom despite the fact that once it almost faced failure due to a civil war. We would like to promote various activities ever more vigorously in unison with the local followers.”