545 College Students Nurture Their Minds in the Students Training Course

The College Division of the Students Training Course was held in the Home of the Parent from March 3 through 9 under the theme “The Shining Power of Faith: Inquiring into the Origin and Pioneering the Future Path.” Through this weeklong training course—which included lectures, the practice of the dance and musical instruments for the service, missionary work, hinokishin activities, and group discussions—the students learned the teachings, reflected upon their minds, and shared their faith experiences with their fellow participants.

A total of 545 university, junior college, graduate school, and technical school students assembled from various parts of the country to participate in the course. The participants were divided into different groups, which belonged to one or another of five houses. First-time participants and non-first-time participants were put in different houses. The course was supported by a total of 295 staff members, including a director and a vice director for each house, a male and a female counselor for every group, coordinators, and general affairs staff members.

At the opening ceremony held on March 3, Honbu-in Motoyoshi Tomimatsu encouraged the students in his opening address, saying: “I believe that God the Parent and Oyasama have prepared different messages for each of you. I hope that you will be able to grasp and take in the message given to you by proactively engaging in the course programs.”

After the first half of the course—which involved lectures, the practice of the dance and musical instruments for the service, and group discussions—the students went on to engage in missionary work on March 7. The missionary work, which was the main event in the entire course, was conducted in Osaka and Nara, as has been the case every year, as well as in Kyoto. A total of 110 students belonging to Isami House—one of the course’s five houses—went to downtown locations in Kyoto such as the areas in front of Hankyu Kawaramachi train station and Keihan Gion Shijo train station to sing the Eight Verses of the Yorozuyo as well as to give roadside speeches. Since it was Sunday, those places were packed with tourists as well as families and young people enjoying shopping. Some of the students passionately delivered their speeches while some others were moved to tears as they became emotional while giving their speeches. Kokoro Oishi, 22, who had lost her father because of cancer at the end of last year, later shared her feelings: “In a lecture we heard during the first half of the course, the lecturer said that we can always find a seed of joy no matter how challenging our present situation may be. I am sure that it will take some time for me to accept the fact that my father passed away. But the lecturer’s message led me to realize that what is important is to keep trying to find joy. And when I talked about all my emotions in my roadside speech, I found that my mind became clear.” 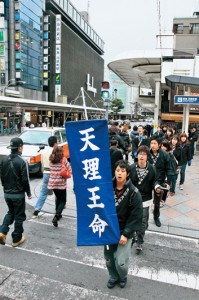 On March 8, the participants had a program where they performed the Twelve Songs, which was the first of its kind in the College Division of the Students Training Course’s programs. The students fervently sang the Twelve Songs while dancing in unity of mind. This program was born out of the intention to convey to students the importance of performing the service as well as to encourage more and more students to connect with their churches after attending the course. In preparing for the program, students in each house practiced the service dance every night so as to help those who had not had many chances to practice the service dance before. Also, on the night before the performance of the Twelve Songs, each group had a discussion in which they shared their thoughts on the importance of the service and thereby set their goals for performing the Twelve Songs. In addition to these activities, some of the participants independently practiced the service dance. Some went to join the service dance practice conducted at the Foundress’ Sanctuary after the morning service with their group members while others conducted a practice service in their own houses. Katsuya Kugai, 21, shared his experiences about the Twelve Songs performance: “Our group’s goal was to perform the Twelve Songs to express our gratitude in unity of mind. When I was performing the Twelve Songs, I thought about the people at my church, who warmly welcome me whenever I visit there, as well as my family members, who have passed on the faith to me. I would like to become a Yoboku who, like my parents and my brothers, works hard on the tasks of the church.”