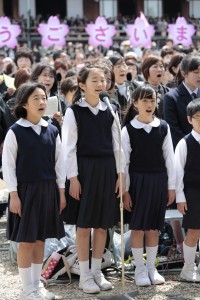 In commemoration of the everliving Oyasama’s 219th birthday, the Oyasama Birth Celebration Service was conducted on April 18 in the Main Sanctuary and Foundress’ Sanctuary at Tenrikyo Church Headquarters with the Shinbashira presiding as chief officiant. Approximately 60,000 followers returned from across Japan and overseas for the occasion.

Among them was Celso Akassaka, who took a 35-hour flight from Brazil. He had made a promise with his wife just before she passed away 15 years ago that he would return to Jiba for the Grand Services and the Oyasama Birth Celebration Service every year. He said: “I feel like I get a warm hug from Oyasama whenever I come into the Foundress’ Sanctuary. I would like to devote myself to nurturing young people for the further growth of the path in Brazil.”

Shortly after 9:30 a.m., the Shinbashira and other Service performers left the Staff Quarters. After they finished paying their respects at the Foundress’ Sanctuary, a band comprising students from Tenrikyo high schools played “Oyasama’s Birthday Celebration Song” in the Inner Courtyard.

In the Service prayer, the Shinbashira said, “We Service performers as well as church head ministers and other Yoboku will take deeply to heart the path of Oyasama’s Divine Model, set our sights on making repayment for the blessings we receive, and exert our utmost sincerity in the cause of single-hearted salvation.”

The prayer was followed by the joyous performance of the Kagura Service, after which the Shinbashira, his wife, and Successor-Designate Daisuke Nakayama proceeded to the Foundress’ Sanctuary to serve a meal to the everliving Oyasama. In the meantime, the Dance with Hand Movements was performed in the Main Sanctuary. Worshipers joined in singing the songs for the Service with their minds in unison.

The sermon was then delivered by Honbu-in Yoshiharu Nakayama. After recounting a scene from Oyasama’s final hardship of imprisonment, he pointed out: “It is due to the Divine Model of Oyasama that we children of the path can take to heart the importance of the Service. Without Her Divine Model, we would not have learned the true meaning of the Service.”

He also stressed that Oyasama was never swayed by the surrounding circumstances and always filled with compassion for people around Her. He then quoted from Instruction Three, “Salvation work begins with paying attention to those around you,” and said, “Paying attention to others is not only the first step in working for their salvation, but also a way of correcting the orientation of our mind when faced with a difficult situation, thereby taking the first step toward our own salvation.”

Referring to how Oyasama was high-spirited under any circumstances, Rev. Nakayama concluded his sermon by saying, “Keeping in mind the Divine Model of Oyasama, let us walk the path of making repayment for the blessings in high spirits.”

After the sermon, the Shinbashira returned to the Foundress’ Sanctuary, where he read a prayer to Oyasama to extend words of celebration and express his resolve to work hard on the tasks of single-hearted salvation in unison with all the followers of the path. 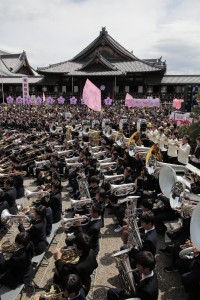 The “Joyous Chorus”—an annual event co-sponsored by the Women’s Association, the Young Men’s Association, and the Boys and Girls Association—then took place in the Inner Courtyard. Blessed with pleasant spring weather, the assembled followers joined together in singing several choral pieces, including “Happy Birthday, Oyasama.”

Between the 17th and 19th, a total of 1,227 people attended the Besseki lectures, of whom 258 were first-timers, and 116 followers, including 18 people from overseas, received the truth of the Sazuke, the Divine Grant.