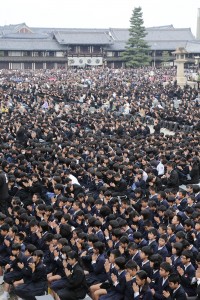 On October 26, the Autumn Grand Service commemorating the Teaching’s day of origin was performed in the Main Sanctuary of Tenrikyo Church Headquarters with the Shinbashira presiding as chief officiant. This Service commemorates October 26, 1838, the day when God the Parent received Oyasama as the Shrine of God in order to “save all humankind.”

From early morning, followers began assembling in the Sanctuary precincts under clear autumn skies. Approximately 70,000 Yoboku and followers attended the Service, filling not only the four worship halls surrounding Jiba for the Kanrodai but also the 6,200 benches that had been set up in the Inner Courtyard and other parts of the precincts. This year, being the year when Tenrikyo observed the 130th Anniversary of Oyasama, an especially large number of pilgrimage groups from overseas are returning to Jiba in adoration of the everliving Oyasama. On this day, as well, the Service was attended by pilgrims from 23 countries and overseas regions including Brazil, the United States, Hawaii, Laos, Paraguay, and Peru.

The Service commenced at 8:00 a.m., being the hour at which Oyasama was settled as the Shrine of God on the Teaching’s day of origin.

In the Service prayer, the Shinbashira offered gratitude for God the Parent’s unchanging parental love in guiding people to the Joyous Life. He went on to say, “All of us Service performers as well as church head ministers and other Yoboku will take to heart Your profound intention contained in the Teaching’s day of origin with a fresh mind, as we are determined to advance the path of world salvation in unity of mind and exert our utmost in raising and nurturing the successors of the path.” 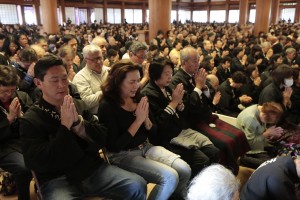 Next, the Kagura Service and the Dance with Hand Movements were joyously performed while the followers spiritedly joined in singing the songs that accompany the Service.

The Shinbashira then took the podium to deliver the sermon, in which he focused on the basic teachings of “a thing lent, a thing borrowed” and the “eight dusts of the mind” and encouraged all followers to strive for further progress in both the growth of the path and their own spiritual development.

Explaining that “the founding of the Teaching also marked the beginning of the path of Oyasama’s Divine Model,” the Shinbashira emphasized that the Divine Model, which demonstrates how to follow the path of single-hearted salvation in order to save all humankind, is indeed a model to be actually emulated and implemented by all followers of the path. “We can only call ourselves ‘followers of the path,’” he said, “when we try to emulate the Divine Model and implement the teachings.”

Briefly reviewing some of the events in the early history of the path, he said that Oyasama opened the Divine Model by falling to the depths of poverty and that, eventually, many people came to ask Her to cure illnesses, one of whom was Izo Iburi, an early follower who dedicated his efforts of hinokishin to the construction of the Place for the Service in order to make repayment to God for healing his wife of post-partum complications. “Anyone blessed with being healed of a serious illness,” said the Shinbashira, “would feel profoundly grateful for the blessing of God the Parent, and the sense of joy experienced would naturally lead the person to make repayment for the blessing. An experience like that would also allow people to become aware of how fortunate it is to live in good health, something that until then they may have taken for granted. Moreover, falling ill often gives people an opportunity to realize for the first time that the body is something that they do not have control over. They can then take to heart the teaching of ‘a thing lent, a thing borrowed.’”

The Shinbashira went on to say that Oyasama explained the Parent’s intention to those who came to the Residence out of a pure desire to be saved or to have their family members be saved, and She showed them instances of wondrous salvation and thereby sought to help them understand the divine intention. “In this manner,” he continued, “She guided and nurtured them step by step so that they might grow into Yoboku who would work to build the world of the Joyous Life.”

Reminding the listeners that it is thanks to the great and exquisite providence within the body that we are able to use the body as we do, he went on to say: “Hinokishin is not merely a way to make repayment for the blessings of salvation we have received; rather, it is an act of expressing gratitude and making repayment for the constant and boundless providence that enables us to be alive day after day. Hinokishin is an outpouring of our unceasing joy.” Adding that “hinokishin that is motivated solely by gratitude can become ‘fertilizer,’ which fosters the growth of seeds of sincerity,” he encouraged the listeners to make a point of taking every opportunity to do hinokishin.

Turning to the teaching of “a thing lent, a thing borrowed,” he said, “If we ponder deeply over the truth of ‘a thing lent, a thing borrowed,’ we will realize how profound and far-reaching this teaching is.” He then stressed that our use of the body needs to be in accord with the intention of God the Parent, who is its Lender, and underscored the importance of making an effort to seek God’s intention.

Pointing out that our illnesses have their sources in our misuses of the mind, which are likened to dust in the Scriptures, he said: “If we come down with a disorder of the body, we can accept it as alerting us to the need to correct our use of the mind. We can reflect on the way we have used the mind and lived our lives and work to sweep our heart clean, so that we can change the orientation of the mind to ensure that it is in accord with the intention of God the Parent. That is how we can accept our illness.”

Next, the Shinbashira touched on the standard explanations of the eight dusts and of the ten aspects of God’s complete providence, while emphasizing that “what is really vital is that these teachings firmly settle in people’s minds and be actually implemented.”

Explaining that “the teaching of the eight dusts deals with our use of the mind, which is the most intimate aspect of our lives,” he went on to say: “Since this teaching concerns the way we use the mind in daily life, we need to actually apply it to the way we live, speak, and act. At the end of each day, we can, for example, reflect on our words and actions and, as we begin another day, we can use this teaching to prepare our mind for the new day. If we make a conscious effort to apply this teaching to our lives in this way, it will become second-nature.”

The Shinbashira then said: “Having completed the anniversary of Oyasama, we are now at a stage where we need to take a fresh look at where we stand. Also, building on our pre-anniversary activities, we need to strive for further progress in both the growth of the path and our own spiritual development as we continue to work toward the realization of the world of the Joyous Life, which is the original purpose of creation.”

The Shinbashira went on to explain that words and actions befitting followers of the path will not only fill our own daily lives with joy but also help us sprinkle the fragrance of the path on people around us in an effortless manner, in addition to helping people in our local communities to familiarize themselves with and put their trust in our churches, which are to serve as models of the Joyous Life. “Above all,” he said, “those words and actions will help create an atmosphere worthy of the path in which true faith is more likely to arise and take root in the minds and hearts of the children of not only church head ministers but also Yoboku and followers.” He emphasized that a joyous and spirited atmosphere created by parents and other adults, as well as examples set by Yoboku, will help children grow into reliable Yoboku capable of carrying the path forward in the future and participating in building the Joyous Life World.

He brought the sermon to a close by saying: “I hope that you will perceive my intention in making these remarks and will spiritedly move forward in a steady manner toward the goal we are all working to accomplish.”