On May 17, Tenrikyo Mission Center in Mexico conducted its 30th anniversary service in the presence of the Shinbashira, his wife, and Successor-Designate Daisuke Nakayama with the participation of approximately 380 people. The guests of honor from Japan also visited two churches and a mission station in Mexico on May 15 and 16.
In 1979, the Mission Office in Mexico was opened under the supervision of the Mission Headquarters in America and in 1985 developed into the Mission Center in Mexico. The center has been working to serve as a dependable guide for local followers to carry out their efforts to spread the fragrance of the teachings and help others be saved. At present, there are two churches and nine mission stations as well as about 300 Yoboku in Mexico according to the Overseas Department.
In preparation for the 30th anniversary, the mission center conducted its activities based on the slogan “Let’s spread the joy and excitement of the faith throughout Mexico and the world.” The mission center sought to increase its effort to nurture and develop local followers by setting the following three activity guidelines: “Bring the service performance to perfection,” “Implement salvation work,” and “Encourage close cooperation among the three associations (namely, the Women’s Association, the Young Men’s Association, and the Boys and Girls Association) and enhance their activities.”
Shortly after 9:00 a.m. on the day of the service, followers were making a long line to wait for registration. Rejoicing in their reunion, they exchanged greetings with one another. At 10:00 a.m., the Shinbashira, his wife, and Successor-Designate Daisuke Nakayama entered the sanctuary to the accompaniment of gagaku music. The congregation paid their respects to God the Parent, Oyasama, and the Mitama-sama in unison with the Shinbashira. 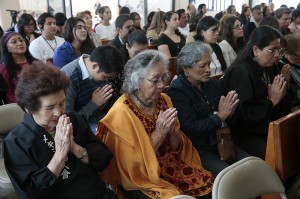 Mission Center Head Wakio Watanabe read the service prayer in Spanish and Japanese, expressing appreciation for God the Parent’s blessings that had guided the mission center since its founding. He then said: “We have to ensure that the path of world salvation started by Oyasama will be passed down from parents to children as well as from children to grandchildren. We are also determined to dedicate ourselves to the further expansion and development of the path in Mexico.”
Next, the Shinbashira addressed the congregation. After touching on how the mission in Mexico started in 1922 and how the Mission Office developed into the Mission Center, the Shinbashira talked about the roles of the center and the appropriate frame of mind the congregation should have for this season.
He then stated that Tenrikyo’s missionary work is to convey the parental heart of the everliving Oyasama to others and to have them feel God’s blessings and settle in their minds the truth of universal brotherhood. “To make steady, continuous efforts to invite others to follow the path as we do is a universal duty for all of us Yoboku no matter what language we speak or what customs we follow,” said the Shinbashira.
He continued: “We Yoboku and followers are striving to construct the Joyous Life World, which will be actualized when we attain the mind that enables us to remain joyous no matter what we see or hear with a feeling of delight and gratitude for being kept alive by God and live in exact accord with God’s intention. . . . What matters is the orientation of our minds. Single-heartedness with God is crucial as it helps us base our thoughts on Oyasama’s teachings. I would like you to carry out your activities while nurturing your faith based on single-heartedness with God.”
Lastly, in light of the increased efforts being made by the entire Tenrikyo community in the pre-anniversary activities leading up to the 130th Anniversary of Oyasama, the Shinbashira concluded his address by saying, “I hope that the mission center continues to proactively conduct a variety of activities in unity of mind so that the path in Mexico will achieve further development.”
The Shinbashira and his wife led the seated service, which was followed by the Teodori, the Dance with Hand Movements, performed by local church head ministers, mission station heads, Yoboku, and other followers.
After the service performance, Rev. Watanabe delivered words of appreciation to the Shinbashira on behalf of the congregation.

Mexico Chapters of Women’s Association and Young Men’s Association Hold Joint Convention
On May 16, the day before the anniversary, the Mexico chapters of the Women’s Association and the Young Men’s Association held a joint convention in the presence of the Shinbashira, Women’s Association President Harue Nakayama, and Young Men’s Association President Daisuke Nakayama.
In front of the 143 participating members of the associations, the Shinbashira said that Oyasama’s Divine Model should be regarded as their own path. Referring to Oyasama’s anniversaries as junctures to accelerate spiritual growth, he expressed his hope that, during the remaining eight months leading up to the 130th Anniversary, the associations would work hand in hand to conduct their activities so that they could contribute to the spiritual growth of individual members, to the development of the associations, and to the expansion and growth of the path in Mexico.
The president of the Women’s Association then delivered her message, in which she said: “Seeking to realize the Joyous Life World with an awareness of being Yoboku, we should strive to grow into Yoboku who can joyfully and spiritedly walk the path of single-hearted salvation and to nurture those who will shoulder the future path into true Yoboku. That is exactly what brings joy to Oyasama. . . . Let us association members follow the Divine Model with an open mind, advance in the journey of spiritual growth to inch closer to the parental heart of single-hearted salvation, and make an all-out effort until the 130th Anniversary so that we can bring joy to God and Oyasama no matter how small it may be.”
Next, President Daisuke Nakayama took the podium to deliver his message, in which he encouraged the participants by saying: “If we conduct our activities with spiritedness and momentum, God the Parent will surely accept our minds and provide us with any kind of blessing. Let us dedicate our full measure of sincerity to our pre-anniversary activities so that we can be filled with a sense of delight and accomplishment on the day of the anniversary of Oyasama and show Her the results of our efforts and the level of spiritual growth we will have attained.”
On behalf of the participants, Chairman Enrique Montes of the Mexico Chapter of the Young Men’s Association and Chairwoman Yurie Watanabe of the Mexico Chapter of the Women’s Association delivered their pledges in Spanish.