In commemoration of the everliving Oya­sama’s 217th birthday, the Oyasama Birth Celebration Service was conducted on April 18 in the Main Sanctuary and Foundress’ Sanctuary at Tenrikyo Church Headquarters with the Shinbashira presiding as chief officiant. This year—the final year of the “three years, one thousand days” season leading up to the 130th Anniversary of Oyasama—the Service drew approximately 75,000 people from across Japan and overseas. 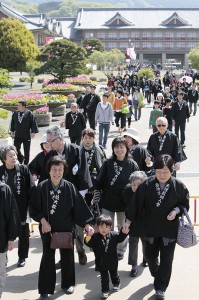 Among them was Isidro Aguilar, who brought 22 people from the Philippines to the Besseki lecture. He said: “I invited people I associate with through work to participate in a pilgrimage I was organizing for the Oyasama Birth Celebration Service because I wanted them to feel close to the everliving Oyasama. After listening to the Besseki lecture, some became interested in applying to Shuyoka to learn more about the teachings. I will continue to convey the teachings of the path to as many people as possible.”

Noriko Kainuma, who lives in Hokkaido, brought a woman in her 60s to her first Besseki lecture. This woman had undergone three operations—for colorectal cancer, bile duct cancer, and lung cancer—in a mere three years. Praying for the salvation of this woman, Noriko had started to perform the Twelve Songs every day at the beginning of this year. Surprisingly, 10 days before the Oyasama Birth Celebration Service, Noriko heard that the woman’s tumor marker had returned to normal. “When I came to the Foundress’ Sanctuary and prayed, I couldn’t stop crying with my heart filled with deep emotion. She tells me that she wants to return to Jiba again. I would like to continue to provide sincere care and guidance for her in the hope that we can work together for the salvation of others,” Noriko said.

Shortly after 9:30 a.m., the Shinbashira and other Service performers left the Staff Quarters. After they finished paying their respects at the Foundress’ Sanctuary, the band played “Oyasama’s Birthday Celebration Song” in the Inner Courtyard.

After reaching the Main Sanctuary, the Shinbashira ascended the dais to deliver the Service prayer, in which he said: “On this day, we Service performers as well as church head ministers and other Yoboku will take deeply to heart the path of the Divine Model that Oyasama demonstrated for us by living each day joyfully and spiritedly even in the midst of difficulties and hardships. We will exert our utmost sincerity by proactively living life based on the teachings and devote ourselves spiritedly to responding to Your blessings in unity of mind.” 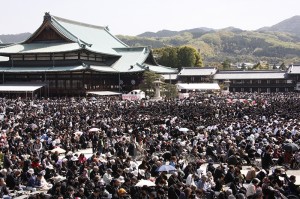 Following the prayer, the Kagura Service and the Dance with Hand Movements were joyously performed. Blessed with early-summer-like sunny weather, worshipers joined together in singing the songs for the Service with their minds in unison. After the Kagura Service, the Shinbashira, his wife, and Successor-Designate Daisuke Nakayama proceeded to the Foundress’ Sanctuary to serve a meal to Oya­sama.

After the conclusion of the Dance with Hand Movements, Honbu-in Taketo Hashimoto took the podium to deliver a sermon. He first explained Oyasama’s roles as the Shrine of God and the Parent of the Divine Model. He also spoke on the truth that Oyasama’s workings remain unchanged even after Her withdrawal from physical life, referring to it as an invaluable spiritual support for people following the path of single-hearted salvation.

He further pointed out that cultivating the mind of saving others is of vital importance in order to realize the Joyous Life World. “An accumulation of altruistic acts of saving others can help correct the orientation of the minds of people around us, thereby leading to the construction of the Joyous Life World where God and human beings live in harmonious union,” he said. 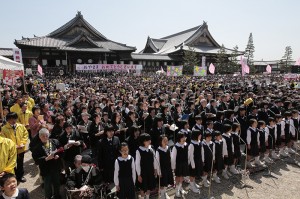 After the sermon, the Shinbashira returned to the Foundress’ Sanctuary, where he read a prayer to Oyasama to extend words of celebration and express his resolve to tirelessly work for the path of single-hearted salvation.

The “Joyous Chorus”—an annual event co-sponsored by the Women’s Association, the Young Men’s Association, and the Boys and Girls Association—then took place in the Inner Courtyard. Thousands of followers joined together in singing several choral pieces, including the “Oyasama Birth Cele­bration Song” and “Happy Birthday, Oyasama.”