On March 26, the Monthly Service was performed in the Main Sanctuary with the Shinbashira presiding as chief officiant. In the Service prayer, the Shinbashira expressed appreciation for God the Parent’s warm parental heart and boundless blessings. He said: “All of us Yoboku including church head ministers are determined to earnestly engage in salvation work by doing whatever we can do. Through implementing salvation work befitting the season for finishing up the pre-anniversary activities, we will take further steps in our spiritual growth that will allow us to bring joy to Oyasama with our minds in unison.” 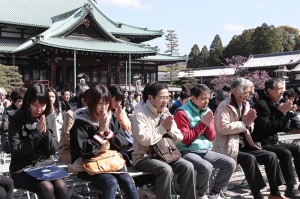 Following the prayer, the Kagura Service and the Dance with Hand Movements were joyously performed. Blessed with the warm spring weather, the worshipers joined together in singing the Songs for the Service in unity of mind.

Honbu-in Susumu Haruno then took the podium to deliver the sermon. He began by referring to the core of the pre-anniversary activities indicated in Instruction Three, saying, “It is important for all of us Yoboku without exception to unite our minds and strive to focus on and engage in salvation work.”

He told the story of a certain church head minister’s salvation work, saying that when he first heard the story a few years ago, he was not confident about emulating that head minister’s salvation work; however, he gradually brought himself to make more efforts to carry out salvation activities. Honbu-in Haruno then told the congregation that God the Parent would surely show them wondrous salvation if they would pay attention to people around them, single-heartedly pray for the salvation of others, and actually engage in salvation work. Referring to The North Wind and the Sun, one of Aesop’s Fables, he said, “It is a sun-like warm heart and gentle words that soften people’s hardened hearts and help unfasten their hearts.” He thus highlighted the importance of doing whatever could be done to implement salvation work during this season, such as reaching out to people who have worries.

He further pointed out the importance of making tireless efforts to reach out to followers who have yet to engage in salvation work. He said that people who belong to the same church should encourage one another and develop close ties with one another. He said, “We should thus help those who have yet to carry out salvation activities become spirited and joyful so that they will come to join us in engaging in the pre-anniversary activities.” He then concluded the sermon by saying, “Throughout the remaining period leading up to the anniversary of Oyasama, let us exert our utmost in unity of mind so as to take full advantage of this season.”

On March 27, the Spring Memorial Service was conducted. Following the Service prayer, the dances to the Eight Verses of the Yorozuyo and the Twelve Songs were performed in the Main Sanctuary. The ceremony then took place in the Memorial Hall, where the Shinbashira read a prayer honoring the virtues of the predecessors who dedicated their efforts and sincerity to the path in accordance with the intention of the Parent.