In the late afternoon of April 18, the Women’s Association organized five lecture meetings in the Home of the Parent in commemoration of the association convention. Drawing a total audience of about 11,500 people, the events were held under the common theme “Nurturing Ourselves and Those around Us into True Yoboku.” 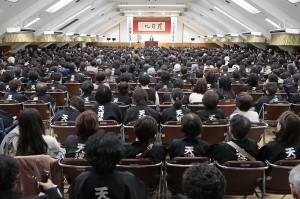 Mrs. Kuniyo Nakamori, chairwoman of Nabari Chapter of the Women’s Association, gave a lecture at one of the venues, the auditorium of East Right Wing 1 of the Oyasato-yakata building-complex, in which simultaneous interpretation was provided in seven languages.

Based on her own experiences, she said: “What we have today is only possible thanks to those who sincerely devoted themselves to the path of joyous acceptance. . . . We have to hand it down to the next generations without clouding the radiance of the path inherited from early followers and our predecessors.”

She reminded the audience that the association president had said at the 2013 association convention that the main focus of the association’s pre-anniversary activities should be placed on nurturing others. Mrs. Nakamori then emphasized: “It is our urgent task to pass down to the next generations the importance and preciousness of the teachings.” After noting that quite a few followers have failed to do so and let their faith end in their generation, she said: “If God wants to use certain people, God will draw them to the faith even by showing them an illness or a problem in their life. What is important is to help them cultivate a sense of faith that enables them to appreciate the difficulties they might face for what they are so that they can understand God’s message embodied therein.”

In conclusion, she said: “I have no doubt that God will accept the sincerity that we dedicate in this season. . . . Oyasama guided and nurtured people around Her along the way while looking forward to the future. I hope that we can nurture those around us into true Yoboku with the same kind of delight in mind.”