College Students Deepen Their Joy of Faith in Jiba

The College Division of the Students Training Course was held at the Home of the Parent from March 3 through 9. The weeklong training course provides participants with opportunities to learn and implement the teachings together with their fellow students, thereby deepening their faith.

A total of 523 university, junior college, graduate school, and technical school students (288 males and 235 females) assembled from various parts of the country to participate in the course. This year’s theme was “Inquire into the Origin and Pave the Way for the Future.” The performance of the Twelve Songs was conducted this year, too, while the main program of the course, namely, sprinkling the fragrance of the teachings, was carried out in Kyoto, Osaka, and Nara.

On March 3, a cold winter day, participants arrived in Jiba and headed for their respective houses. They were divided into different groups, which belonged to one or another of five houses. Groups of first-timers and groups of students who had previously attended the course were put in different houses. Each house had its own director, vice-director, advisers, and staff members who were able to work closely with the students. The course was supported by a total of 280 staff members, including a male and a female counselor for every group as well as the general affairs and nursing staff members.

At the opening ceremony, Honbu-in Motoyoshi Tomimatsu encouraged the students in his address, saying: “I believe that God the Parent and Oyasama have prepared different messages for each of you. I hope that you will be able to grasp the message given to you by proactively engaging in the course activities.” Student Advisory Committee Chairperson Zenkichi Tanaka then delivered his address. He first touched on this year’s theme and stated: “It is due to God the Parent’s profound intention that you were able to participate in the Students Training Course. By implementing the teachings together with your friends while inquiring into the Origin, you will find out God’s intention in having you attend the course.”

On March 4, the course went into full swing. Each day started with the participants attending the morning service at the Main Sanctuary. During the day, they practiced the Service dance as well as the musical instruments for the Service, listened to lectures, and engaged in group workshops, in which they had a chance to share their faith with one another. They also listened to a lecture delivered by Honbu-in Mitsunori Toi, in which he talked about the importance of returning to the day of origin of one’s personal faith.
In the “follow-up discussion,” the participants shared their thoughts on the lectures they had attended during the program. One participant said, “Although I was troubled about my unsuccessful job hunting, all my worries vanished after listening to a lecture delivered by a follower who has been active in society.” Another participant commented, “I now want to learn more about the history of the path so that I can better understand the intentions of our predecessors, who handed down the faith to us.”

On March 7, the participants had a chance to sprinkle the fragrance of the teachings, which was the highlight of the course. On the previous day, after listening to a lecture on missionary work, they had discussions among their groups and prepared manuscripts for roadside speeches. On the following day, despite rainy weather, they gathered at Tenri Station where they listened to Chairperson Tanaka’s words of encouragement before heading for their respective missionary work sites. 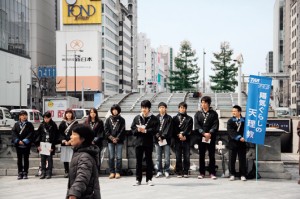 A total of 222 first-timers spread the name of God the Parent and gave roadside speeches in busy downtown areas in Osaka such as Nanba and Nipponbashi. Shortly after 10:30 a.m., it stopped raining and the clear sound of wooden clappers as well as the lively voices of the participants singing the Mikagura-uta resounded in the crowded streets. In their roadside speeches, the participants shared the joy of faith that they had discovered through their own or their family’s illnesses and troubles. Some others shared their experiences during the course where they strengthened the ties with their fellow participants.

Those who had previously attended the course, totaling 191, engaged in door-to-door missionary activity in four locations in Kyoto and Nara.

On March 8, they had an opportunity to perform the Twelve Songs. They had been practicing the Service dance in their spare time in preparation for this day. During the performance, they earnestly sang the Songs for the Service while moving their hands in unison. This performance was followed by the faith experience speech rally, in which five representatives gave speeches, sharing their joy of faith or their future dreams with the audience.

On the last day, the participants attended the closing ceremony, where they received certificates of completion. After the ceremony, they thanked their friends, counselors, and other staff members, pledging one another to be reunited in Jiba, the Home of the Parent.