Concerning the current pre-anniversary activities in the lead-up to the 130th Anniversary of Oyasama, “Visits by Church Headquarters Officials” were previously conducted at all directly supervised churches as well as mission headquarters and mission centers in overseas countries between November 2012 and February 2013 in response to the announcement of Instruction Three. “Visits to All Churches” were then carried out by directly supervised churches between March and June 2014 in order to promote each and every Yoboku’s implementation of salvation work. Prior to entering the final year of the pre-anniversary activities, the present “Visits by Church Headquarters Officials” are being conducted to reaffirm the goals each church has set, grasp the present state of salvation activities, and clarify what should be done in the upcoming final year of the pre-anniversary activities.

Kawaramachi Grand Church
On November 4, Kawaramachi Grand Church held a visit by a Church Headquarters official, which was attended by a total of 423 people including church head ministers as well as their spouses and staff ministers. The grand church was visited by Honbu-in Zensuke Nakata, who emphasized the importance of carrying out the pre-anniversary activities until the very last day of the pre-anniversary season, of which there is only a year and two months remaining. 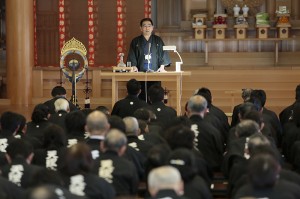 He called on the audience to make unified efforts, saying, “On the day of the 130th Anniversary of Oyasama, I would like all of you to assemble in Jiba while showing the results of your utmost efforts.” Kawaramachi Grand Church Head Minister Yoshitaro Fukaya gave a closing address, followed by a seated service performance with Honbu-in Nakata serving as the core.

Kawaramachi Grand Church set the resolution of having 3,000 first‒time Besseki lecture attendees for its pre-anniversary activities and all Yoboku affiliated to the grand church have been earnestly carrying out salvation activities. Rev. Takafumi Nagao, who serves as head of the grand church’s mission department, said: “At the end of November this year as well as on May and November next year, all churches that have ties to the Shidokai Fellowship (precursor of Kawaramachi Grand Church) will unite their efforts by organizing Besseki pilgrimage groups to Jiba. All of us affiliated to Kawaramachi Grand Church are firmly resolved to spend the year and a few months remaining before the day of Oyasama’s anniversary by working for the salvation of others and providing guidance and care for them, thereby fulfilling the grand church’s resolution.”

Yubari Grand Church
On November 1, Yubari Grand Church held a visit by a Church Headquarters official. Receiving a visit by Honbu-in Tadakazu Nishiura, a total of 160 people including church head ministers as well as their spouses and mission station heads assembled for the visit. The grand church set the resolution of having 10,000 people return to Jiba over the course of the three years. Rev. Atsuo Tomiyama, who is head minister of Kuriyama Branch Church and head of the grand church’s mission department, said: “We are about 3,000 people shy of fulfilling the resolution. In order to receive the blessing of having more people return to Jiba for the first time in this seasonable time, we are determined to continue making proactive efforts to reach out to people around us.”

Ushigome Grand Church
On November 2, the monthly service was performed at Ushigome Grand Church, which was followed by a visit by a Church Headquarters official. Honbu-in Yoshitaro Fukaya gave a lecture for the visit, which was attended by a total of 300 people including church head ministers, their spouses, and mission station heads. As a part of the efforts to provide guidance and care to Yoboku after the “Yoboku Gatherings,” the grand church has organized the Seminars for Yoboku on five occasions. Rev. Akio Suzuki, who is head minister of Zuimei Branch Church and head of the grand church’s missionary department, said: “Participants in the Seminars for Yoboku renewed their resolve to work for the salvation of others through listening to lectures about the Service and participating in group discussions. I would like all Yoboku and followers to visit their respective churches in their daily lives and perform the service, thereby bringing about more instances of wondrous salvation.”