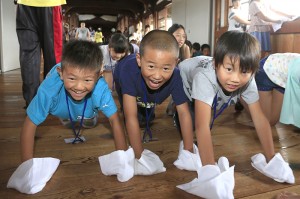 This year’s Children’s Pilgrimage to Jiba was held between July 26 and August 4 under the theme “Filled with Joy! Hinokishin!” Looking forward to this annual summer festival, a total of 238,598 children and adult leaders—approximately 5,000 more than last year—returned to the Home of the Parent from all over Japan and overseas.

The end of the rainy season had brought a summer heat wave across Japan, and the high temperature on the first day of the Children’s Pilgrimage reached 35.9°C (96.6°F). The Boys and Girls Hinokishin Corps members, assigned to tea tents scattered throughout the event venues, began to cheerfully yell, “Have some tea!” while serving ice-cold tea to pilgrimage participants at a variety of activities and attractions, which started at 1:00 p.m. upon the conclusion of the July Monthly Service at Church Headquarters.

The Children’s Pilgrimage was launched under the name “Children’s Hinokishin Pilgrimage to Jiba” in 1954, which was the year after an earth-carrying hinokishin event took place for the construction of the Oyasato-yakata building-complex. The Children’s Hinokishin Pilgrimage was held out of a desire to afford children of the path the opportunity to carry even one basket of earth. Tenrikyo communities across the country, including directly supervised churches and dioceses, thus organized pilgrimage groups to Jiba. Since then, earth-carrying hinokishin has been conducted—as one of the original activities of the event—at various locations such as Tenri High School’s grounds, the site for the westward expansion of the Sanctuary precincts, the construction sites of the Oyasato-yakata building-complex, and so forth. 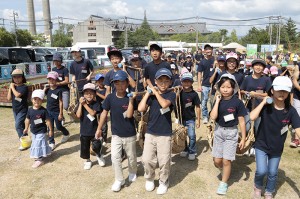 According to documents of Church Headquarters and the Boys and Girls Association—although some records of the early years are undocumented—the number of people who have engaged in earth-carrying hinokishin at the Children’s Pilgrimage since its start is estimated to total more than 4,000,000.

Wakasato Branch Church has organized its pilgrimage group and participated in the hinokishin event every year. This year, after offering their prayers at the Main Sanctuary, a total of 63 people brought by the church spiritedly engaged in the hinokishin in the sweltering heat. Among them were little children, who could not shoulder wooden poles and straw baskets to carry earth. They still joined the hinokishin using small pails. Nobuyuki Kurimoto, leader of the group, said: “Those who used to participate in the event as members of the Boys and Girls Association now take care of children. I will make a conscious effort to help them stay connected with the path.” 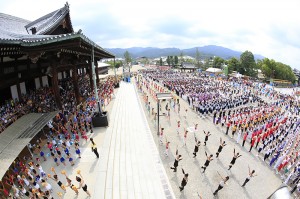 July 27 marked the first day of activities such as the “Morning Service” event and offertory gagaku and fife and drum performances. Tenrikyo’s fife and drum band activities originated from the idea that it would be helpful for children to learn how to work in groups through playing music as a band—the idea was raised after the first Children’s Hinokishin Pilgrimage. In order to promote fife and drum band activities among Tenrikyo communities, a fife-and-drum-band leaders training session was held for the first time in the Home of the Parent in 1955, when most of the participants were beginners in music. At the Children’s Hinokishin Pilgrimage to Jiba in the same year, a total of 1,478 children in 34 bands participated in the offertory performance. In addition, those bands along with Tenri High School Band played a role in leading other pilgrimage groups to the earth-carrying hinokishin venue.

Honai Fife and Drum Band, established in April 1954, is one of those early bands. The current band leader, Isao Nakashima, explained: “The grandchildren of the early adult leaders now participate in the band as band members or staff members. That means that the early adult leaders’ motivations and hopes for fife and drum band activities—namely, that people would be connected to churches through the activities—have been passed down to younger generations.”

At the “Morning Service” event at 8:00 a.m., great numbers of children filled the North, South, and East Worship Halls to attend the performance of the seated service led by the Shinbashira, who played the wooden clappers. After the service, the Shinbashira gave a talk to the participants. He first expressed his pleasure that so many people had returned to Jiba for the pilgrimage, saying, “I am very happy to see all of you in bright spirits.” He then asked the children, “What is the attraction or activity that you are most looking forward to?” Children cheerfully answered the question, saying, for example, “Pools,” “The Oyasato Parade,” and “The Ninja Village.” After listening to those answers with a smile, the Shinbashira went on to talk about why staff members say, “Welcome back,” to those who arrive at the venue for the attractions and activities or at their lodging place: “Do you know why people tell you, ‘Welcome back,’ even though you have not come back to your home? That is because this place, Jiba, is the home of all human beings.” Referring to the Kanrodai, set up at the center of the Main Sanctuary, he said: “The place where the Kanrodai stands is called Jiba. A long, long time ago, when this world had no form—even before the oceans and mountains took shape—God the Parent created human beings here at Jiba. That is why Jiba is the home of all human beings, why we say ‘returning to Jiba’ instead of ‘going to Jiba,’ and why people tell you, ‘Welcome back.’”

The Shinbashira also mentioned that God the Parent, who resides at Jiba, protects human bodies while ensuring that the blessings of nature provide sufficiently for people. He then asked the participants to keep in mind that, whenever they return to Jiba, they should greet God the Parent in bright spirits and say, “Thank you,” for the blessings that enable them to lead their daily lives. 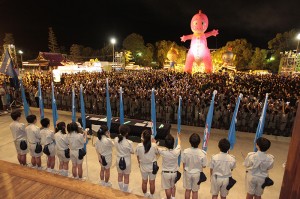 The Shinbashira ended his talk by saying: “God the Parent looks forward to seeing the Joyous Life, where all people in the world live joyously while helping one another. Please enjoy the attractions and activities of the Children’s Pilgrimage. I hope that you make them your opportunities to learn what kind of mind will bring joy to God the Parent and put it into practice after you go home.”

After the Oyasato Parade on the last day of the event, the closing ceremony known as “Finale” took place, where people pledged together to come back again next year.