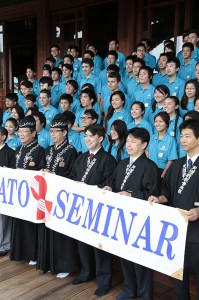 Oyasato Seminar, sponsored by Tenrikyo Overseas Department, was held once again this summer in Jiba. The Chinese and Portuguese courses as well as English Courses I and III began on July 10 with a total of 53 students from seven countries and regions: Brazil, Canada, Hawaii, Hong Kong, Taiwan, the United Kingdom, and the U.S. mainland. The participants spent about two weeks in and around Jiba seeking the path and sowing seeds of sincerity.

The seminar, now in its 30th year, is an annual summer event originally launched in 1984 to help nurture successors of the path, mainly high-school-age students living in overseas countries, by providing an opportunity to learn and implement Oyasama’s teachings in the Home of the Parent. In recent years, there have been an increasing number of Oyasato Seminar alumni who send their children to the seminar. Furthermore, there have been quite a few seminar graduates who later entered Tenrikyo Language Institute (TLI) with the aim of deepening their understanding of the teachings. Those young people who were nurtured in Jiba are now taking a leading role in conducting salvation work and other Tenrikyo activities back in their own countries.

On July 10, students and counselors assembled for the opening ceremony wearing matching blue polo shirts. At the ceremony, Overseas Department Head Yoichiro Miyamori gave an address. He began by touching upon the FIFA World Cup and said: “In order to improve your soccer skills, you first need to learn many techniques and then put them into practice. In the same way, I hope you will first learn the teachings that Oyasama taught us and then make an effort to follow the Divine Model of Oyasama in the Home of the Parent. I would also like you to make it your goal during the seminar to convey the teachings to those who have yet to know the path.” After the ceremony, the participants and staff members went to the Main Sanctuary to conduct a service in which they prayed for a successful seminar. 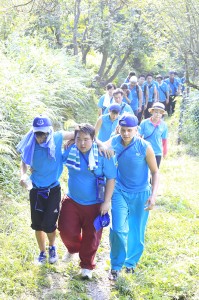 In the first half of the program, students in English Course I as well as the Chinese and Portuguese courses attended lectures covering the basic teachings and practice sessions for the dance and the musical instruments for the service. On the afternoon of the 16th, they crossed the Jusan Pass in the intense summer heat with the temperature exceeding 30°C (86°F). Some helped their fellow students by pushing them from behind when walking uphill.

Wang Shao-qian, an 18-year-old Chinese course student, had injured his heels before coming to Japan. On the day of the Jusan Pass walk, he started walking but had to drop out around the halfway point. “So many people administered the Sazuke to me. Now I’m filled with gratitude. I’d like to return to the seminar next time as a counselor to make repayment for what they did for me,” he said with a bright smile.

In the meantime, students of English Course III, which is designed for those who previously completed Course I in Jiba and Course II in their respective regions, engaged in activities that focused on the implementation of the teachings. For instance, they stood guard at the Main Sanctuary with members of the Precincts Section of Church Headquarters.

In the second half of the program, the students participated in mission caravans in Aichi, Ishikawa, Okayama, or Hyogo, depending on the course they belonged to. The students spread the name of God, gave roadside speeches, and did door-to-door missionary work with local missionaries.

English Course III went to Aichi Prefecture. Lauren Nakagawa, a 17-year-old student from Hawaii, had dislocated her right shoulder several days before the mission caravan. In fact she had repeatedly dislocated the shoulder over the past two years since her original injury. She said: “As staff members administered the Sazuke to me again and again, I felt it eased my pain. I was able to realize the preciousness of the Sazuke in Jiba. That makes me happy, more than anything else. I’d like to share this joy with others.” She enthusiastically coneyed her message to passersby by using gestures with her left hand during her roadside speech. 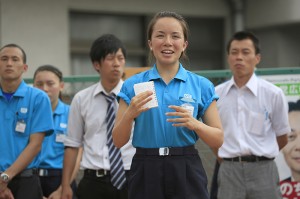 Most students of the Portuguese Course attended the Besseki lectures and became Yoboku before the beginning of the seminar. Among them was Caio Roberto Almeida Teles, an 18-year-old Brazilian student who grew up in a non-Tenrikyo family. He started going to a local church and the Mission Headquarters in Brazil a few years ago with his classmate whose father is a church head minister. He said, “I came to like Tenrikyo very much because I felt the head minister’s warm care and his church’s family-like atmosphere.” He administered the Sazuke to three people during his door-to-door missionary work in Okayama Prefecture. He commented: “Although they might not have understood what I said, they showed me a bright smile after I administered the Sazuke. I think we were able to relate to each other. I’d like to proactively administer the Sazuke even after I return home.”

The Chinese Course as well as English Courses I and III concluded on July 25, and the Portuguese Course finished on July 27. The Korean Course was held from August 3 to the 15th with 11 participants from South Korea.