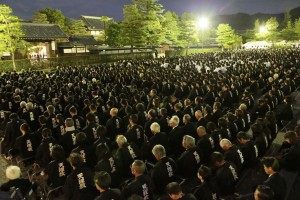 On June 27, a ceremony known as the transfer of the soul was held for the third Shinbashira at 7:30 p.m. at the Shinbashiraʼs residence with an attendance of about 4,700 people including Church Headquartersʼ officials, head ministers of directly supervised churches, staff members of Church Headquarters, students of Tenrikyoʼs schools, and other followers who had returned to Jiba for the ceremony. The evening service, which is normally performed at 7:30 p.m. this time of year, was moved forward by one hour. Participants filled about 1,800 folding benches that had been set up in the courtyard and the front yard of the Shinbashiraʼs residence, as well as in the Sanctuary precincts in front of the residence.

The ceremony began when the officiating ministers entered the venue. After the chief officiant read the prayer for the transfer of the soul, the lights were turned off and the transfer ceremony was performed to the accompaniment of the solemn sounds of gagaku music.

After the food offerings were placed on the altar, the chief officiant offered a sacred branch and read the prayer for settling the soul, in which he stated how the third Shinbashira, as a parent of the path, had dedicated his life to sincerely nurturing and guiding followers for the growth of the path while interacting with them with warm parental love regardless of their age. The chief officiant also said in the prayer that followers of the path and others who were acquainted with the former Shinbashira were deeply honoring and yearning for his large parental heart.

Sacred branches were then offered by the Shinbashira, followed by his wife and Successor-designate Daisuke Nakayama, and other family members.

At the end of the ceremony, Director-in-Chief of Religious Affairs Hiroaki Yamazawa, who was in charge of the ceremony, expressed deep appreciation on behalf of the family members and Church Headquarters for all the condolences received from many quarters including the Tenrikyo community. He went on to say: “We are at a crucial point where we are going into the second half of the pre-anniversary period leading up to the 130th Anniversary of Oyasama. Having pondered over and tried to understand Godʼs intention embedded in the third Shinbashiraʼs passing, we are determined to do what we have to do in this season in unity of mind.”

The next day, another ceremony took place at the residence at noon. Among the 4,200 people who had gathered were those who had enjoyed friendship with the third Shinbashira.

After the family members bid farewell to the third Shinbashira, the coffin was placed in a hearse. They then climbed into vehicles forming a funeral cortege. His photograph was carried by Successor-designate Daisuke Nakayama. At 1:35 p.m., the motorcade departed from the Shinbashiraʼs residence and made its way through the South Gate. Great numbers of followers lined the route of the cortege to pay tribute to the third Shinbashira.