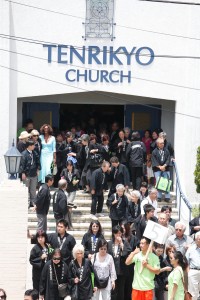 On June 15, Tenrikyo Mission Headquarters in America celebrated its 80th anniversary in the presence of the Shinbashira and his wife. The anniversary drew approximately 1,100 Yoboku and followers from various parts of the United States and Canada. Taking to heart the words of the Shinbashira and giving thought to early followers who devoted themselves to the mission in North America, the participants pledged themselves to work toward the further growth of the path in the region.

In November three years ago, the mission headquarters held a pep rally and announced its Goals for Spiritual Maturity —“Let us grow spiritually through spreading this wonderful faith and passing it on to the ‘next’ generation to bring joy to the Parent”— along with its Activity Objectives and Concrete Goals. Yoboku and followers in the region started various activities geared toward the anniversary with their minds united.

Particular efforts were put into nurturing young people based on one of the activity objectives, “To pass our faith on to the next generation.” They were actively encouraged to participate not only in Shuyoka, the three-month Spiritual Development Course offered in Jiba, but also in the region’s nurturing programs such as Joy Workshop, Three Day Course, and America Shuyokai, the four-week Spiritual Development Course held at the mission headquarters. In the past three years, 157 people participated in Joy Workshop, 39 in Three Day Course, 46 in America Shuyokai, and 11 in Shuyoka.

Also, regarding one of the concrete goals, “To increase the number of Sazuke administrations,” the mission headquarters had set the goal of administering the Sazuke 100,000 times, which was achieved by last December thanks to the earnest efforts made by followers in the region. In the midst of heightened enthusiasm for salvation work, the Oyasama 130th Anniversary Yoboku Gatherings were held at 20 venues in the region, drawing a total of 598 people.

At the mission headquarters, followers were warmly welcomed by yellow California poppies and staff members who were wearing matching green T-shirts, which bore the theme for the anniversary, “Nurture the Future.” A Mexican tuna weighing about 100kg (220 lb.) was one of the offerings at the sanctuary.

At 10:00 A.M., the Shinbashira and his wife entered the sanctuary to the accompaniment of gagaku music. The congregation paid their respect to God the Parent, Oyasama, and the Mitama-sama in unison with the Shinbashira.

Bishop Hiroshi Fukaya read the service prayer in English and Japanese, expressing appreciation for God the Parent’s blessings and Oyasama’s warm parental love that have guided the mission headquarters since its founding. He then said: “We pledged to fulfill our Goals for Spiritual Maturity, Activity Objectives, and Concrete Goals to demonstrate a spiritual growth that would bring joy to our Parent. We are truly grateful that we, of this diocese, were able to dedicate ourselves during these past ‘three years, one thousand days.’ Today, we are honored to receive the words from the Shinbashira. Let us keep the intention of his words in our hearts, as we approach Oyasama’s 130th Anniversary, and let each of us pledge today to walk on the path of spiritual maturity to become people who save others, so that we can bring joy to Oyasama.” 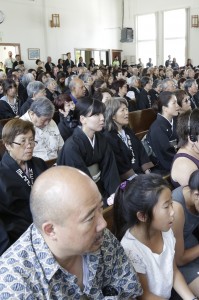 Next, the Shinbashira addressed the congregation. He started by saying: “Today the Mission Headquarters in America is celebrating its 80th anniversary since its establishment in 1934, but the history of the path in North America goes back a great deal further and can be traced back to about 1897. This means that seeds of faith in this path were already being sown in this region around the time of the 10th Anniversary of Oyasama.”

Then he explained the significance of the anniversary service, saying that, when Tenrikyo spread at a rapid pace after Oyasama’s withdrawal, in distant North America as well, there were people who adored the everliving Oyasama and wanted to make every effort to respond to Her parental love. Mentioning the role of a mission headquarters, he stressed that it should play a core part in “weeding and fertilizing” in order to help followers in the region to connect with one another and encourage one another. He also emphasized another part of the role of a mission headquarters by saying that since it has “the truth of a church name” it needs to conduct the activities of single-hearted salvation and serve as a model of the Joyous Life in the region. He expressed his hope that it would fulfill these two missions in the spirit of single-heartedness with God. Then quoting from a Divine Direction, he told the congregation that, in addition to being thankful for the fact that they are able to follow the path thanks to their predecessors, they should take firm steps along the path that has been passed down through the generations and work toward the future path.

Looking at the current season leading up to the 130th Anniversary of Oyasama, the Shinbashira stated: “The path of salvation . . . will only open if we Yoboku make repeated efforts to sprinkle the fragrance of the teachings and help save others. . . It is important for all of us to make a personal effort to sow the seeds of the Joyous Life by working with those around us.” He concluded his address by saying: “To take advantage of the 80th anniversary of this mission headquarters to ensure that the path in North America extends and expands further and develops greatly, I hope that all of you will carry out meaningful and fulfilling activities in unity of mind.” 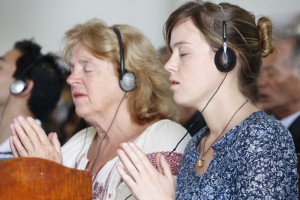 The Shinbashira and his wife led the seated service, which was followed by the Teodori, the Dance with Hand Movements. The joyous harmony of the musical instruments and the singing of the Mikagura-uta, the Songs for the Service, sounded clear under the bright blue Californian sky.

After the service, a reception was held in the outdoor areas of the mission headquarters with a variety of entertainment including a Japanese drum performance.

The Shinbashira took the podium to deliver an address. Referring to the mission of the Young Men’s Association members, he told them to make good use of their youthful energy and enthusiasm for action in striving to do their utmost to spread the fragrance of the teachings and help save others.

Next, Mrs. Nakayama addressed the convention encouraging the Women’s Association members, to make a personal effort to nurture themselves into true Yoboku and work on nurturing people close to them. She said: “Those of us who are following this path . . . must, therefore, pay strict attention to the way we follow the path so that we will not take our present circumstances for granted or forget the difficult circumstances our predecessors went through. We must also continue our efforts to grow spiritually to be Yoboku who can play a role in realizing the world of the Joyous Life. In addition, we must pour our utmost efforts into nurturing others while bearing in mind that the way we can repay God the Parent for the blessings we receive is to nurture our own children and those close to us into true Yoboku.” 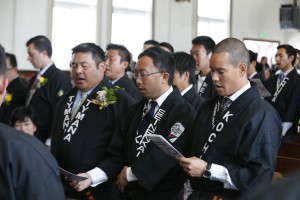 Bishop Hiroshi Fukaya said: “Having our Goals for Spiritual Maturity, Activity Objectives, and Concrete Goals helped bring momentum to young generations and made them more active. We would like to provide Yoboku in our diocese with new opportunities to learn the teachings so that we can help them make spiritual growth. We also want to continue making united efforts in the hope that this momentum will accelerate our pre-anniversary activities leading up to the 130th Anniversary of Oyasama.”