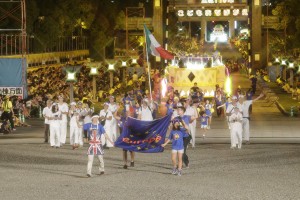 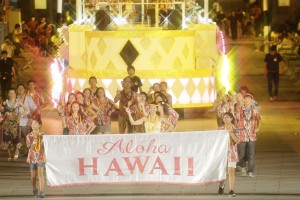 This year’s Children’s Pilgrimage to Jiba was held between July 26 and August 4 under the theme “Filled with Joy! Hinokishin!” During this 10-day period, a total of 233,804 children and adult leaders returned to the Home of the Parent, including participants from 16 overseas countries and regions: Brazil, Canada, France, Germany, Hawaii, Italy, Hong Kong, Mexico, Mongolia, Myanmar, Nepal, South Korea, Taiwan, Thailand, the U.K., and the U.S. Mainland.

This year marks the 60th anniversary of the Children’s Pilgrimage to Jiba, which was first held as “Children’s Hinokishin Pilgrimage to Jiba” in 1954. That was the second year of the “three years, one thousand days” season leading up to the 70th Anniversary of Oyasama, a year when the construction of the Oyasato-yakata building-complex—for which the plans had been announced in the previous year—was making steady progress and the Home of the Parent was filled with enthusiasm for hinokishin. The Children’s Hinokishin Pilgrimage to Jiba started out of a desire to afford children of the path the opportunity to savor the joy of sowing the seeds of sincerity in Jiba through engaging in hinokishin—such as carrying even just one basket of earth. The event drew about 75,000 children from across the country.

The venue for the earth-carrying hinokishin in those days was located in front of Tenri High School—where Tenri University’s Somanouchi Gym 1 is now. The members of Tenri High School Band helped lead groups of participants in the event from the Main Sanctuary to the hinokishin venue. In the following year, fife and drum bands that had been formed in many Tenrikyo communities played that role along with the high school band. This is how Tenrikyo’s fife and drum band activities came to be popular. Also, Kyoto Diocese later organized a puppet theater for the pilgrimage, and some other dioceses subsequently followed suit by providing a variety of new attractions and activities. The number of attractions and activities held for the Children’s Pilgrimage today—including the “Morning Service” event as well as those attractions organized by respective dioceses—has risen to 33. The cumulative number of participants in the Children’s Pilgrimage to Jiba reached 10 million in 2005, when this event took place for the 52nd time. 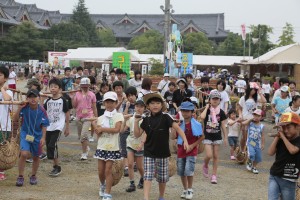 The rainy season came to an end earlier than usual this year, followed by a heat wave across Japan. Despite the extremely hot weather, the Home of the Parent was filled with children’s beaming smiles throughout the event. 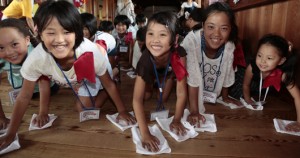 At the venue for earth-carrying hinokishin—which is one of the original activities of the Children’s Pilgrimage—there were many children carrying earth in straw baskets suspended from 1.5-meter (5-ft.) wooden poles along a 380-meter (1,247-ft.) course.

At the corridor-cleaning hinokishin site in the Sanctuary Corridor, cheerful voices of children shouting “One, two, three, four” were heard. During the weekend of July 27 and 28 when crowds at the event reached the first peak, a total of 543 groups comprising 11,667 people engaged in the hinokishin.

At the designated tea tents scattered throughout the Sanctuary precincts and the event venues, the participants in the Boys and Girls Hinokishin Corps and the Wakagi Ojiba Hinokishin Corps cheerfully yelled, “Have some tea!” while serving ice-cold tea. This scene has been a familiar one during the Children’s Pilgrimage since this hinokishin began in 1971. The corps members savored the joy of helping others through the hinokishin.

After the evening service every day during the pilgrimage period, fireworks lit up the sky, followed by fanfare provided by Tenri High School Brass Band signifying the start of the Oyasato Parade. Children seated on bleachers lining the parade route were drawn to the spectacular performances. This year, there were three new parade floats, including one on which the event’s popular mascot, Pikky, looked as if he were flying. 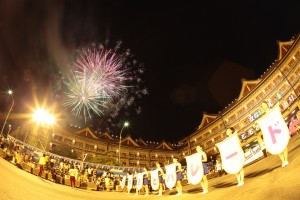 At the “Morning Service” event, great numbers of children listened to a talk given by the Shinbashira after attending the performance of the seated service. The Shinbashira began his talk by saying, “This place where you have assembled is the Home of the Parent, where our original Parent, God the Parent, resides, and it is also the home of all humankind.” He then explained in a way children could easily understand that God the Parent first created human beings at Jiba a long time ago and desires to see us actualize the Joyous Life World where all people in the world, who are the beloved children of God, live happily through helping one another.

Referring to the population of the world, approximately seven billion, the Shinbashira said: “All seven billion people in the world are God the Parent’s children. As God’s children, we are also brothers and sisters.” He went on to say: “You probably get scolded by your parents when you get into a fight with your brother or sister, don’t you? It is because your parents feel sad to see you fight and want you to get along with each other. By the same token, God the Parent wants all people in the world, who are children of God, to be happy. More than anything else, it is God the Parent’s desire to see us, as brothers and sisters, help and respect one another without getting into a fight so that we will live joyously together. You should thus get along with your friends as well as your own brothers and sisters. In addition, if you find your friends and people around you in trouble, I hope you will be able to practice mutual help by listening to them and helping them.”

The Shinbashira further mentioned that every year he has seen participants in the Children’s Pilgrimage leading younger children by the hand, giving them piggyback rides, and helping adult leaders. He then said, “If you put the spirit of mutual help into practice on a daily basis within your family, with your friends, and in your school, the circle of mutual help will expand, and thereby the Joyous Life World, which is desired by God the Parent, will eventually be realized.” 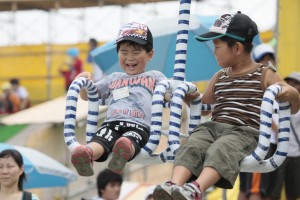 The Shinbashira concluded his talk by saying: “I am sure you will enjoy a lot of activities and attractions during the Children’s Pilgrimage to Jiba. In addition to having fun, my hope is that you will learn about mutual help, take back home what you learn, and try to put it into practice in your everyday life.”