This year’s High School Division of the Students Training Course was held at the Home of the Parent between August 9 and 15 with a total of 1,362 participants (619 male students and 743 female students) from all parts of Japan. The course was supported by about 600 staff members, including a male and a female counselor for each of the groups into which the students were divided according to the number of times they had participated in the course and their school year. In the midsummer heat of Jiba, the students spent a week nurturing their faith and friendships with one another through various activities.

Koji Nakagawa, a first-time participant, had been diagnosed as having an irregular heartbeat last October. He therefore had to give up track and field, which he started when he was in junior high school, and began to support other athletes as an equipment manager. In addition to his own health issues, his grandmother broke her hand at the end of this July, and his grandfather undergoes dialysis treatment on a daily basis because of kidney problems. One of his relatives suggested to him, “I think that this is God’s call for you to return to Jiba.” Koji then made up his mind to participate in the course to offer prayers for his grandparents’ recovery.

Resolved to have his efforts be accepted by God the Parent and Oyasama, Koji volunteered to serve as a group leader during the course. He helped establish a friendly atmosphere in his group with its members caring for and helping one another. 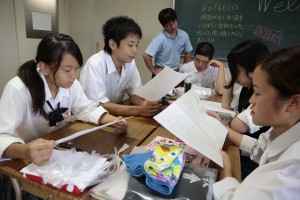 During lectures, the members also shared some of their deepest feelings within the group. Koji could relate to a member who said, “I have rarely tried to learn about the teachings of the path before.” Through listening to other members and his homeroom instructor’s stories of how people were saved through their faith in the path, however, Koji began to think that he wanted to know more about the teachings. Moreover, his group counselor whom he had told about his irregular heartbeat administered the Sazuke to him in the East Worship Hall after the evening service on the third day of the course. The other members of his group joined the counselor in prayer for his recovery. His heart was filled with gratitude.

One night, group counselors handed out snacks to the students in their dormitory while saying: “These snacks are special because they were offered to God the Parent. Feel free to take them back home to give someone you know who is suffering from illness.” One of his group members then handed one to Koji and said, “I hope you will get better.” Koji was touched by the member’s thoughtfulness.

Through the Students Training Course, Koji came to understand what people at his church and his group counselors meant when they said, “You will forever treasure the connections you make during the Students Training Course.” He said: “I wouldn’t have participated in this course if my family and I hadn’t received these afflictions. It was as if something had been guiding me back to Jiba.”

Nagi Shinke, a second-time participant, was diagnosed as being hard of hearing when she was four years old. She can only hear certain frequencies. Because of this, she had difficulty opening up her heart to people around her. Last year, her father encouraged her to attend the Students Training Course—in which he himself had participated—saying, “You will find friends you can open up to.” She then participated in the course and eventually brought herself to share her struggles within her group. All the members listened to her in tears, which made her realize for the first time in her life that there were people crying for her. Filled with the expectation that she would have a great time again, Nagi came back to the course this year.

Yoko (not her real name), a member of Nagi’s group, had trouble with her leg and attended the course in a wheelchair. Yoko once said to the group, “I’m sorry for putting you to so much trouble.” Nagi then explained what she had learned through the course last year to Yoko, while using gestures and writing words on her whiteboard, “We should feel grateful for other members’ help rather than sorry.”

During a lecture, there was a question from a member of Nagi’s group, asking, “If God the Parent wishes us to live the Joyous Life, why does God show us illnesses and troubles?” The instructor responded: “The idea that people who are healthy and can move their bodies freely are happy whereas people with disabilities who may not be able to move their bodies as freely are unhappy comes from our self-centered human thinking. I believe that God the Parent provides us with guidance that is appropriate to each and every one of us.” Nagi then said: “Although I have a hearing problem, I’ve never thought that I’m unhappy. I am happy that I’m kept alive by the blessings of God the Parent and could make precious friends through this training course.” She wrote another message on her whiteboard and showed it to Yoko: “If we live each day in a manner that keeps our mind connected to God, God the Parent will surely present us with many opportunities to meet precious people.” The message brought a smile to Yoko’s face.

Reviewing this year’s Students Training Course, Nagi said, “I learned the importance of mutual help again. I want to go all over the world to help people who are suffering from illnesses and troubles in the future.”

A third-time participant called Taro (not his real name) was diagnosed this spring with Asperger syndrome, which is a form of developmental disorder. As he reflected, there were things that started to come to mind—such as forgetting people’s names or where he put a pen and not being able to socialize and communicate as well as his friends of the same age—and he thought that he might have hurt others with his words and actions. Taro acted as if he had not taken the diagnosis seriously because he did not want to make his family worry. However, he was actually in major shock and scared of what people would think if he let them know about his problems. Despite his situation, Taro decided to participate in the Students Training Course because he thought that friends of the path would listen to and accept him.

During a discussion session on the second day of the course, Taro confided in his group about his diagnosis and his worries. Everyone listened closely to him—some even cried for him. He was filled with a sense of relief.

Taro could spend the whole course smiling with the group members. They walked together with their arms around one another and shared jokes and laughter with one another. Taro said, “I haven’t laughed this much for a long time.” During the course, he also saw and heard about other participants who are troubled by illnesses and hardships. Taro then realized that although he sometimes forgets things easily and cannot speak well, he is fortunate because he is blessed with a healthy body. 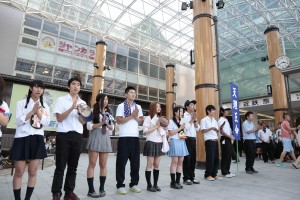 On the 13th, the third-time participants went out and spread the name of God in Tenri City and Nara City. Playing the wooden clappers, Taro remembered what he had talked about with the group members the previous day: “If we feel embarrassed, we look embarrassed to people. Let’s sing the Eight Verses of the Yorozuyo with confidence while putting our heart and soul into it.” He devoted his utmost efforts to spreading the name of God.

“The Students Training Course offers us an opportunity to reflect on ourselves. I want to receive the truth of the Sazuke as soon as possible so that I can help save people suffering from illnesses and troubles. I will strive to become a Yoboku like a tree whose trunk is thick enough that it won’t be blown down even in a storm,” Taro said. 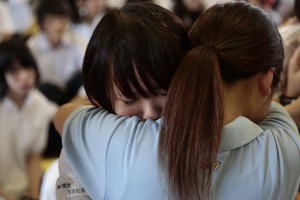 On the 15th, the participants attended the closing ceremony, in which they received their certificates of completion with a sense of fulfillment. They also pledged to one another to meet again in Jiba, the Home of the Parent.